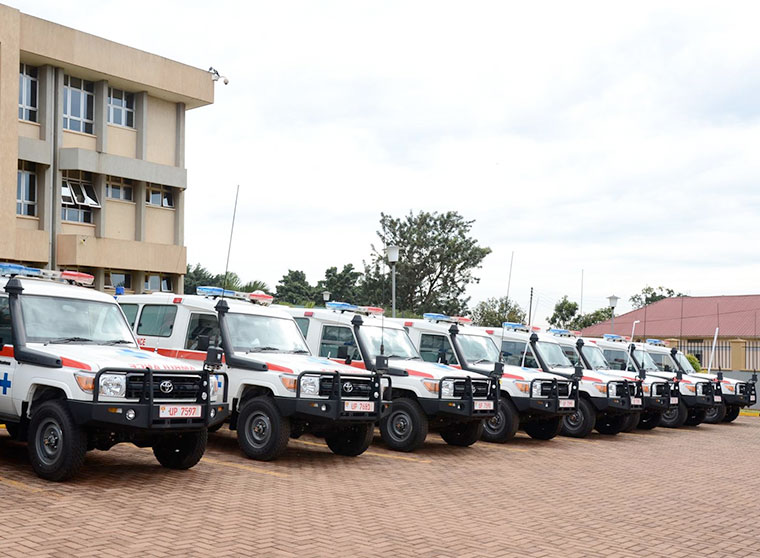 Police commanders have been urged to take action against drivers who are using the force’s vehicles to smuggle goods and ferry passengers from one place to another.

Byaruhanga describes drivers as the most chaotic and stubborn group in the Uganda Police Force, adding that they have turned themselves into bosses, an indicator that commanders are not doing their supervisory role.

“These drivers are supposed to give you support but they have become your bosses. They have turned vehicles into public service. They are fetching firewood. They are smuggling, and all this is because you are not supervising them,” Byaruhanga said.

There have arguments about the conduct of police drivers particularly those chauffeuring ambulances and patrols. As ambulances drivers are accused of turning them into public cars and using them for smuggling, patrol drivers have been accused of staging roadblocks and extorting money from road users particularly during night hours.

Besides, patrols have been accused of causing accidents, leaving several people injured or dead. The traffic and road safety report of 2019 shows that 234 police vehicles were involved in accidents. Police drivers were put in the category of careless and reckless drivers that caused the death of 3,407 people in a single year.

“These drivers switch on sirens and they are never stopped. You call a commander to inquire about an ambulance and they don’t know where they are and what they are being used for,” Byaruhanga adds.

Byaruhanga says the police force has a few vehicles especially ambulances which must be accounted for all the time. The police have only 30 ambulances and some are often grounded. More than 30 police drivers have been charged in police court in the last three years because of misusing force’s cars and engaging criminal related activities.

Absolute chaos.We are lucky to have Museveni to run the country but we all have to help Not only to nag and criticize.You bla bla blabers do something about it you know everytnuhg and you are so smart that you nag about everything Now you are silent? Hahahahaha
Report to administrator
0 #3 Lysol 2021-03-30 02:45
Quoting Wainanchi:

What would happen in Uganda if YKM is not in power ? Just imagine and what did Ugandans do before YKM cane to take reignd of Uganda?

Absolute chaos.We are lucky to have Museveni to run the country but we all have to help Not only to nag and criticize.You bla bla blabers do something about it you know everytnuhg and you are so smart that you nag about everything Now you are silent? Hahahahaha

Uganda would be much better off without your corrupt and killer Museveni.

What would happen in Uganda if YKM is not in power ? Just imagine and what did Ugandans do before YKM cane to take reignd of Uganda?

Absolute chaos. We are lucky to have Museveni to run the country but we all have to help Not only to nag and criticize.

You bla bla blabers do something about it you know everytnuhg and you are so smart that you nag about everything Now you are silent? Hahahahaha

But Wainainchi, the story is not about "What would happen if our "Problem of Africa" Gen Tibuhaburwa (Tawulira) is no longer in power. It is about the chaos in the UP where Tibuhaburwa is the Commander in Chief.

In other words prove me wrong. In the footsteps (Fata Nyayo) of our "Problem of Africa", Gen Tibuhaburwa, who is in our State House only fighting for himself and family; the Police drivers and all the public servants in Uganda, are simply out-competing each other in self-service.
Report to administrator
0 #5 Lakwena 2021-03-30 08:05
E.g., except in Ugandan; have you ever heard anywhere in the whole wide world (WWW), where the president took to the street to protest about the magnitude and crippling level of corruption in his own government?

That is the chaos you should be referring to: A president who is not only impotent in fighting corruption, but himself very corrupt and/or corrupts others. That is how and why he can't stand up to systemic corruption.
Report to administrator
0 #6 WADADA rogers 2021-03-30 08:21
Not surprising to many of us, this country is rotten from head to toe.

This practice of using ambulances to smuggle was the order of the day in the 80s and 90s until URA cracked the whip.

BUt when all is said and done, the practice is in agreement with a kiganda saying that kyoyina kyekikweyimirira.

That literally means that one should use what they have to get what they dont or to add on to what they already have. Many of these drivers are being used by their bosses but when they also get an opportunity, they play the same game. That is why most of their ambulances have tinted glasses..
Report to administrator
+1 #7 jose 2021-03-30 10:26
Talk of the sirens!!!
These people utterly misuse the sirens they actually rushing nowhere, there is no emergency, they are not running any errand, but they find some jam on road and you hear them blowing the whole country stupid.

Like you say the patrol vehicle are parked at their houses all the time as if these cars are personal,
What happened, during those days you could only drive a police vehicle while in full uniform, which meant you are on duty, but now you find some body driving a patrol vehicle in funny things, and his children are the oficers
Report to administrator
0 #8 rubangakene 2021-03-31 17:11
Misuse of ambulances is not a new thing. During Obote 2, there was an ambulance meant for Ishaka Hospital used for ferrying tomatoes and katogo for a certain minister living on Namirembe Road.

In Nairobi, for example, ambulances are used to transport 'changaa' (kisumu enguuli) from east of Nairobi to Westlands in broad daylight, sirens and all hazard lights blazing, moreover escorted by police!
Report to administrator