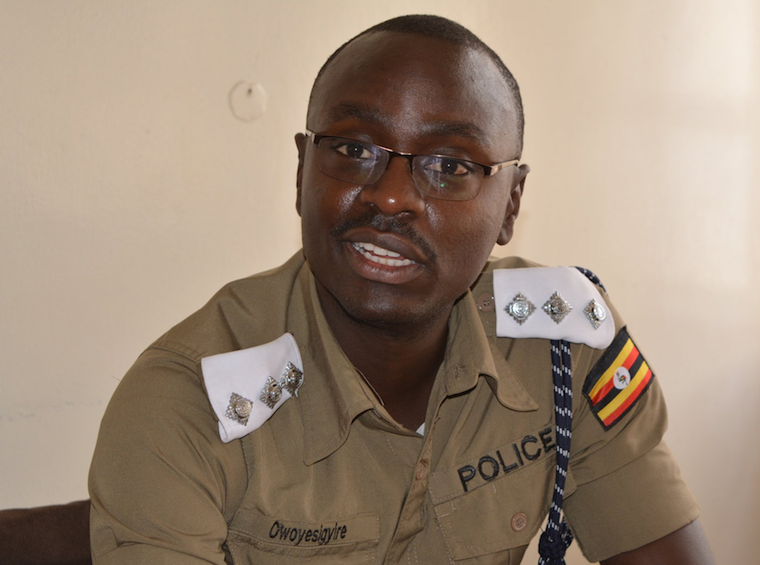 Police have warned the opposition against mobilising the populace to stage anti-Museveni protests. According to a police statement, opposition politicians are planning nationwide demonstrations starting with the Kampala Metropolitan area to contest President Yoweri Museveni's election victory. Museveni was declared by the Electoral Commission as the winner of the highly volatile and controversial January 14 elections.

Police claim the organizers of what they called illegal demonstrations, are mobilizing the public using social media and leaflets with wordings that reads "Time is now. Join nationwide protests to fight for our victory. M7 Tajja Kulayira [Museveni will not be allowed to swear in]," the statement reads in part.

Kampala Metropolitan deputy police spokesperson, Luke Owoyesigyire says that they have finished laying down all strategies to counter any planned protests.

"We have deployed heavily to counter these illegal acts and we are continuing with vigilance. We want to warn the organizers of these unlawful demonstrations to desist from participating in any unlawful activities," says Owoyesigyire.

Owoyesigyire further added that the police will not hesitate to arrest and charge in courts of law anyone, who will be found participating in these illegal activities.

"We have deployed strategically to counter these illegal acts and we’re continuing with vigilance. We want to warn the organizers of these unlawful demonstrations to desist from participating in any unlawful activities. Those who want to convey any message should use the known channels, the legal channels to convey any message they want other than engaging the public in any illegal activities," said Owoyesigyire.

This is the second time security agencies are coming out to warn against the anticipated violence to show dissatisfaction of the January 14 presidential and parliament elections.

In last year's November 18 and 19 protests that engulfed the entire country, at least 54 people were killed and more than 1,500 arrested. Security has continued to hunt down and kidnap opposition supporters, with Museveni saying last week that some of those arrested have revealed to the government the schemes of their leaders in trying to destabilise the country. He promised to unconditionally release at least 51 youth currently in military detention and secure a soft landing for others in courts of law. However, gruesome stories of torture have also been relayed by those who managed to secure their freedom from custody.

Again sabalwanyi am warning you for the last time, time is running out on you to avoid going the Gaddafi way act like now.

Otherwise if one missile is fired from somewhere that will be it for you!!!!!!!

Listen, Sir. The seat of power is situated in a zone of cowardice.

I would like to do that to you too, with my cork and a secure condom, of course. Am I welcome, Sir?

Please let us maintain our civility here, linguistically speaking. I rest this chat.
Report to administrator
0 #6 kabayekka 2021-03-09 15:49
The Uganda Military Police should stop its well known political campaign and try to work with the opposition to see how best the national votes can be recounted.

This is good for all the parties who participated in this national expensive rigged election. Why spend lots of money again to keep quiet or shoot to kill those who seem to have legitimate grievances? Is this country running mad out of the current modern civilization?
Report to administrator
+1 #7 juwait kali 2021-03-09 22:58
KASEDE this zone of cowardice has produced bobi wine and all those innocent souls that were murdered in cold blood on the 19 & 18 th of November.

Am all eyes wide open for you to show me similar brave hearts from else where in this hopeless country.
Report to administrator
0 #8 juwait kali 2021-03-09 23:01
Wanainchi and Manor Mia you are a bit too jumpy 4mi liking are u not enjoying ur hard earned victory?

I think ur gonna regret why you rigged this time, and am not joking.
Report to administrator
0 #9 Kalibbala 2021-03-09 23:46
In the 90 ties One Sebutinde Commission found out That the Uganda Police and Judiciary are the Most Corrupt Institutes In The Whole World!!

During the Kale Kayihura reign Police Officers used to con Foreigners and Kill them using bafere like Gashumba and Drek Lubega!

One Businessman Called Wamala was Brutally Murdered on Orders Of Late Kaweesi!! So Mr. Owoyesigire There is NOTHING Called POLICE in Uganda...YOU ARE ALL CRIMINALS and KILLERS on A Mission To Fulfill Kisiraani's Orders!The World is Watching is YOU..
Report to administrator