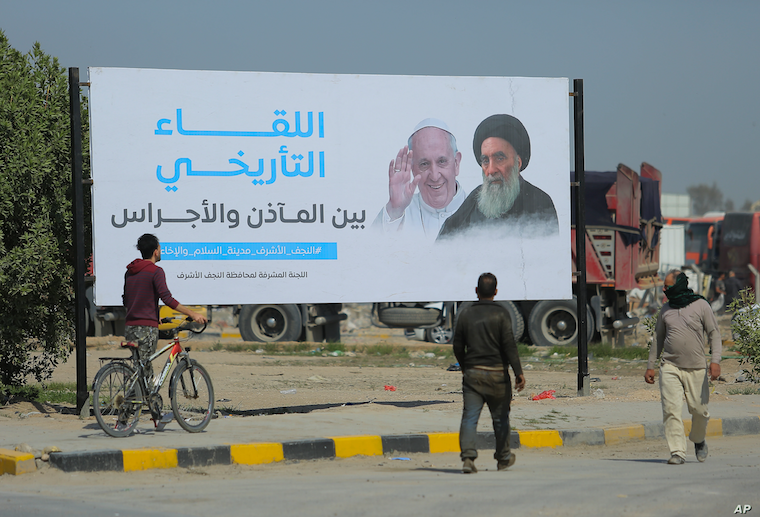 Pope Francis Friday began a long-desired trip to Iraq, the first to the birthplace of the Prophet Abraham by any head of the Catholic Church.

It is the first trip by Pope Francis to a foreign country since the pandemic, and everyone on the papal plane was vaccinated against COVID-19. In his own words, Pope Francis said he arrived in Iraq as a “pilgrim of peace" for all Iraqis, although the country’s beleaguered, dwindling Christian community will take special encouragement and comfort from his presence.

The visit is also the first by a Roman Catholic pope to a majority Shiite Muslim country and will be crowned by the pontiff’s meeting with Ayatollah Ali al-Sistani, one of the most revered authorities in Shiite Islam, who stands in opposition to Iran.

To meet with al-Sistani, Francis will travel Saturday to Najaf in southern Iraq, 100 miles south of Baghdad, an important pilgrimage town for Shiite Muslims. The visit comes as part of the pope’s efforts to forge improved relations with Muslims.

It had been hoped al-Sistani would sign onto “A Document on Human Fraternity for World Peace and Living Together,” which calls on Christians and Muslims to work together for peace.

It was already signed by Pope Francis and the Grand Imam of Al-Azhar Ahmad el-Tayyeb, the top authority in Sunni Islam in 2019. But that is not expected to take place. Al-Sistani will issue a verbal statement instead. The very meeting itself is highly significant, as the religious scholar rarely receives visitors.

Iraqi Dominican priest Ameer Jaje, an expert on Shiite relations and an advisor to the Pontifical Council for Interreligious Dialogue, helped to arrange the meeting with Sistani.

He told VOA that “tensions exist between Shiites espousing al-Sistani’s school of thought, which opposes direct rule by clerics, the system in place in Iran, and those who are pro-Iranian and who want to impose that system in Iraq.”

Jaje added that the pope’s meeting with al-Sistani “will certainly greatly encourage Christian clergy, interreligious dialogue and also the Christian presence in Iraq. That is very important for us Christians.”

Analysts say al-Sistani’s opinion holds powerful sway on Iraq’s streets and beyond. Marsin Alshamary of the Brookings Institution, a Washington think tank, called the meeting “an unprecedented event and a big deal.”

Christopher Lamb, author of the book The Outsider on Pope Francis, said that the pope's encounter with al-Sistani underscored a meeting of the minds on what "true religion is... that of peace and brotherhood," unlike the destructive violence espoused by some Shiite militias and Islamic State militants that has torn Iraq apart.

Jaje said he believes the pope has a special message for Iraq’s youth, who are tired of sectarianism. He said, “many youth have sacrificed their lives for Iraq’s sovereignty and the desire to live together as one people: Iraqis, whether Sunni Muslim, Shiites, Christians or whoever. I believe the pope will encourage Iraq to reclaim its sovereignty and put an end to violence.”

In his message, Francis added that he was coming to Iraq “as a pilgrim of peace in search of fraternity, animated by the desire to pray together and to walk together, also with brothers and sisters of other religious traditions, in the land of Father Abraham, who unites Muslims, Jews and Christians in one family.”

The number of Christians in Iraq has significantly dropped, to around 300,000. The pope referred in his message to a “martyred church” that he will be honoured to meet.

He said there have been too many martyrs and that Iraqi people still have in their eyes “the images of destroyed houses and desecrated churches,” and in their hearts “the wounds of broken hearts and abandoned homes.”