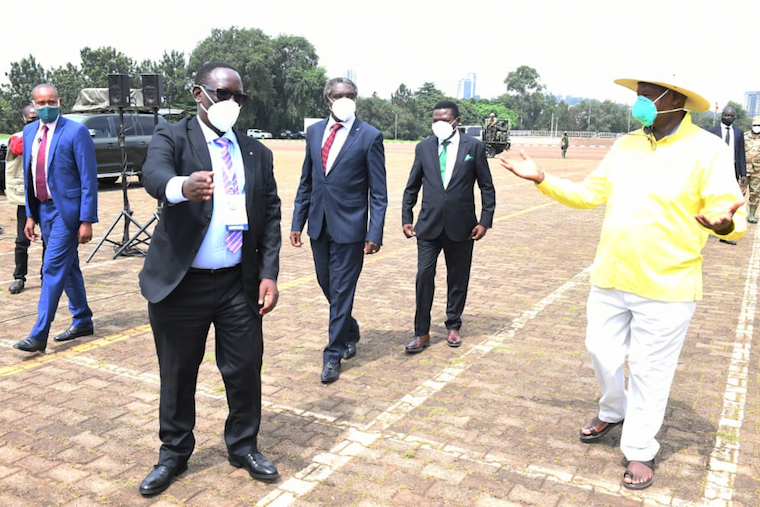 President Yoweri Museveni has announced that security will unconditionally release some 51 people recently arrested from across the country.

The president made the revelation at Kololo Independence Grounds after chairing the 3rd Summit of the Inter-Party Organization for Dialogue (IPOD). Museveni said the issue of arrested persons was one of those discussed in the meeting with the president of Uganda People's Congress (UPC) Jimmy Akena and Democratic Party (DP) president general Norbert Mao.

Museveni said some of the arrested people in military detention will be freed unconditionally and compensated to help them settle back into society. For those before different courts of law, Museveni promised to liaise with the Directorate of Public Prosecution (DPP) to review each case and recommend a "soft" landing for them.

He says that the people who were arrested have since helped government to learn more about the plans of their leaders whom he referred to as "miscalculators".

Last year on November 18 and 19, protests erupted in different parts of the country following the arrest of presidential candidate Robert Kyagulanyi of the National Unity Platform (NUP) in Luuka district during a campaign trail. At least 54 people were killed and more than 1,500 people arrested according to official figures.

Museveni says the protests were a result of "miscalculators" who might have thought that their attacks on supporters of the ruling National Resistance Movement (NRM) would scare people from voting and probably make the NRM government collapse.

According to Museveni, the NRM government always makes a distinction between the misleaders and the misled. That's why they have decided to release those who were misled and review files.

The president however did not make a statement about the compensation for people who were killed during the November riots. Previously, Museveni had promised that government would compensate 22 victims of the protests whom he said were innocently killed by 'stray bullets.' The remaining 32 were labelled rioters and terrorists for whom there would not be any compensation.

Mao said in the spirit of IPOD to have Uganda first, he attended the meeting which was shunned by the opposition Forum for Democratic Change (FDC) and Justice Forum (JEEMA). Mao said they put before the president the acts of violence meted against politicians by the security personnel, the brutal arrests and the kidnaps that have become rampant in the country.

UPC president Akena said he was grateful that they met as political parties and discussed challenges faced in the country. IPOD is an organisation that brings together political parties with representation in parliament. Current members are the NRM, UPC, DP, JEEMA and FDC.

However, FDC and JEEMA declined to attend the summit. FDC said that resolutions from previous summits have not been fully implemented and that the summit had been turned into a social event. JEEMA said they had not agreed on the agenda of the meeting and hence could not take part.

12
0 #11 Akot 2021-03-08 17:37
[quote name="Miki"] UPC and DP are a dying breeds. What an irony in that UPC's Akena Obote and DPs Norbert Mao, both of whom face serious questions as leaders of their respective organizations, now have to depend on appearing with President Museveni for legitimacy in their own parties?

Both UPC and DP need to be rebuilt and reconfigured from the ground up. But it is now clear that such re-invention cannot happen under Mao (in DP) or under Akena Obote (in UPC). These two failed politicians would be better off joining Museveni in the yellow plague called NRM. /quote]

Where & what are the 'ensible Ugandans' doing while Museveni is assured to rule for 40 years & without real opposition?

These fake opposition leaders are looking up to Museveni while waiting for 2026 fake election that they will still ensure Museveni' wins!

So, what are 'sensible Ugandans' doing, waiting too?
Report to administrator
12