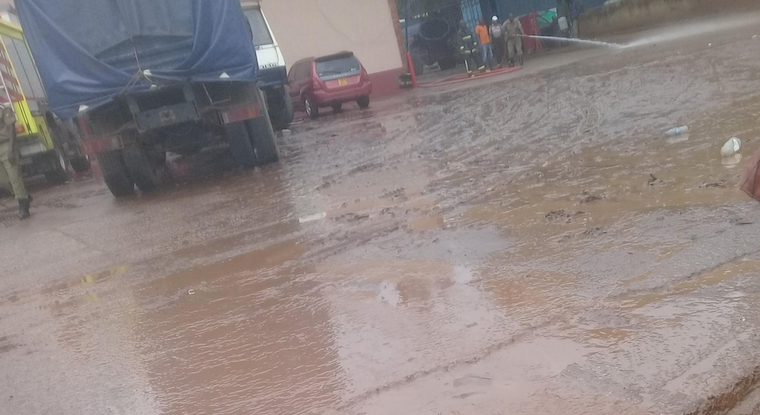 Police officers attempt to wash out the garbage

The Thursday morning heavy rainfall left the police’s fire and emergency response directorate at Nakivubo filled with all sorts of washed-up garbage and mud.

The directorate which is located opposite the Clock Tower near Queens Way in Kibuye was flooded for the better part of Thursday morning with police officers forced to wash out the garbage as the water slowly dried out.

Firefighting trucks that are often parked in the compound were also partly submerged. After it stopped raining, policemen used pressurised water pipes to wash out the garbage and mud. It was also difficult for pedestrians to cross the trench in front of the fire directorate as it was full of water and mud.

At Tufnell road in Kamwokya, drivers were seen struggling to drive across open potholes that Kampala Capital City Authority had widened for patching repairs. Some drivers were seen turning back to look for safer alternative routes. The situation was not very different from at Kira road where the widened potholes had been filled with water.

At Yusuf Lule road near Mulago roundabout, pedestrians, riders and drivers were fighting for the safe portion of the road which had not been flooded or covered with mud. The widened and unattended potholes have sparked disagreement between traffic police and KCCA. Lawrence Niwabiine, the acting director for traffic police, said dug up potholes cause unnecessary congestion and accidents on Kampala roads.

Niwabiine said KCCA widens potholes but do not put signage and reflectors to warn motorists. However, Jacob Byabakama, the deputy director road management said they do not deserve to be blamed for leaving dug up potholes unattended. Byabakama explains that whenever they are going to do road repairs, it requires them to first dig and measure the size of the potholes in order to get the right materials. He adds that their work is sometimes interrupted by rain.

0 #1 Lakwena 2021-02-22 09:34
In other words, except stockpiling tear gas and demonizing the Police, what value addition has this government done to the Uganda Police Fire Department? Nothing!

Including all the Police Stations and Barracks: what the Brits left 60 years ago, are still, what our officers squeeze themselves in.

In the 21st Century Kampala City should be having more than 20 properly equipped Fire Stations; in strategically located places.

Coupled with gridlock traffic jams; because there is nothing of such strategic plan and effectiveness, many properties burn to ashes as their owners watch helplessly.

E.g., Makerere University Main Building would not have burnt to ashes if there was a Fire Station inside the Campus.

The University has been prone to strikes, but nobody could think: suppose students get out of control and set fire on some of the buildings, including their own dorms?
Quote | Report to administrator
Refresh comments list
RSS feed for comments to this post
Add comment