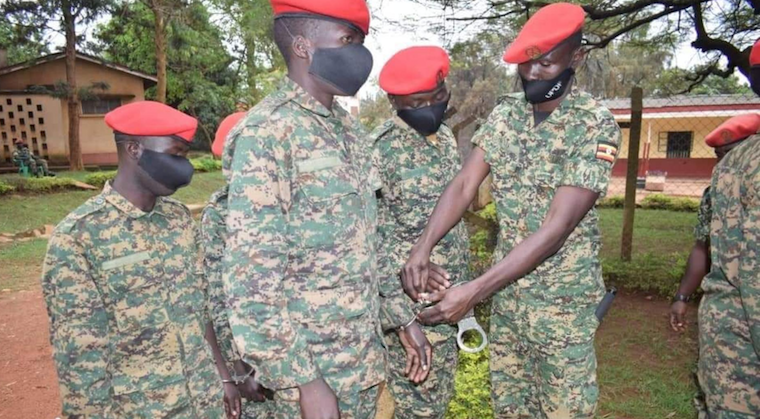 Seven soldiers who were part of a group that assaulted journalists yesterday near the United Nations offices have allegedly been charged and convicted for conduct prejudicial to good order and discipline of the Uganda People’s Defense Forces (UPDF).

Seven journalists from different media houses are nursing wounds after military police personnel pounced on them and arbitrary beat them with batons as they covered National Unity Platform (NUP) president Robert Kyagulanyi who was delivering a petition to the UN over increasing human rights violations in the country.

Among those injured were NTV journalist, John Cliff Wamala who was hit on the head causing a deep cut. Others include; Timothy Mulungi and Henry Sekanjako of New Vision, Josephine Namakumbi and Joseph Sabiti of NBS TV, Irene Abalo Otto of Daily Monitor, Geoffrey Twesigye of NTV and Amina Nalule of Galaxy FM.

Now in a statement, UPDF deputy spokesperson Lt. Col. Deo Akiiki claims seven soldiers have been sentenced to between two and three months.

“The military police unit disciplinary committee (UDC), the lower court of the court-martial, today has convened and deliberated on its officers and militants who misbehaved and assaulted members of the fourth estate at Prince Charles Lane in Kololo Kampala,” the statement reads in part.

The statement however doesn’t mention whether the court was open to the public or not as many journalists learnt about the charging and sentencing after the release of the statement. Curiously too, it is not stated whether the accused pleaded guilty or not guilty to the charges. Also more curiously, the most relevant witnesses who were at the crime scene, the assaulted journalists were not called to testify.

“The chairman warned the culprits and the entire military police at large to always observe discipline and professionalism while on any deployment," the statement says.

"He also added that the above officers' and militants' sentences will act as a deterrent measure to officers and militants while executing their constitutional mandate.”

The Chief of Defense Forces (CDF), Gen. David Muhoozi today apologized to the media for the incident and promised to meet medical bills for those affected. The UN yesterday called for an investigation into the matter with the view of bringing the perpetrators to justice.

12
0 #11 Lakwena 2021-02-22 09:59
And Wainainchi, Am not bragging. I lived in the US for 4 years and therefore familiar with their different armed forces; especially policing units and methods, and as far as their limits/jurisdictions are concerned. From the FBI, Federal, State and County Police (the Sheriffs).

Gen. Kkainerugaba Muhoozi trained in one of the US Military academy, but he is a dumb ass on how and when the military should intervene in minor citizen/civilian related crisis.
Quote | Report to administrator
12
Refresh comments list
RSS feed for comments to this post
Add comment