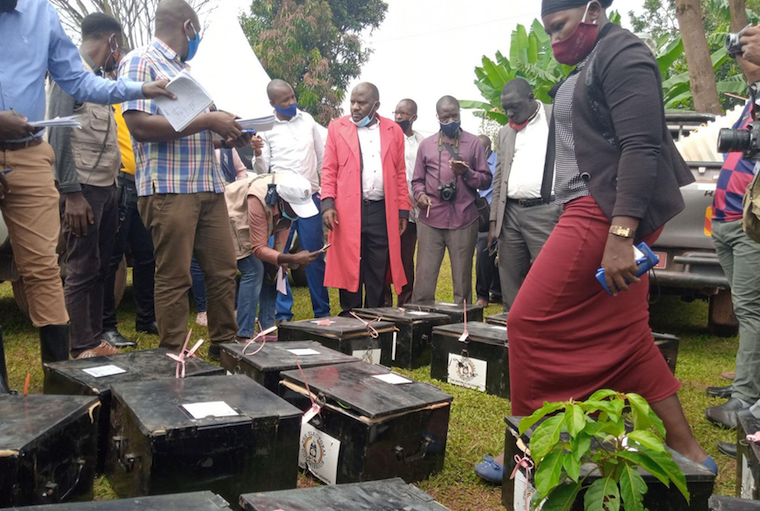 Ballot boxes being examined in Mukono

Results from 23 polling stations in Kampala did not make it to the Electoral Commission’s final tally sheet after their declaration forms disappeared before reaching tally centre in Kyambogo.

Although the results didn’t reach the tally centre, residents and voters interviewed by URN in the specific areas where the polling stations were located are wondering how the said misnomer could have happened. Steven Omulambe, a resident of Kisalosalo-Kyebando cast his vote from one of the polling stations hosted at Cleveland primary school. But he was surprised that a polling station that did not have even an ounce of chaos, could have its results cancelled.

“It was all good at our polling station. There was no chaos or anything. we voted in peace and later the cast votes on all stations were counted and winners were declared. Bobi Wine won all of them,” Omulambe said.

Abdullah Mulondo, another voter recalls that there were four polling stations hosted at the school. But, results from Kisalosalo (SSE-Z)-Cleveland primary school, cannot be accounted for.

“Why that polling station? how could the results from other stations reach and the one for SSE-Z don’t. I don’t know how EC works but I think they were all taken at once?” Mulondo wondered.

Residents were asking similar questions at Namwandu Nkoyoyo’s place, Serina primary school, Excel primary school; all wondering how the DR forms had disappeared. Many said that the voting ended peacefully and all DR forms given to agents who also witnessed the ballot boxes being sealed.

Muhamad Ssegirinya, the Kawempe North MP-elect observes that results for the parliamentary race from the same polling stations were as well never read and are not part of the tally. Ssegirinya adds that he although he had obtained all the DR forms from the said centres, the EC insisted that they had not received a copy of the same from the returning officers.

He, however, adds that while at the tally centre he didn’t realise that presidential race results of the same were also missing.

“My attention had been drawn to the parliamentary race and there was another team which was responsible for collecting the presidential DR forms. We raised the issue but the returning officer noted that results from the affected polling station had no effect on the parliamentary result and so we agreed that they are left out,” he says.

Umar Magala, the National Unity Platform registrar in Kawempe Division was equally shocked to learn that there were results cancelled from the said division. He suspects that there was foul play in the process.

“We won at all those mentioned polling stations and our agents secured all the declaration of results forms. Actually, none of them reported any irregularity. There is something fishy,” says Magala.

In another surprising move, results from Rubaga South Division at polling stations of B.M.K (A-N) and B.M.K (M-Z) were submitted to the tally centre on a single DR form according to the Electoral Commission. However, residents in the area dispute the allegation.

Richard Mugarura, a voter and guide at the parking yard adjacent to the polling station recollects that results from the two stations were counted and captured on different DR forms.

"Unless otherwise but I was physically present throughout and observed that results were recorded on separate sheets - first to be recorded were results from B.M.K (A-N) on its sheet and then B.M.K (M-Z) on another sheet," said Mugarura.

Fredrick Muwaya Tibakuno, the Kampala regional returning officer, notes that they are still wondering how the results from the said stations went missing. Tibakuno says that the commission has since reported the matter to the police and also instituted internal investigations on the same.

He adds that several presiding officers who were in charge of the polling stations whose results were not returned are currently on the run.

"Initially, we thought that these polling stations had not come due to circumstances that were easily explainable. We only realized later that many of these presiding officers had in away been in a kind of connivance with specific politicians to withhold results of those polling stations. They never made it to us. Up to today we don’t have those results and so we have gone ahead to nullify yes, but also to take the necessary instructions to make sure that whoever is responsible for some of these actions is brought to book. Some of the cases are those where we did not have results and some are where we had more than the registered number of voters," Tibakuno said.

The law provides that if the DR form provided for is contentious or in case it is not brought within the sealed envelope, the returning office can reopen the black ballot box in presence of an officer at the rank of an inspector.

Although Tibakuno acknowledges the provision, he says it was not considered while transmitting the results. The returning officer adds that in his wisdom, he thought that if the presiding officer’s copy was missing, chances were high that even the one in the said box had a similar fate.

Richard Ssemanda, who coordinated the entire parish on behalf of the ruling National Resistance Movement, reveals that all declaration forms were collected and handed over to the responsible authorities after the vote counting.

However, the Mukono district returning officer, Mark Muganzi Mayanja, notes that DR forms and boxes of cancelled polling stations had been queried as they there was evidence that unidentified people had tampered with them.

“Results from areas of Kyampisi and Nama sub-counties were not considered after black boxes for both presidential and parliamentary candidates reached the tally centre with the seals broken. They were checked and thoroughly observed in the presence of police, candidates, agents and other election observers.” Muganzi notes.

In his own assessment, Tibakuno observes that it is most likely that candidates in the parliamentary race could have connived with the presiding officers to doctor or withhold results and in the process, they affected the presidential election as well.

In an earlier interview, Electoral Commission chairperson Justice Simon Byabakama Mugenyi denied accusations that there might be some foul play on the side of his Commission. He said even if they added all the votes from these areas to NUP presidential candidate Robert Kyagulanyi who has since petitioned court to nullify the results, they have no significance to the final results tally.

However, the proverbial 40 days countdown for thieves are ticking away for Gen Tibuhaburwa and his agent EC, Unjust Byabakama.
Quote | Report to administrator
+3 #2 kuku wazabanga 2021-02-17 16:21
I wonder why many people thought that the Musevenist EC could organize an election and declare another person as winner.

Where do expect the Ex Bandit to get the civility to allow another candidate to win and hand over power?

When he even told the world that he is cotter pin inserted with a hammer and must be removed with a hammer. Even in 2026 there will be an election and the results will be the same.
Quote | Report to administrator
+1 #3 Bwayo Geoffrey 2021-02-18 05:29
This is the worst organised EC ever in the history of Uganda
Quote | Report to administrator
Refresh comments list
RSS feed for comments to this post
Add comment