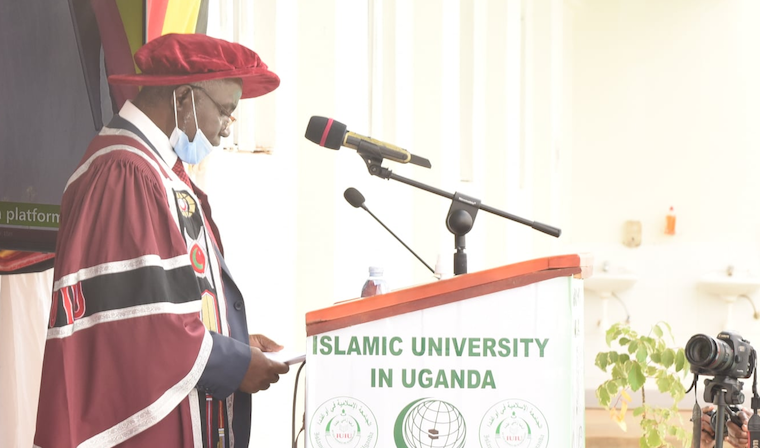 According to some students interviewed by The Observer at the weekend, the university has not been too eager to listen to their concerns raised since President Yoweri Museveni closed all schools in the country in March last year to slow the spread of coronavirus (Covid-19).

After the closure of schools, the ministry of Education and Sports, National Council for Higher Education (NCHE) advised schools to teach online but insisted no student should be left behind. But the IUIU students at Mbale claim the university online learning platform is more or less an ineffective database system that consistently has uptime issues.

Brava Owembabazi, a 3rd-year law student, claims the university lacks a clear structure of carrying out online teaching and learning. She says the ERP system offers no interaction between students and lecturers.

“There is no clear specific schedule, no defined platforms, no interaction. Some lecturers were sending notes via email, others on WhatsApp while others were using SMS. In my class between November and December (2020) only two lecturers out of 10 used Zoom. And because there was no schedule, most students missed. Those two lecturers would just call the student coordinators at say 11am and tell them that at 2pm we are having lectures. In a class of about 200 students, only 20 would end up attending,” she said.

According to Owembabazi, when they raised their concerns through the students’ guild, which wrote to the rector, the university didn’t listen.

“You know that is how IUIU is, no one in the administration is concerned and when you question them, they threaten to expel or deliberately fail you. I know there is going to be a reprimand but it is something I am ready for. On the other hand, if you don’t speak out you still suffer anyway,” she added.

According to her, when the Year Four Law students wrote their exams, all 60 students failed and when they applied for remarking, 20 students passed – something she attributes to the “ineffective” ERP system.

Interviewed for a comment, the university Public Relations Officer, Rehema Kantono said in the university setup, it not surprising that some students have complaints just about anything. She said there’s no problem with different lecturers using different platforms to reach out to students because they simply follow the government guidelines of leaving no one behind.

“Not all students are on WhatsApp at the time a lecturer posts teaching material, so they will go ahead and send an SMS to notify students that they are using various platforms. I really don’t see a problem with that,” she told The Observer.

Katono said she was not aware of 60 law students failing exams as alleged because she sits on the executive board where such matters are raised and this has never been raised. However, she said if it is true that students applied for remarking and 20 passed, “then it shows that we’re transparent.”

She further said it is impossible for a student to be deliberately failed at the university simply because he or she has raised grievances. She wondered where such a meeting would take place.

“Is it really possible in your view that a university can sit and all these bodies from the department to the executive council to decide to fail a particular student? So would they decide to fail the student in one course unit or all of them?”

A senior students’ guild body member said ERP is not ideal for E-learning and can be inaccessible to some types of phones, which students use since most of them don’t have computers. He said the students’ guild council wrote to the university raising the students’ concerns because majority were having access issues but nothing came of it.

In their meeting last Thursday, he said they were invited at 4.30pm but were made to stand outside until up to around 6pm.

“It was not even a meeting. We got the resolution already made. We were undermined. They just imposed everything on the students. At IUIU there is no flow of information, everything is concealed by the administration and sometimes as student leaders we’re as clueless about what the university intends to do like the rest of the students.”

Another 4th year law student said they overlooked the mishaps of the university e-learning portal initially since it was a new initiative for everybody. He said however, they were surprised to find the same mishaps in November when the semester resumed ahead of their exams yet they had lodged complaints.

“The ERP system actually was down most of the time, the systems administrator would always say give us a few minutes it will be back on shortly but it was more offline than online. We switched to Zoom but a lecture of 2 hours would only last for 10 minutes because lecturers would get frustrated that out of a class of 150 students only about five or seven were attending. The students said they did not have data to attend the Zoom meeting. We ended up coaching ourselves because we would pick notes from Kabojja and Kibuli campuses, which are better run,” he said.

He said the situation even got worse when students were recalled for one week to write exams and the university insisted on the zero balance tuition policy.

“We pleaded with the university to at least allow us to pay up to 70% because everyone was affected by Covid but they refused. In my then 3rd year law class less than 60% of students sat for exams with many applying for a dead year because they had no money. Much as this university was set on Islamic principles, it is run in a secular way. They care about money so much.”

Responding to the issue of zero balance, Katono said students forgot that by the time the university broke off, students had already been at campus for 13 out of the 17 weeks and because they have stayed at home for so long they think the university is trying to cheat them.

She said the university plans and budgets on a semester basis and therefore students can’t claim they did not utilize the services. Among the fees in contention is Shs 375,000 for accommodation, Shs 60,000 (medical fees0, Shs 396,000 (computer fees), Shs 60,000 (library fees) on top of the Shs 1.5 million average tuition.