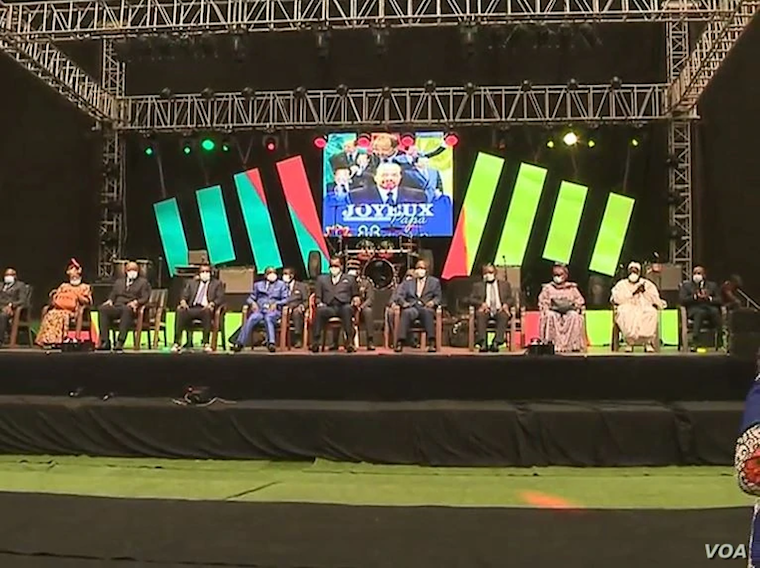 Paul Biya joined by government officials on his birthday party

Ceremonies were organized in Cameroon’s major towns, with loyal government ministers and young people pledging their support, while those opposed to his 50-year rule demanded the octogenarian hand over power. Biya is blamed by some for the several crises his country is facing but his supporters maintain that he is a godsent leader.

Thousands of youths at the Yaoundé Multipurpose Sports Complex sung an anniversary song wishing the 88-year-old long life and good health. The young people said they were invited for the anniversary celebration by Cameroon’s government.

Among them is 28-year-old Fatimatou Iyawa, president of the Cameroon National Youth Council. She said Biya works tirelessly to improve Cameroon.

Ernestine Mokake, 24, another member of the youth council, said she does not see any reason to celebrate Biya’s 88th birthday. She says it is unhealthy for a man at an advanced age to hang onto power.

"He has been too long in power. Since 1982, we have had just one president. Look at a country like America, from 1982 to 2021, they have had seven presidents. In my country for the sake of democracy, governance, accountability, peace and nation-building, I would have preferred that at least we have a second president. At least for a change." she said.

Biya took office in 1982 from Cameroon’s first president, Ahmadou Ahijo. Biya had served as prime minister since 1975. He has won all multiparty elections since 1992, and the opposition has always complained of heavy election rigging by Biya.

In 2008, Biya abolished the constitution's two-term limit. Main opposition parties such as the Social Democratic Front and the Cameroon Renaissance Movement party of Maurice Kamto, say Biya is responsible for the several crises in Cameroon. Kamto claims he won the 2018 presidential elections and Biya stole his victory.

Cameroon has for four years been fighting a separatist movement that has left more than 3,000 people dead in its English-speaking western regions. Boko Haram terrorism on its northern border with Nigeria has displaced more than 20,000 people. The spillover of violence in the neighbouring Central African Republic creates tension in eastern Cameroon.

The opposition blames Biya for ordering his military to fight disgruntled separatists instead of opening what they call a true dialogue to solve the crisis. They also say Biya uses excessive force, and his military targets civilians suspected of collaborating with Boko Haram.

Addressing Cameroon youths on February 10, ahead of the February 11 National Youth Day public holiday, Biya blamed some young people for the crises the country is facing.

Biya said he regrets that some Cameroonian young people have decided to rally behind the demons of hatred and division to the detriment of national unity. He said such youths are driven by barbaric fanaticism nurtured from foreign countries or by a pervasive use of social media to undermine Cameroon’s unity. He said he is urging young people to avoid such negative role models.

At 88, Biya is Africa’s oldest president. He is the second longest serving leader in Africa after his neighbour, Thedoro Obiang Nguema, of Equatorial Guinea. Obiang has been in power since 1979.

+7 #1 Lakwena 2021-02-15 12:50
In other words, like us Ugandans, the Cameroonians are suffering from the misfortune being led by a dinosaur (Dino) fossilized in their State House.

His subjects praising him are deadly opportunists just like us here in Uganda.
Quote | Report to administrator
0 #3 Falconer Mkokoten 2021-02-16 19:23
Even here the head of the junta is nearly 85 years. He only started counting his age when they arrived in Uganda from deep south.

In Cameroon they are far much better compared to Uganda. How can the army simply pick young boys to torture, those boys don't even know what's politics!!

But they were tortured bcoz they live in a specific region, period. Situation is now worse than Amin's.
Fellow countrymen it's time to push to get rid of...
Quote | Report to administrator
Refresh comments list
RSS feed for comments to this post
Add comment