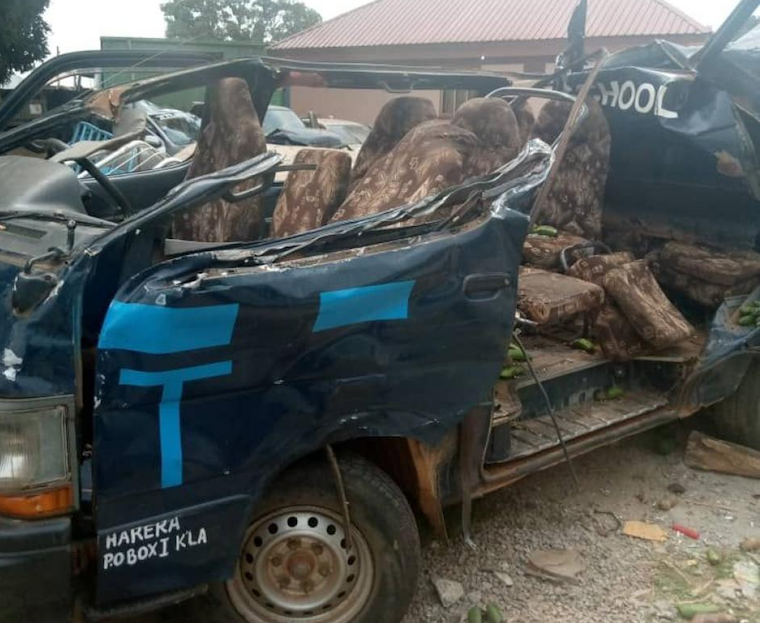 Wreckage of the taxi that was involved in the accident

Three people have died and 14 others injured in an accident along the Mityana-Mubende highway. The accident occurred on Friday at Kigalama village in Kassanda district.

According to the police, a speeding taxi number UBB 423R heading to Mubende from Kampala rammed into a Mercedes Benz trailer number, KBK 813S/ ZB9681 which had been parked on the side of the road.

The Wamala regional police spokesperson Rachael Kawala says that the trailer was under repair after it had developed a mechanical problem.

Kawala identified the dead as Fred Abomugisha, 45, a taxi driver, Andrew Serugendo a resident of Ndejje in Wakiso district and 40-year-old Fred Tumushabe.

The injured passengers who sustained injuries including broken limbs were rushed to Mityana hospital, some in critical condition. Kawala has attributed the accident to reckless driving and asked drivers to be cautious while on the road.

The Mityana-Mubende highway has a number of black spots and most accidents are blamed on speeding.

Okay, could his mean that the taxi was carrying 17 passengers or three people were in the trailer and 14 in the tax
Quote | Report to administrator
+1 #2 Wainanchi 2021-02-13 14:56
What I was writing and pleading before.? Deepest condolences and drive carefully please
Drivers do not kill!!!
Quote | Report to administrator
-2 #3 Wainanchi 2021-02-13 19:34
@ Wadda Rogers-- You are.coubting bodies and not crying for lost lives!

No wonder you are making those disgusting comments together with deviled lady Lakwena Who are you?
Quote | Report to administrator
+1 #4 Lysol 2021-02-13 19:51
Those cheap two-lane roads are death traps. The so called cheap(Chinese) infrastructure development of the corrupt regime is a big joke.
Quote | Report to administrator
0 #5 Dan 2021-02-13 20:56
Quoting Wainanchi:

What I was writing and pleading before.? Deepest condolences and drive carefully please
Drivers do not kill!!!

So these taxis do not comply to the Covid-19 SoPs of 8 persons per taxis.

That highway has lots of traffic officers, do they do checks or get paid by these errant drivers
Quote | Report to administrator
+1 #6 Wainanchi 2021-02-14 01:54
@ Dan..Thank you.!! This is our problem and I think Ministry of Interior and CDF of Police with Parliament Security MPs must introduce tougher sanctions for traffic police officers who need to be required with fast patrol cars and mobile radars to catch ,take off roads and punish law breaking and speeding drivers who are killing every day big number of innocent Ugandans New roads demand Bette supervision of traffic.

Even police helicopters linked with patrol cars could do the job.
Quote | Report to administrator
Refresh comments list
RSS feed for comments to this post
Add comment