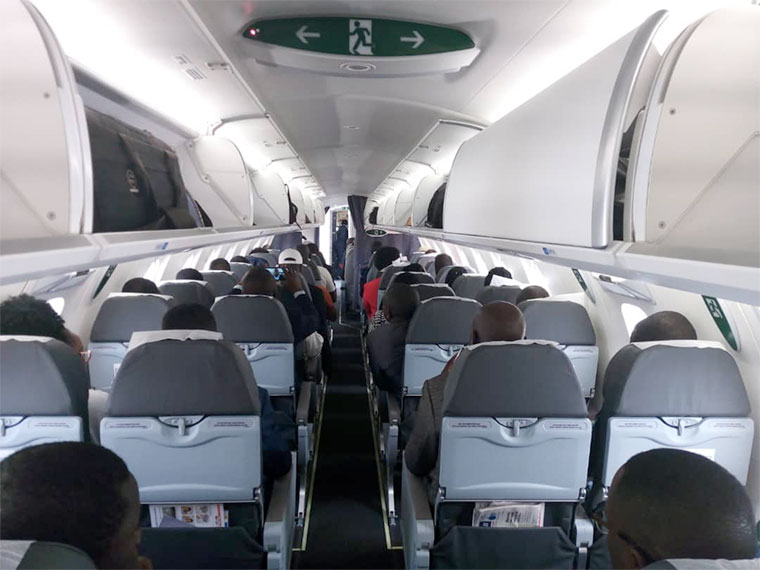 Uganda Airlines made revenue worth Shs 40 billion from the time it started operations to the end of December 2020. This is according to Cornwell Muleya, the chief executive officer, Uganda Airlines Company Limited.

According to Muleya,  the airline carried 77,355 passengers between August 2019 and June 2020, registering a shortfall of 10 per cent from its target of 85,760 passengers. This also meant that predicted income of Shs 31.5 billion was not attained, and instead, the airline generated Shs 25.2 billion. However, the airline made an additional Shs 14.8 billion from 26,394 passengers at the end of December 2020.

Muleya told the physical infrastructure committee of parliament on Thursday that the airline's commercial activities were suspended in March 2020 and they completed the period of up to June 2020 before reopening commercial flights as the Airspace was still closed.

“Before the effects of COVID-19 started in January 2020, there was a positive trend between passenger numbers, load factors,  and passenger revenues. COVID-19 effects had started worsening the performance trends before airspace closure came into effect,” Muleya said.

He, however, added that the company re-launched its commercial operations in October 2020. He says that the airline which initially operated four Bombardier CRJ 900 aircraft carrying 76 passengers each, had projected to have opened all 18 regional destinations by the end of December 2020, assuming flights start in August.

However having started operations in October, the airline only managed to operate in nine destinations including a new one to Kinshasa in the Democratic Republic of Congo.

The other destinations are Bujumbura, Burundi, Nairobi and Mombasa in Kenya, Mogadishu in Somalia, Juba in South Sudan, Dar es Salaam, Zanzibar and Arusha in Tanzania. The airline plans to start long haul routes to Guangzhou in China, London in the UK, Mumbai in India and Dubai in the United Arabs Emirates by March 2021.

But the airline has also accumulated some funding arrears of Shs 89.5 billion for foreign exchange variations of Shs 3 billion, capitalization funds shortfalls of Shs 0.90 billion and Shs 85.63 billion funds for the Uganda Civil Aviation Authority incentives.

The airline has in recent weeks received two Airbus planes with the capacity to carry 258 passengers each.

0 #1 kabayekka 2021-02-12 16:13
Well then if it is a national airline company, ground handling charges, parking and so on should be pronounced to the physical infrastructure committee.

It is for the public good if all the infrastructure of this international company is put down on the table for the citizens of this country to examine in details.

That is what should be done with much of the national enterprises that have not yet been sold off to private ownership by this long serving government!
Quote | Report to administrator
0 #2 rubangakene 2021-02-12 17:28
It's the pandemic that is hurting the airline industry at the present moment all over the world.

You could still make money if you convert one Airbus to ferry cargo; that's where the money is, instead of relying on 'joyriders'. Most businesses are now transacted through technology. Good luck, early days!
Quote | Report to administrator
+3 #3 James Mukwaya 2021-02-12 19:00
There couldn't have been a worse time to start/revive an airline.

It's the pandemic that is hurting the airline industry at the present moment all over the world.

You could still make money if you convert one Airbus to ferry cargo; that's where the money is, instead of relying on 'joyriders'. Most businesses are now transacted through technology. Good luck, early days!

That;s true but they had already purchased the plane as brand new so splashing another round of money to convert into freighter may not make sense.

Soon they will need to go for maintenance to clear the "cobwebs" gathered.
Quote | Report to administrator
Refresh comments list
RSS feed for comments to this post
Add comment