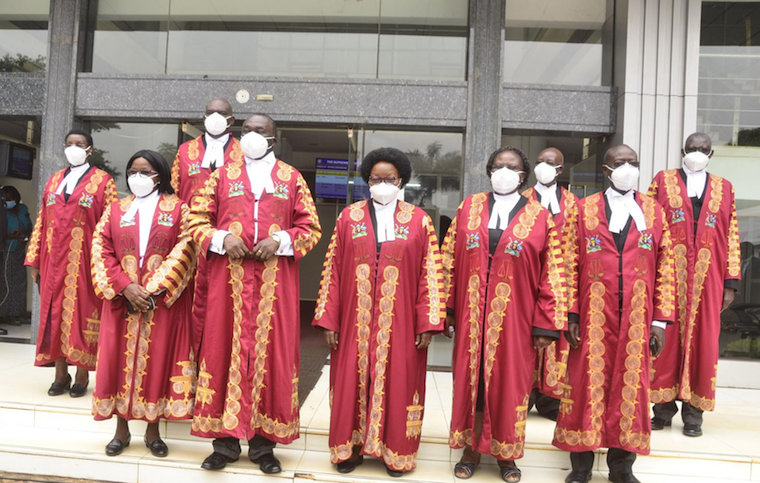 The Supreme court has set March 18, 2021, as the date, it will deliver its summarised ruling on the election petition filed by National Unity Platform president, Robert Kyagulanyi Ssentamu which seeks to annul the victory of President Yoweri Museveni.

Kyagulanyi ran to the Supreme court, saying the January 14 general elections were marred by irregularities such as voter bribery, intimidation, arrests and violence that resulted in the death of his supporters. The matter came up for conferencing on today Thursday to allow the parties including the petitioner, Museveni, the Electoral Commission and Attorney General to agree on the issues they want the nine-member panel of the justices to determine.

As a result, Sseggona asked for an adjournment, saying that they were unable to meet to frame the issues before they present them to the justices. He also informed that court that he wanted to file an application for discovery of key documents in the possession of the Electoral Commission, which are critical in determining the case. Sseggona told court that they have already written to the Commission and are yet to receive a response.

In his ruling, the chief justice Alfonse Owiny-Dollo noted that a presidential election petition must be determined expeditiously within the required time frame as provided for in the constitution to avoid a crisis.

He explained that once the pre-hearing conference is done, the court will proceed by way of written submissions, which he described as the major components of the hearing. He, therefore, gave the petitioner up to February 27 to file his written submissions to allow the respondents to respond by March 2. He also said the petitioner will respond to any arising issues by March 4.

The parties will have between February 25 and 26 to cross-examine witnesses and tender whatever electronic evidence will be available including videos. According to the justices, on March 5, the parties will appear physically to make oral submissions within 30 minutes each specifically highlighting the reasons why the case should be determined in their favour. Rejoinders will run for 20 minutes.

Owiny-Dollo warned the parties against bringing voluminous records, saying they should only present the material that they think is fit and necessary for the case. The justices will retire from March 7 to go and write their summarized judgment.

The chief justice, who warned social media users and the public against doubting their impartiality, said the Supreme court registry will be open even on weekends for purposes of the presidential election petition.

He has directed the Commission to provide all the necessary documents to Kyagulanyi's lawyers, arguing that there is no reason as to why the petitioner should file for an application for discovery. This is the fourth time Museveni's election victory has been challenged in court.

The courts have previously confirmed electoral malpractice and rigging by the Museveni camp but said it wasn't enough to affect the final outcome of the polls.

This time, Owiny-Dollo said they may not necessarily look at the numbers but the quality of the evidence submitted. In a previous interview with NTV, Owiny-Dollo said even with just one ounce of electoral crime, the court can overturn the election.

On the African continent, only Kenyan and Malawian judges have ordered for fresh elections after questioning the quality of the elections.