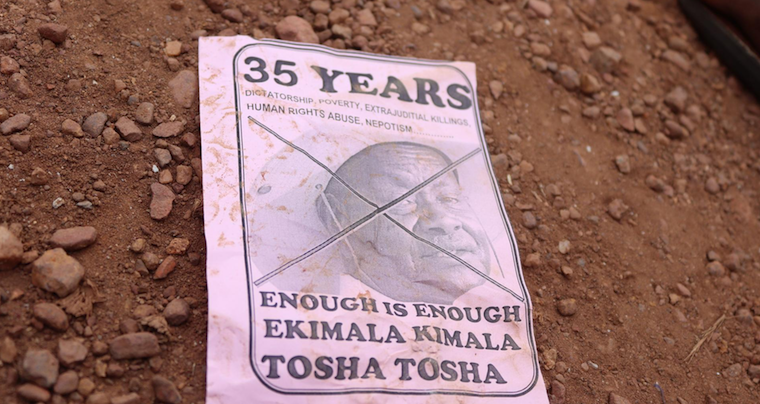 A copy of anti-Museveni leaflets

The leaflets were dropped in Kabale town in Kigongi along Kabale-Mbarara highway, Kabale taxi park, along Coryndon road and Keita road in the Central division, Mukinyabwooya in Northern division and Kirigime in Southern division, Kabale municipality.

The leaflets first appeared on the streets on Tuesday morning and were picked up by security as exhibits. But even more leaflets were dropped on Wednesday night. The leaflets carry a crossed-out portrait of Museveni and messages branding him as a dictator and promoter of poverty, nepotism, extrajudicial killings and human rights abuses.

They also carry a message declaring that “Enough is enough”, which is also translated in Luganda and Swahili. The leaflets also call on the people of Kabale to stop sending food and starve the people in the central region who they say are keen on keeping Museveni in power.

Salim Hamis, the Kirigime Ward National Resistance Movement (NRM) chairperson in Southern Division in Kabale the municipality in unhappy with the leaflets, saying elections concluded, and Museveni has been duly elected for another term in office.

He says that the leaflets condemning Museveni’s rule are unnecessary since he was voted by the majority of Ugandans in the just concluded presidential elections.

Maurice Mugenga Keitaba, the Kabale district NRM returning officer, says the leaflets are uncalled for because they are aimed at inciting hatred against Museveni who was voted by the majority. Keitaba says there is need for NRM leaders in the district to work with security to identify those behind the leaflets.

Brian Ampeire, the Kabale district police commander, says they have commenced investigations to find those behind the leaflets and their motives. He, however, says that they suspect that the leaflets could be the handiwork of opposition politicians who lost in the recent elections.

The leaflets come a week after police arrested two people accused of circulating similar leaflets in Masaka and neighbouring district.

Kyagulanyi refuted the results and petitioned the Supreme court accusing Museveni of vote-rigging.

Only elections can change leadership and why change when 80% of Ugandans want to lead them Yoweri Kaguta Museveni examplary son of Uganda and Father of Ugabda! Who has the problem?

Normal and decent people do not!! Only bayaye have but they will be defeated.Neera neera neera Mzee YKM,paka last,paka paka.Uganda loves you and Wainanci and Mama Mia in the forefront !!!!
Quote | Report to administrator
+5 #4 A K Mukasa 2021-02-11 23:18
Everything said in the leaflets is already in the public domain and I have heard opposition leaders and those opposed to the regime utter the same on radio and tv and repeated in the media.

So I don’t understand what the fuss is all about and whether it is only an offence if repeated in leaflets that are anonymously distributed.

When did information become prohibited for simply being disseminated in a different format? This is simply bullying and an attempt to criminalise any kind of dissent.
Quote | Report to administrator
+4 #5 Lakwena 2021-02-12 12:15
In other words, the leaflet hereabove with our "Problem of Africa", Ndiwulira Gen Tibuhaburwa's portrait crossed out and on a pile of fresh murram, denotes he is dead and buried in a fresh grave. Eish!

Before the eadly 2021 General Election I remember reminding Janet Kataha to start packing Gen Tibuhaburwa suitcase and drag him out of our State House and take him to Rwakitura, but she didn't listen.

But now see what some people in Kabale are thinking and wishing for him? Death, yet this is one of the region in the far South West, where apparently he got a landslide victory.
Quote | Report to administrator
-3 #6 Wainanchi 2021-02-12 18:36
@ Losers Ahoy.!!!!!!

You losers and dumbsters just waste space of this widely read Uganda newspapers and make people, I mean normal people,wonder what has been going with Lakwena,Akiot,KabbakaYeka, and a dozen of others ,but only limited to this group of notorious dumbsters and fools ,who polute space of this s newspaper by stubbornly writing day by day same old mantra and ideas which have no serious basis,but only trump politics and propaganda of hatred.

Uganda is democracy and it has nots t been censoring these characters but left it to broader public to draw conclusions.

Therefore,whenever I see names of these losers Ibtick them minuses to make sure that they are out of normal readers horizons

That's NUP fraudsters and the mischievous Paul Runyindo. The two illiterates will be defeated. Magasia kabisa!!!

They can write complains in send or piss in the Lake Victoria.,or keep writing desperate comments in newspapers like Observer, Bukkede etc Hagahs
Quote | Report to administrator
0 #10 Lakwena 2021-02-15 12:01
Quoting Wainanchi: