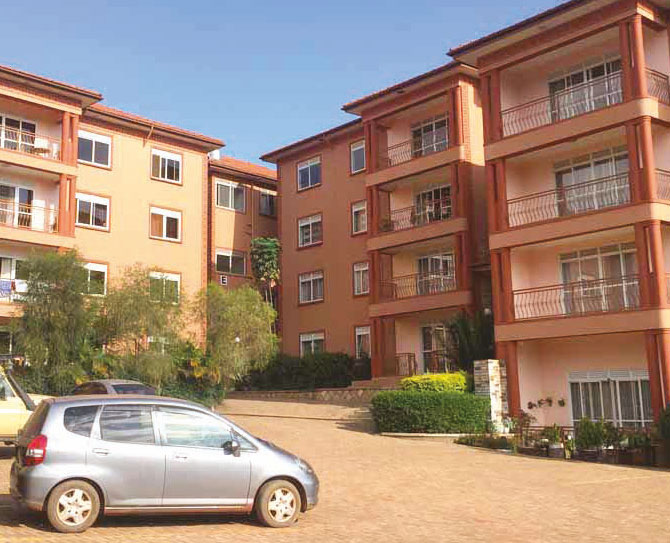 The middle-class housing estate is booming

About 8.3 million Ugandans (22% of the population) are in the more rarefied world of middle-class.

This excludes, the floating middle-class (FMC), those susceptible to becoming poor in case of negative economic shocks. But can this middle-class deliver national aspirations of attaining middle-income status by 2040 as we advance into the third National Development Plan period (2020-2025).

The brief breaks down the middle-class into three categories. First is the Floating Middle-Class (FMC), these are between the poor and the lower-middle-class.

“This class is vulnerable and highly unstable and can quickly descend into poverty in the event of economic and other shocks. The per capita consumption level for FMC is $2-$4 (Shs 7,300 – Shs 14,600) per day - just above the developing world’s poverty threshold of $2 (Shs 7,300) per day.”

This class lives above the subsistence level and can save and consume non-essential goods. The third segment is the Upper Middle-Class (UMC). This has households whose characteristics are closer to affluent households.

The FMC alone represents 34.8 % of the total population in Uganda. According to statistics from the Uganda National Household Survey (UNHS) 2016/2017, out of the 21.3 million Ugandans in the middle-class, the share of the Floating Class, Lower Middle Class and Upper Middle Class is 61 per cent, 33 per cent and 6 per cent respectively, which means the floating class – is the weakest middle-class category with characteristics closer to the poor.

It constitutes the highest share of the middle-class in Uganda. The EPRC brief notes that the floating class is highly vulnerable
or susceptible to any economic shock, and can quickly descend into poverty. It is an unstable sub-group of the middle-class that cannot be relied upon to attain and sustain the middle-income status, as well as economic growth and development.

Unlike the floating middle class, it is the upper-middle class (which is just six per cent of the middle-class), that is the source
of substantial economic power for the country, capable of providing a stable ground for sustained growth and middle-income status.

“This evidence suggests that the quality of Uganda’s middle-class is wanting. It is fragile and highly unstable as it is susceptible to risks and shocks,” the brief says.

Urbanization is expected to drive the middle-class because of the opportunities it presents such as more paying jobs and increase in consumption because the urban class is willing to pay for more premium products.

Smaller households were also found to be vital for a sustainable middle-class since they create opportunities for growth in the middle-class. From the results, EPRC observed that when the household size is too large, the variable reduces possibilities of attaining as well as retaining upper and lower middle-class status.

Education is another fundamental tool the EPRC brief fingered for boosting the middle- class because the movement from lower to higher levels of education increases the probability of becoming middle-class by one to 34 percentage points depending on the middle-class category.

A significant positive change in educational attainment up to post-secondary level (university or tertiary education) is associated with doubling the likelihood of transitioning into the middle-class with an increase of nine to 35 percentage points.

Investing in higher educational achievement is significant for attaining higher economic status, such as the upper-middle class. Household economic activities or income-generating activities that households engage in also play an essential role in the middle-class transition.

The key economic undertakings include; commercialized agriculture and economic diversification into non-agricultural enterprises, including property income. The EPRC brief, therefore, gave a policy recommendation that in order to achieve and maintain the middle-income status, it is crucial to build a stable middle- class in the country.

Policy should target breaking the fragility of the middle class and achieving a more resilient one, by focusing on the transition of those in the floating category to lower and upper middle-class categories. Thus, investing in the drivers of middle-class change such as organized urbanization, having smaller manageable household sizes, economic activities including diversification and entrepreneurial development and quality education as a tool for human capital development is vital.

In July 2020, the World Bank declared Tanzania as a lower middle-income country five years ahead of her schedule having attained the Gross National Income (GNI), the total income earned by the country, of $ 1,080 (Shs 3.9 m) while that of Uganda is still at $780 (Shs 2.8m).

For a country to achieve the lower middle-income status, it must have a GNI, which is above $1,036 (Shs 3.7m). Uganda envisions becoming an upper middle-income country by 2040. To achieve this, according to the brief, medium-term targets are set, guided by five-year National Development Plans (NDP).

One key medium-term target was attaining a lower middle-income status with a per capita income of $1,039 by 2020. Implementation of NDPII was expected to deliver on this aspiration, but the government failed to achieve this.

As a strategy, and as we advance into the NDP III period (2020/21 – 2024/25), the government can leverage on the power of the middle-class to drive the country into the middle-income status.

For this to happen, according to the brief, there should be a sound and sustainable middle- class, given that a strong middle class is critical for achieving and sustaining the middle-income status.

Someone help clarify ??? A friend of mine was claiming that those are sexed up figures!!!
Report to administrator
+9 #2 Rwatooro 2021-02-10 06:45
Whoever published this article is an enemy of the people of Uganda who is suffering being tortured in safe houses, in army torture chambers, and underground bankers.

People on the streets who are looking for what to feed on, mothers whose kids are brutalized in the so-called drones, would not feel happy to read such an article.

The so so-called middle-income class is those who are trading in human organs and first family. Money that would be educating the youth and training them on practical jobs around the country is being swindled by the first family in Statehouse.

This is the time to drive the dictator out of Uganda, People are being tortured every day and you are telling us about the middle-income class. ****You must have been bribed to publish such an article**** Shame on you!
Report to administrator
+2 #3 Lakwena 2021-02-10 17:21
Unless Middle Class means something else: for Heaven's sake, a middle classer, does not rent or live in matchbox apartments.

I need a break from Gen Tibuhaburwa's sycophantic, obscurantist propagandists.

In other words, terrified of the 87% very poor and unemployed youth; this is Jjingo's jingoism, how the successful wrongdoers, superintended by our Problem of Africa, Author and Master of Violence qualify and quantify a phony and temporary so call middle class in Uganda.

Otherwise, Uganda has become the Classical Platonic and Dickens Tail of Two Cities in one; where the few very rich (armed with Drones) and the very many poor, viciously plot against each other.
Report to administrator
+1 #4 Lysol 2021-02-10 19:54
The Observer, do you mean lower middle class? Not even close.
Report to administrator
+2 #5 Wainanchi 2021-02-11 17:38
And guys please jug my memory!!

Do it,do it.Itbwas not long ago only when NRM N R A and legendary combatant General Yoweri Kaguta Museveni led the liberation struggle and took the reigns of Uganda, Uganda started upword trend.

For uninformed folks,from all corners of the world,listen carefully and get this truthful and easily verified information.

Uganda was healing wounds from the civil war and was all in tatters and misery.

If you wish say ribs or front leg of pig ,they would chop it for you throw on scales and drop in your shopping bag.

Others were mostly walking and only lucky ones would ride bikes with talapua fish hanging or bunch of matoke on the back of the biker.
Report to administrator
+2 #6 Wainanchi 2021-02-11 17:48
And this is not all. All over the place misery ,people suffering.

Kampala streets were impassable ,with potholes everywhere,mud and remaining rain ponds splashing drivers all over the place.

People poorly dressed were slowly walking along Kampala roads since they could not afford rare matatus.

Boda bodas were non existent but in the evenkngs small bars and bamuchomo placed were in abundance and tired office workers used to drop by and have a bottle of Port Bell beer or if available Kenyan beers.Tonto and Varagi were widely available and Aids was just looking killing huge never of innocent Ugandans Area of Rakai was notorious place taking huge number of lives

This legendary commander and leader was fighting to save lives educating masses to stay safe and not risk dear lives And today.?? Uganda is hugely different thanks to whom.Jog your memories,scratch your empty heads you all haters of Uganda and leave us at peace !!
Report to administrator
+3 #7 Wainanchi 2021-02-12 00:42
And today? Who is lying and saying that Uganda is poor and backwarded and does not have middle class of almost nine millions of souls out of forty five millions.

Just stroll over capital Kampala and major Uganda cities breaming with high rise buildings ,huge number of banks and modern buildings.Wise people say if goat is lying the horns do not!
Report to administrator