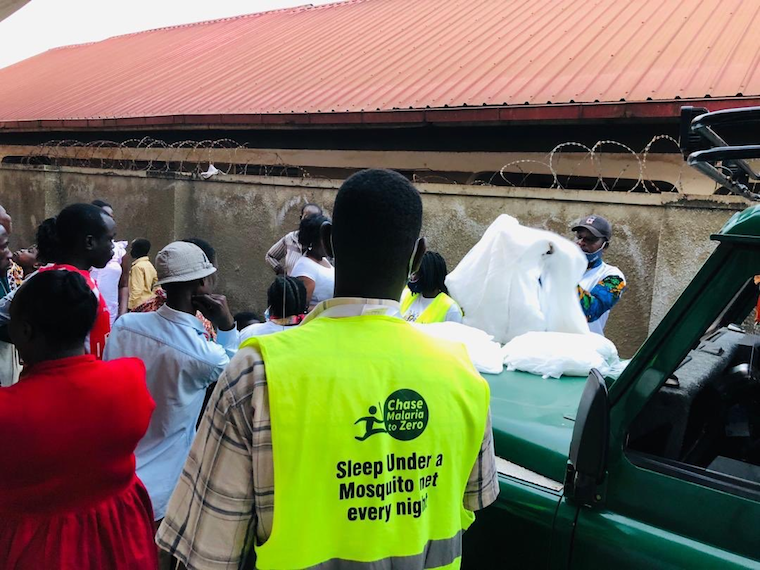 Four people have been arrested after they were found in possession of 2,100 government mosquito nets.

The suspects have been identified as Israel Musaazi, Christopher Habomugisha, Baker Musoke and Richard Ndigizimana. They were intercepted along Kira road two days ago by the 999 patrol team that became suspicious of a vehicle moving in curfew hours.

Police say the group was tasked them to explain how they had acquired the nets and where they were taking them in wee hours but they had no answers prompting their arrest.

“We know these are mosquito nets supposed to be given out to citizens at no cost. These people had no document and could ably not explain how they got them. We arrested them for having government stores,” Owoyesigyire said.

Musaazi, in his statement at Kampala central police station (CPS), said he was going to sell the mosquitoes because he had got them from an official working with the Ministry of Health. He adds that he does not know the name of the official who gave him the nets.

“I called an official from the ministry of Health to give some nets to distribute to people in Kifumbira. I wanted 13 bundles but I was given 30. I thought the rest were for selling since the distribution exercise had ended,” Musaazi states in his statement.

The government distributed free mosquito nets in Kampala city suburbs between January 11 and 12 this year. This was just two days to presidential and parliamentary elections.

Owoyesigyire said police wonders why Musaazi did not distribute the nets to citizens or take them back after the exercise had ended. Musoke in his statement said he was just hired to transport the mosquito nets and does not know where and how Musaazi got them.

“I am a driver and my work was to drive these people and their mosquito nets. I don’t know whether they were stolen or not.”

Ndigizimana also disassociated himself mosquito theft claiming he was approached by Musaazi who he refers to as chairman to sell the nets. Ndigizimana insists in his statement that he was only going to get a commission on every net sold and it was going to be a good deal for him.

It is sad but i think they have learnt from the best, Government officials who stole money from the global fund that was intended for purchase of medicine for TB and malaria, many have since built empires while the beneficiaries have died.

I now know why Jesus will never come back as he may never find any sinless person to take with him, not even me
Quote | Report to administrator
0 #2 WADADA rogers 2021-02-09 21:06
Fortunately, the names speak for themselves and please observer, get the spellings of their names right, the first one is Israel Mus(h)aazi, the second Christopher Habomugisha, the third is Baker Mus(h)oke and and the forth is yours truly Richard Ndigizimana. Katuna here we come again
Quote | Report to administrator
Refresh comments list
RSS feed for comments to this post
Add comment