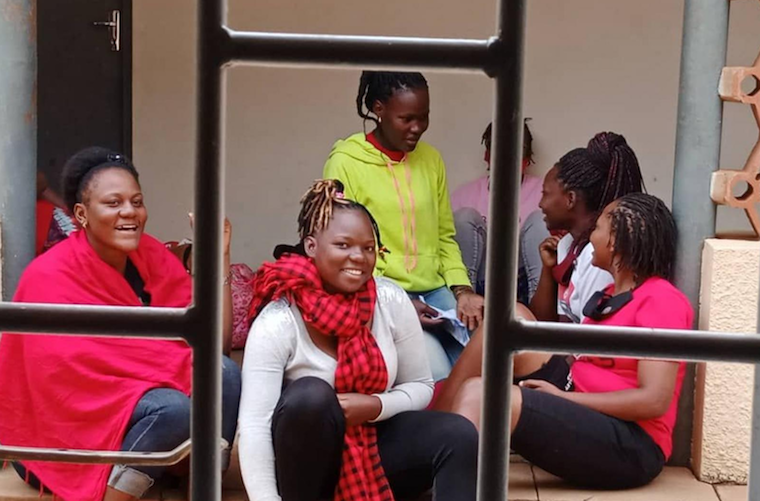 Some of the NUP who were released on bail

The General Court Martial in Makindye has granted bail to 13 supporters of National Unity Platform (NUP) who were arrested last year from the island district of Kalangala.

The group currently facing charges of illegal possession of ammunition has been released by a seven-member panel led by Lt. Gen. Andrew Gutti.

They have been ordered not to go beyond Kampala and Wakiso districts without the permission from the Court Martial registrar. They have also been told to report to court after every two weeks.

The decision to give the 13 bail followed an application by their lawyers led by George Musisi and Anthony Wameli. These told court that the offences against their clients are bailable and that they were tortured during custody. Court also heard that they had substantial sureties.

With the exception of Kyumakyayesu who had medical letters from St Francis Nsambya hospital requiring him to undergo an operation, none presented unique grounds.

The court opposed the bail application for the 36 relying on the affidavit of detective assistant inspector of police Peter Wetaaka who is attached to the Criminal Investigations Department (CID) of police in Kibuli. Wetaaka says that he is one of the investigators that participated in the case against the accused persons and none of them was tortured as they alleged in their bail application.

He adds that by the time they were arrested, they were inciting violent protests and were of violent conduct towards police officers. Because of this, Wetaaka says that they are most likely to continue with the same actions and therefore they should not be granted bail. However, in his ruling, Lt. Gen. Gutti said he was to decide on the application for the rest on February 15.

The prosecution alleges that the accused persons and others still at large on January 3, 2021 while at Makerere Kavule, Kigundu Zone, Kawempe Division were in possession of four rounds of ammunition of an AK-47 gun and the said ammunition was a monopoly of the Defense forces.

They were first arrested on December 30, 2020, from Kalangala district during the campaigns of NUP presidential candidate Kyagulanyi. The accused persons were then taken to Masaka Chief Magistrate's court presided over by Charles Yeteise who charged them with inciting violence and doing acts that were most likely to spread the infectious disease.

2- Imagine mature people, well educated behaving like maroons just to please ONE man ! ,you lie, you mistreat, you brutalise,!

3- Muesveni &co are so greedy, so insensitive, shameless, callous, parochial, and so primitive !
Uganda is cursed !
Report to administrator
+9 #3 Sula 2021-02-09 08:55
4- Is there anybody sensible and sane still left in the NRA/NRM/Government ?.Is this not a shame ?
- infront of our young people ? our children ?in primary 5, senior /high school/tertiary ?
- infront of sane countries like Kenya,South Africa,Botswana etc ?
Didn't museveni come to destroy this country ?

5-While other countries are busy building their economies , : we are busy in stupid courts over flimsy ,petty issues !, paying 40 lawyers ? buying tons of tear gas,bullets,mambas etc ! singing shallow and empty slogans.-- S.....Ho.....
Report to administrator
+3 #4 WADADA rogers 2021-02-09 10:51
These are innocent Ugandans being victimised, is it a crime to support a candidate of one;s choice.
Report to administrator
+1 #5 Klalibbala 2021-02-09 21:50
Yes #Sula..FAILED STATE REVISITED! They were refused Bail for presumably owning a magazine with Seven Bullets!

No evidence of Finger prints or the Exhibit itself !They used to abuse Former Regimes of Al Hajji and Obote as Swine and Rudimentary !

Today 35 Years later!With 5 Dams Generating Electricity Kampala is in Darkness! Sewage of 1900 is still Flowing around Town causing a Stench plus People Burning Buveera every evening Polluting the Atmosphere!!

That is what They Call Securing the Future! Kenya and Rwanda are Skyrocketing to The Moon Building Smart Cities! S G Railways and Tarmac everywhere! No Wonder The Despot Calls Himself "The Curse and Kisiraani Who hates Humanity..
Report to administrator
+2 #6 Kalemera 2021-02-09 21:54
These idiots arrested girls? Girls? Girls!!!!
Report to administrator