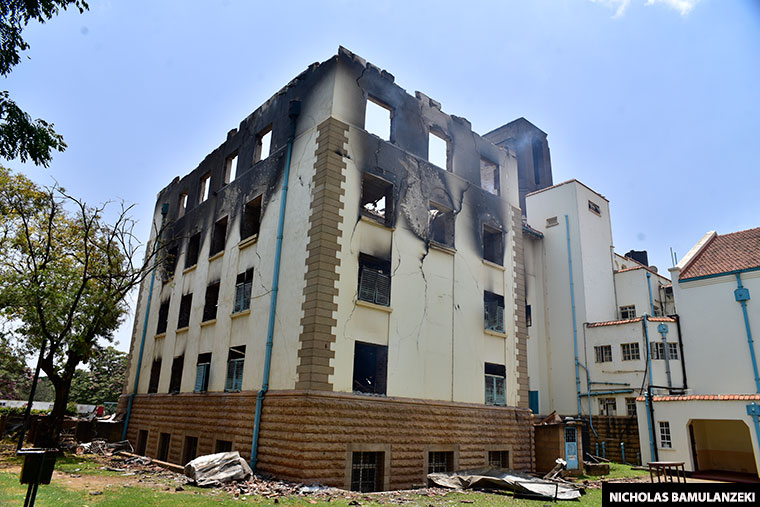 Investigations into the fire that gutted Makerere University's iconic 76-year-old Main building has ruled out a possibility of arson.

The building, also known as, the Ivory Tower caught fire in the wee hours of September 20, 2020, destroying the historical building valued at Shs 15 billion and several vital records and documents spanning decades that were kept in different offices hosted at the building.

But a report from investigations that were carried out by the Criminal Investigations Directorate (CID) and the ministry of Works instead points to electricity as the likely cause of the fire.

In a recent communication to staff, the Makerere University vice-chancellor Prof Barnabas Nawangwe has also highlighted snapshots of the report and shared several recommendations provided.

The recommendations, according to Nawagwe, include an overhaul of the electrical systems in the university buildings, provision of a fire hydrant on campus, recruitment of electrical experts, and a total reconstruction of the building, among others.

More clues on the report can be traced in the January 25 cabinet memo which indicated that the cabinet had discussed and taken note about the recommendations on the investigations into the fire.

Previous minor fire outbreaks on the same building were also blamed to electricity-related problems. For instance, In 2018, a fire broke out in the central registry, although it was put out before it caused any damage. The cause was later attached to old electrical wiring that was eaten by a rat thus causing a short circuit.

That should be the starting point.
Quote | Report to administrator
+3 #2 WADADA rogers 2021-02-08 11:43
God have mercy on this country where corruption rules every decision. I hear police report, so sad, what did we expect from Uganda Police, a report that exonerates those who bribed them, After all, they do not even have the expertise to investigate such a high profile case, i mean why didnt we consider engaging the services of an independent commission of inquiry partly comprised of some foreign experts.

The reports by these incompetent fellows should never be taken serious so to say the least.
Quote | Report to administrator
+3 #3 Kalibbala 2021-02-08 19:34
Crack smoking Army men in Police Uniform investigating !! hahahaaaa..These Same Clowns Disbanded Special Branch Which was in Position to Investigate such Cases of Arson or Wanton State Murders that have taken place recently..

Call it A FAILED STATE..Makerere was Burnt by the Arson Squad Commanded by Kale Kayihura! Like Park Yard of Nakivubo and All other Fires!! They intended to Burn Electoral Commission but the Arsonist took away with the Money!..
Quote | Report to administrator
Refresh comments list
RSS feed for comments to this post
Add comment