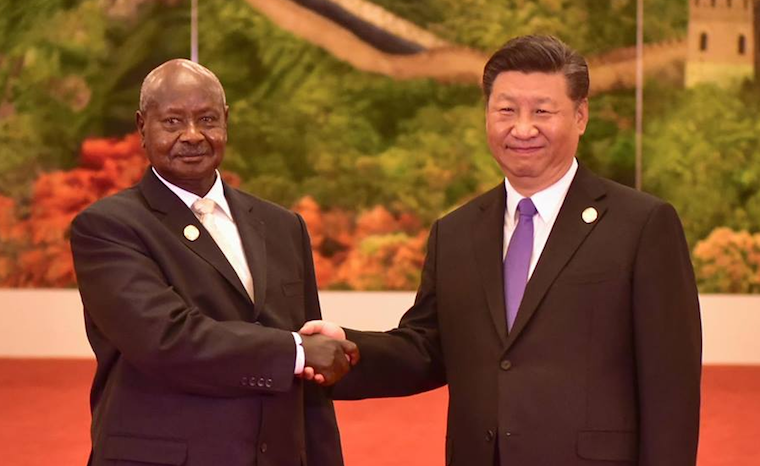 People’s Republic of China President Xi Jinping has congratulated Yoweri Kaguta Museveni for having been elected for the sixth term in the row.

According to a press statement released by the presidential press press unit (PPU), President Xi said that Museveni’s re-election means that Uganda will continue to make even greater achievements in materializing her vision on national development.

“It is with great pleasure to learn that you have been re-elected as President of the Republic of Uganda," said the Chinese leader.

"On behalf of the Chinese government and the Chinese people and in my own name, I wish to extend our sincere congratulations and best wishes to you. I believe that under your leadership, Uganda will continue to make even greater achievements in materializing her vision on national development.”

Unlike several election observers and Western countries like United States and the United Kingdom that expressed concern in the way Museveni procured his sixth elective term, China and Russia have congratulated Museveni without mentioning the violence and bloodshed that characterized the electoral process.

Museveni was announced winner by the Electoral Commission after beating 10 rivals to get 58 per cent of the valid votes cast.

“We have all along enjoyed mutual support and trust and plenty of cooperation. Since the outbreak of COVID-19 pandemic, the two countries have been tiding over the difficulty together, supporting each other, thus composing a chapter of fighting the pandemic in friendship and solidarity. I attach great importance to developing China-Uganda relations and wish to work with you to promote China-Uganda comprehensive cooperation partnership for new achievements so as to better our two countries and peoples.”

Meanwhile, the United Bank for Africa directors Joseph Balikuddembe and Chioma Mang also congratulated Museveni upon his victory and pledged to support government’s efforts in the creation of social-economic transformation.

“We recognize the importance of a strong collaboration with the private sector in achieving your various economic objectives towards the creation of socio-economic transformation in Uganda...United Bank of Africa is committed to supporting government in her development efforts and improvement of life for the people of Uganda."

Similarly, the board chairperson of the Presidential CEO Forum Ms Barbara Mulwana said the extension of Museveni’s mandate as president of Uganda and the NRM party whose members were overwhelmingly voted into the next parliament by the people of Uganda is a vote of confidence in the ideals espoused by Museveni and the party.

“As a business leader, I am confident that we shall continue to enjoy peace and stability and a conducive business environment geared at facilitating investment in the country and that we shall be able to build on the tremendous progress achieved over the last five years,” Mulwana said.

The honorary consul general of the Republic of Serbia Jovan Latincic prayed for God's blessings on Museveni government and the people of Uganda.

“We appreciate your contribution to the traditional good relations between our two countries and do hope it will be extended to the fields of politics, defence, economy, science, education and others for the mutual benefit of our two great nations,” Latincic said.

Other messages came from the secretary general of the Union of Muslim Councils for East Central and Southern Africa Sheikh Haroun Rashid Kasangaki who said Museveni’s victory is a great testimony that the majority of Ugandans deeply cherish and support his pragmatic and developmental leadership.

“Your dynamic and conducive leadership has greatly steered the country in achieving tangible growth as well as promoting democratic governance," Kasangaki said.

"The Union of Muslim Councils is highly indebted to your individual efforts and those of government that have transformed our dear country and created sustainable peace, harmony, development and freedom in Uganda in addition to promoting the integration of East Africa and Africa.”

The joint managing director of Madhvani Group Mayur M Madhvani pledged the groups cooperation in participating in the economic growth and development of the country.

“The next five years will indeed be challenging and we as a group pledge our cooperation in participating in the economic growth and development of the country and particularly look forward to the improvement of the cross border trade with our neighbours, the successful commissioning of Amuru Sugar Works in partnership with the government as well as the introduction of an ethanol blending policy," Madhvani said.

The salutations come at the time when Museveni has yet again been dragged to the Supreme court over alleged election malpractice and rigging. The Supreme court is set to start looking into the election petition filed by National Unity Platform presidential candidate Robert Kyagulanyi aka Bobi Wine next week. Museveni's last 3 of the 5 victories were declared as fradulent by the court which however claimed the fraud was not enough to overturn the final result outcome.

Thank you for being such good friends and cone to aid of Uganda when many others were turning their backs and attacking Uganda!

Your contributions can be seen everywhere not only in Uganda but in many other developing countries
For those and your compassionate assistance we love you Xinhua,New China.Sie sir!!!
Quote | Report to administrator
+3 #2 Lysol 2021-02-06 19:50
Globalists are the one who can determine elections all over the world these days; in order to control the resources and economies of this world just to enrich themselves, Poor people always pay the price.
Quote | Report to administrator
-2 #3 Wainanchi 2021-02-07 14:58
Long live Chairman Xi Ji Ping!! Long live Great People of China!

Long live friendship between Uganda and People,s Republic of China.Thank you China!!!
Quote | Report to administrator
+1 #4 Akao 2021-02-07 18:08
They are both useless dictators who live at the expense of thwit citizens.

At least the Chinese one is a little bit smarter. He is taking resources all over Africa and sending his surplus population to get work in Africa where they are treated as kings, while Ugandan dictator is sending his citizens to be slaves in Arab world.
Quote | Report to administrator
+2 #5 Kalibbala 2021-02-07 21:59
Only Psychopaths are ready to clap their Hands by hearing China buying them Out!!

Already Uganda was mortgaged to China for 49 Years! Kisiraani,The Curse and Enemy of Humanity will Long be Dead when Our Grand Children are Held in Slavery to Pay Back the Debts that Have been Squandered by The Likes of the Doomed Family!

But Uganda is Plunged in Darkness!! Kigali and Nairobi are Shining Cities!

Sewage is Still Floating in Kampala and People have nothing called Kasasiro Depots! They tend to Burn Plastic every evening Polluting the Atmosphere with Dioxin! Only A FAILED STATE SOLD OUT..Keep Ululating !!
Quote | Report to administrator
0 #6 Lakwena 2021-02-08 17:37
In other words, a Maoist would naturally congratulates another diabolic Maoist.

E.g., although they have their reporters/anchors on the ground in Kampala (Uganda); on the fateful day, 18th and 19th November 2020 massacre, CGTV, never reported anything about the massacre.
Quote | Report to administrator
Refresh comments list
RSS feed for comments to this post
Add comment