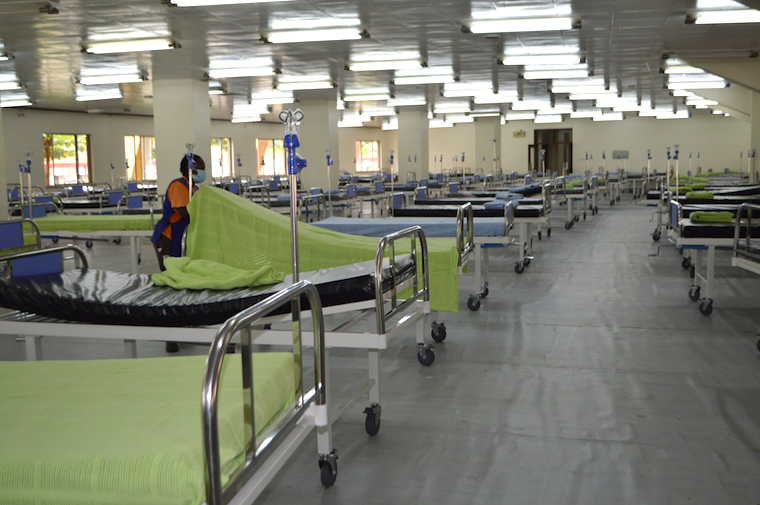 The ministry of Health claims it spent Shs 720 million to rehabilitate structures at Mandela National Stadium, Namboole, before it could be used as a treatment centre for COVID-19 patients.

Permanent secretary Dr Diana Atwine says that the arena was in a sorry state by the time it was taken up by the ministry. She says that they fixed all the plumbing and sewerage works, leakages, floors and walls of the arena to give it a fresh and conducive look for the treatment of patients, and to settle utility bills.

Atwine was appearing before the budget committee of parliament on Wednesday, alongside officials from the ministry of Education and Mandela National stadium to defend their request for a supplementary allocation. The stadium leadership headed by Jamil Ssewanyana is seeking for a supplementary of Shs 1.451 billion for outstanding administrative costs.

Interestingly, while handing over the rehabilitated facility to ministry of Health in September last year, the Catholic Relief Services (CRS) said they had carried out rehabilitation works at a fifth of the stadium to be able to accommodate 1,500 patients. Even the ministry of Health website to date still carries the same content over the matter.

CRS then said the rehabilitation and renovation works cost Shs 400 million. As part of the renovations, the floors, walls, windows and bathroom, facility were worked on. According to her, the renovation works also included extending water to parts of the stadium that previously did not have water.

Atwine however, told MPs that there was no memorandum of any kind entered between the stadium management and the ministry before the facility was taken up. Atwine told the committee that while they were putting up the MOU, the process somehow stalled up to date.

"We have spent Shs 720 million on renovation basically the place had challenges of the plumbing system was not working. Some of the parts we had to replace, the floor on some area was leaking. So we had to do all that renovation. At the time of taking over, the arrangement was that we would have MOU between us and Namboole. Unfortunately, we did not complete this because we did not want to commit the money because they wanted that we pay their workers," said Atwine.

Ssewanyana told the committee that since they have not been hosting events and games from the time the place was designated a treatment centre, they have not been able to generate revenue and have failed to pay their staff and board members, among others.

Atwine says that they requested the ministry of Finance for funds over the management of Namboole and its staff but they have been referred to the ministry of Education, and, to date, nothing has been resolved.

"All our workers because of infections we could not allow them to go home, so they were staying in Namboole Sports hotel. We haven’t actually cleared their bill - that hotel so at the moment it was not very feasible for us to pay the wage bill of the staff of Namboole because we didn’t have the money and did not have the budget. We wrote to finance to guide us and they said we needed to go back to Education and discuss this," added Atwine.

Patrick Isiagi, the vice-chairperson of the budget committee rejected the move saying that the stadium should not be requesting for money after failing to manage the arena even before the place was turned into a treatment facility. According to Isiagi, the stadium management has misused the stadium by hosting more non-sporting events and turning the stadium into a dumping ground.

In an interview later, the permanent secretary ministry of Education Alex Kakooza said that they will ensure that they reconcile the matter before they return to the committee, adding that they hope that an MoU can still be formalised.

Kakooza told the committee that they do need at least Shs 2 billion in the short term according to their plans to rehabilitate the stadium to start hosting regional events.

Unfortunately one remembers well when these same stadium staff refused payments from a certain class of people insisting that their stadium was fully booked and busy for some time!
Quote | Report to administrator
0 #2 kabayekka 2021-02-06 14:59
Now that the facility is well placed to serve the national problems of COVID19, one understands that the leadership of this country have got a treatment for this plague.

This place can now pick up income from COVID19 treatments and vaccines until the end of this new year.

It is unfortunate that sports has moved on because of technology and now television should be the first customer for such major sports stadiums all over this world.
Quote | Report to administrator
Refresh comments list
RSS feed for comments to this post
Add comment