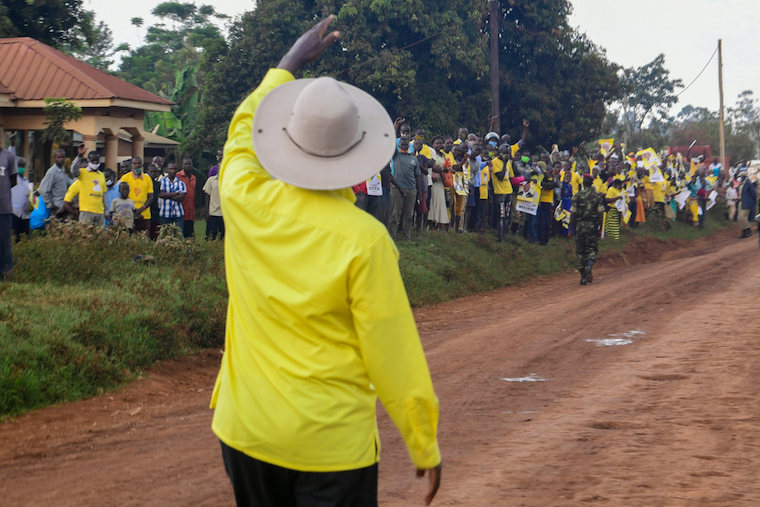 According to interviews conducted with more than a dozen people from the two villages, Museveni did not score zero in the area: he scored 100 votes at St. Kizito Primary School (N-Z) and 152 votes at Nyambulie, giving him a total of 252 votes.

Majority of the votes at the two polling stations went to the National Unity Platform (NUP) candidate Robert Ssentamu Kyagulanyi.

Shaban Muganja, the LC I and NRM chairman of the village where St. Kizito primary school is located Muganja says that although Kyagulanyi defeated Museveni at this polling station, the elderly in the area voted for Museveni, and there is no polling station in Tororo where Museveni “performed badly to the extent of getting zero.”

“That is rigging,” he says. “That is very bad and it’s a crime.” He said the declaration signed by agents of all presidential candidates are clear, showing that Kyagulanyi defeated Museveni with a difference of just eight votes. According to Muganja Museveni polled 100 votes against Kyagulanyi's 108 votes.

A presiding officer of St Kizito primary school polling station, Davis Okach says Museveni got 100 votes but slightly contradicts what others say was Kyagulanyi’s score. While he says Kyagulanyi scored 109 votes, the other people that we interviewed say he got 108 votes.

“If the Election Commission tally sheet read that the president got zero, he says it could be “an error.” Kyagulanyi’s votes; 108 are accurately captured in Electoral Commission tally sheets. Okach claims that on the polling day, he realized that he had been given junior polling assistants who didn’t know anything. He says he ended up doing most of the work himself at the polling station.

Shocked by Museveni’s scores, when the URN reporter visited Nyambulie village where the second polling station is located, the LC I vice-chairperson Ochieng Oculu, who was having lunch, jumped off the table in shock. “I personally voted him,” he said.

Kyagulanyi’s agent at Nyambulie, Achieng Justine said she was at the polling station when counting of votes ended and she recorded “Kyagulanyi scoring 183 votes and Museveni getting 152 votes.”

Kyagulanyi’s votes—183—are accurately captured in EC result sheets. Opio Joshua, a polling assistant at Nyabulie polling station also said Kyagulanyi emerged the victor at this particular polling station with 183 votes while Museveni got 152 votes. Joshua argued that anything that shows Museveni with zero scores is not the “true outcome of our polling station.”

Museveni has in the past complained that NRM is sometimes rigged. But he has never explained at what election level is NRM rigged and the extent of rigging or availed evidence.

“I am not informed about that, I would have let you know,” Phibby Otaala, the NRM Tororo vice chairperson said when asked if the president scored zero at any polling station in the district.

When given names of these polling stations, Otaala said, “I think that is total madness. How do you expect him (Museveni) not to get anything at St. Kizito when that is his stronghold?  That one cannot be true. Those are fabrications.”

And when asked why the NRM leadership in Tororo failed to protect the president’s votes, she evaded the question, arguing that it’s the duty of the Electoral Commission returning officer to announce the truth.

“If you have evidence that the president got 100 votes and they gave him zero, I think that Electoral Commission presiding officer and all those who were responsible should be reprimanded.”

Otaala questioned; “how do you bring in the NRM leadership of Tororo to go to the tally centre, or polling station and tell the presiding officer to enter true results. Is it how it should be?”

She said this is a “big story” because no single radio station in Tororo has broadcasted such news. Otaala hastened to advise our reporters to leave “Tororo out of confusion.” This kind of confusion, she claimed, has been happening only in Buganda.

Electoral Commission spokesperson, Paul Bukenya said he needed time to crosscheck documents from the area before commenting on the matter. All staff who could help with verification, he said were busy organizing Wednesday election. He promised a response on Thursday.

Election rigging is one of the grounds that Kyagulanyi has petitioned the Supreme court to overturn Museveni's election victory. There are more ‘strange’ results registered in the released EC results. For example at Maganjo B C/U (NANO-NZ) polling station with 944, John Karumba garnered 333 votes against Kyagulanyi’s 0 votes and Museveni’s 61 votes.

But then imagine in Somalia where guns and bombs are near by the polling centers. That is why Africa is still very immature with Democracy.

Where a vote will cost half a dollar, ballot stuffing is a normal practice, and military AK47 and police whips finally decide national democratic elections.
Quote | Report to administrator
-1 #13 kabayekka 2021-02-08 03:08
The international community seems all fed up with the political immaturity of Somalia and South Sudan on the continent of Africa.

Most probably the African leadership in these conflict ridden countries fear a non rigged national secret ballot that can tell them to leave the innocent citizens of these countries alone and for them to go home and retire from running state business anymore!
Quote | Report to administrator
0 #14 kabayekka 2021-02-08 03:11
People all over this world want national democratic elections. The leaders do not like them at all!
Quote | Report to administrator
0 #15 Lakwena 2021-02-08 12:31
Quoting Wainanchi:

Very very happy that my opinion about percentage of UGANDANS who would vote for Meuseveni is exactly as I predicted .

Eighty percent,80 %, of all Ugandand would vote for YOWERI KAGUTA MUSEVENI.Exactly!! ...

But Wainainchi aren't you ashamed of your stupidity.

In other words, if "80% of all Ugandans" (including children) voted for your monster; how come he ended up with the fake 58% of the less than 50% of the registered Voters who turned up?