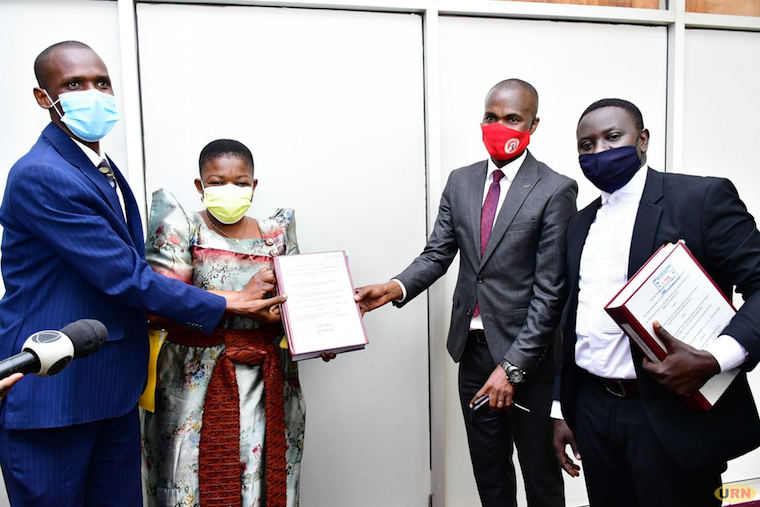 The lawyers led by Anthony Wameli and Geoffrey Turyamusiima today Wednesday served Museveni through one of his lawyers Esau Isingoma from K and K Advocates at the Supreme court in Kololo. The incident was witnessed by the Supreme court registrar Harriet Ssali and the NRM secretary general Justine Kasule Lumumba who had accompanied Isingoma.

Before the service, the parties first appeared before registrar Ssali and it is where Museveni's lawyer Isingoma tendered in a letter showing that Museveni had instructed them to receive the petition on his behalf.

"...We act for and on behalf of His Excellency Yoweri Kaguta Museveni, the President of Uganda" read the letter in part. "It has come to our client’s knowledge that a presidential election petition has been filed with our client as a named respondent. This is to confirm that we have instructions to receive service of process in the said petition.”

The letter concludes: “We request you to inform counsel for the petitioner accordingly."

But Wameli said he had not been given a copy of the instructions and that they wanted to be courteous and be served them through their addresses.

However, Kyagulanyi’s lawyers later served Museveni’s lawyer and Lumumba who had waited for them close to an hour before they arrived at court. The registrar has also informed the parties that she will be giving them dates for when to conduct the pre-hearing by next week once all parties have put in their responses.

Museveni was declared the winner of the January 14th presidential elections with 58.38 per cent of the votes cast by the Electoral Commission followed by Kyagulanyi, who according to EC obtained 35 per cent. Kyagulanyi has listed 26 grounds for which Museveni's victory should be overturned.

He argued that the entire electoral process was a sham having been marred by a number of irregularities such as non-compliance with electoral laws, bribery, intimidation, favouritism during campaigns, arrests and failure by the government to make amendments to the laws that would result into free and fair elections.

The musician turned politician also argued that there was the involvement of the army that reportedly caused violence and hence loss of lives among others. As such, Kyagulanyi asked court to order for a fresh election and issue a permanent order restraining security from ever involving themselves in future polls.

Speaking to URN after effecting the service, Kyagulanyi’s lawyer Wameli said that finally they have gotten some relief after tracing Museveni in Kampala city since yesterday and failing to find him yet today was the deadline. The head of legal department at NUP added that they intend to bring in additional evidence of approximately 400 affidavits to support their case.

"Finally we have gotten relief after traversing almost the entire Kampala trying to find the first respondent to serve him personally as the law mandates. He has instructed KK Advocates and we have notified court and we have served them before the registrar of the Supreme court and now our work is done," said Wemali.

On her part, Lumumba says that everything was done according to the law and she called upon their supporters any time they are approached to give evidence in court to respond positively.

"Am here on behalf of the NRM party that sponsored to witness and it has been done. Here we are we have gone back to look at the grounds in the petition and also wait for the program in court and then we shall do the needful. But I want to tell members of the NRM those who voted HE Yoweri Kaguta Museveni that everything was done with the law and we have our declaration forms ready and when we call on you to swear an affidavit please do come because we must defend our victory," Lumumba.

The panel to hear this petition is yet to be constituted by the chief justice Alfonse Owiny-Dollo before a hearing date can be given.

Lets meet in court and expose the dirt
PEOPLE POWER !
Quote | Report to administrator
+1 #2 Lakwena 2021-02-04 08:35
In other words, it is like handing over to Lumumba the 2021 Mr. Tibuhaburwa's Rigging Guinness Book of Record.

What a country!
Quote | Report to administrator
+1 #3 Omuzira Ente 2021-02-05 14:28
When you still have something to put on table like most elites today life may look normal while we are in deep pit. (Zirindaba Olwange tawa Musibe Mmere).

The International community needs to pick interest in Ugandan affairs to avoid situations when they are only called upon when the house is already on fire.

Its good that a precedent has been set in case of LRA,s war load Ugandans are now being tried in Hague thus all those in power today have indirectly signed that they are also liable to the same court.

The idea of interference in internal affairs of sovereign countries is misconceived and being used by dictators to infringe on democratic principles of the ruled.

Uganda needs to go back to the drawing board of 1962 at Independence and we take stock to see what went wrong and why is it that leaders only promote tribalism as opposed to even distribution of resources and jobs. Those in power are hiding their heads in the sand but they are laying a bad trap for their children.
Quote | Report to administrator
Refresh comments list
RSS feed for comments to this post
Add comment