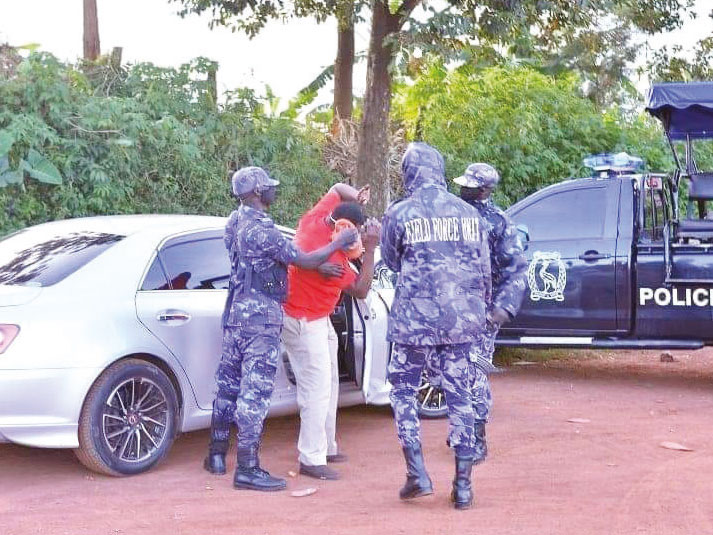 Masked up policemen arrest a man

The scope of kidnappings and the damage to families comes into sobering focus when you see the multitudes of relatives and friends searching everywhere for their missing loved ones.

In a tweet posted at 11:30pm on Sunday, January 31, 2021, Robert Kyagulanyi Ssentamu, the president of the opposition National Unity Platform, said, ‘Panda-gari’ is back in full force. Political activists and ordinary citizens now dread these vehicles called drones.

Countless Ugandans have been abducted and taken to unknown places. Mukasa Kenneth, a comrade, is the latest victim. Kidnapped yesterday, no one knows where he is.”

MICHAEL SSEMUDDU, 48, a resident of Masanafu in Lubaga division, was kidnapped with three others on November 21, 2020 at about 6 pm by men in a drone van. They were picked at Masanafu junction.

Isma Lubega, a friend to Ssemuddu, says five masked-up men dressed in black police uniforms came out of the drone van, bundled Ssemuddu and his three colleagues into the car and took off. His three colleagues were dropped off midway and the captors continued with Ssemuddu to unknown destination. The three have, however, refused to speak to anyone about the incident.

JOHN DDAMULIRA, 51, a resident of Kuleekaana stage on Salaama road in Makindye division, was also kidnapped on the same day from his shop in Kisekka market in Kampala by men in a drone. Ddamulira was abducted together with his son and some customers.

After driving around the city suburbs for hours, Ddamulira’s son, Alimukizi Ddamulira, and the customers were dropped off at Bweyogerere at around 10 pm. The captors continued with the father.

“When they came to our shop, they pointed guns at us; they handcuffed my father, threw us into the drone and they drove off,” he said.

On November 20, Hassan Mubiru, the head of security (Defence) in Mugema zone in Kawaala, was also abducted in a similar way. According to his wife Shadia Nakaweesi, the men who kidnapped her husband stormed their home at around 4 am, broke down the door and bundled him into a drone van. She said the captors claimed her husband had a gun in the house, which she denies.

Nakaweesi said whenever she goes to police to inquire about the progress of the investigations into her husband’s kidnapping, she is chased away.

RONALD MUGERWA, a businessman in Buwama on Masaka road, was kidnapped by men in plainclothes from Equator Gardens Kayabwe, where he was hanging out with friends on January 6.

The men were travelling in two vehicles; a Super Custom and a drone. Mugerwa’s wife, Sharon Kangume, says the pistol-totting men grabbed her husband and his friend, confiscated everything they had on them including mobile phones and drove off with them.

Mugerwa was kidnapped together with Abdul Rashid Nkinga, a NUP mayoral candidate for Buwama town council. When Kangume and other relatives reported the matter to police, they were told to wait until elections were finished.

JULIUS BUTEMBO, a butcher in Katabi Central Market in Entebbe, was abducted from the market in December last year after he was warned against putting up Robert Kyagulanyi’s poster in the market. His wife said that an unknown man called her and told her that her husband had been arrested and taken to CID headquarters in Kireka.

When she reported the matter to Entebbe police station, she was told the men who took her husband first introduced themselves to police and, therefore, they were known to them.

CHARLES KABANDA, the LC1 chairperson of Ssumbwe zone in Bulaga, Wakiso district, was kidnapped in December by men in army uniform at 9pm. The men were apparently driving a drone registration number UBH 614U.

Kabanda’s relatives and friends suspect his kidnapping was politically motivated since he was mobilizing support for presidential candidate Robert Kyagulanyi in the area.

SYLVESTER KALULU, a pineapple trader in Kasubi market, was kidnapped on December 13 by masked-up men. They were driving a drone with no registration number.

The officer in charge of Kawaala police station said Kalulu was arrested on suspicion of being involved in the November 18-19, 2020 riots, which broke out after the arrest of Bobi Wine in Luuka district. During a security press briefing on January 26, Police spokesperson Fred Enanga urged journalists to generate a list of all people who have been kidnapped, the areas and date they were kidnapped, so that police can work with UPDF to look for those people.

During the parliamentary sitting on January 28, Kira Municipality MP Ibrahim Ssemujju Nganda brought the kidnapping issue before the house. In his response, Prime Minister Ruhakana Rugunda said government had taken keen interest in looking into the matter and would act accordingly.

The Speaker Rebecca Kadaga, therefore, ordered the Parliament Committee on Human Rights to take stock of the human rights violations that marred the electoral process and report back to the house within one month. She also urged the administrative and security authorities to respect the rule of law and safeguard human rights.

(Some are transcripts from NTV Akawungeezi)

The unexpected advent of Bobi Wine into politics in 2017, disoriented Museveni so much so that, he has now turned into a worse tyrant than Idi Amin and Milton Obote combined!

He is no longer the smart strategist we had come to know; right now, he has no logical plan in his head apart from relying on survival instincts, hence the abductions, torture, and killings of youthful NUP supporters!
Quote | Report to administrator
Refresh comments list
RSS feed for comments to this post
Add comment