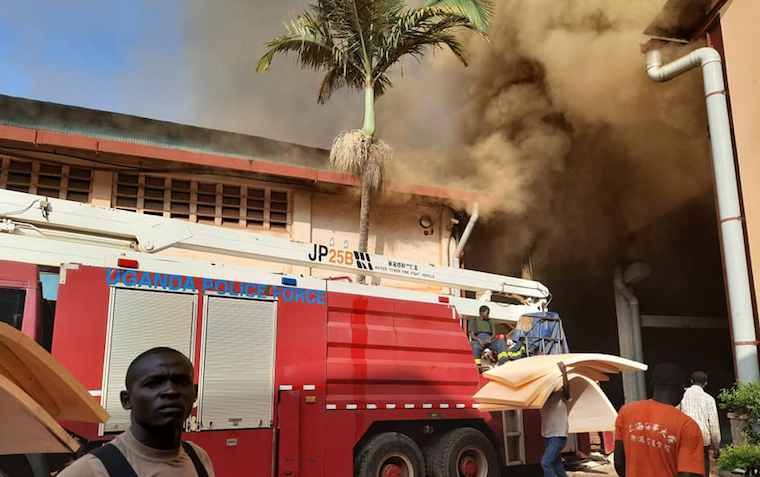 Residents told URN that they saw a huge plume of smoke as the fire ravaged the factory today from around 3 am. According to the deputy Kampala Metropolitan spokesperson Luke Owoyesgyire, there were no reported incidents of death or injuries since all workers were evacuated on time.

Police says preliminary investigations show the fire started from the basement of the store building. The fire was finally put out today afternoon by officers from the Police Fire and Rescue Directorate who teamed up with residents and employees of the factory.

Isma Ssematimba, an employee at the factory, says police's earlier efforts to extinguish the fire were hampered by lack of access roads for emergencies.

The factory is located in a manufacturing hub, which is home to dozens of industrial units with potentially inflammable liquids. Innocent Kakooza, a resident says the neighbouring factories and warehouses are at the same risk.

“Today’s incidents requires the relevant authorities to conduct deep investigations into the increasing cases of fire at this factory otherwise this problem will soon spread to other factories in the neighbourhood,” said Kakooza.

This is the third time in less than three years that fire is being reported at Royal Foam factory. In 2019, the two serious fire outbreaks destroyed properties and injured several workers. At the time police said the fire was started by a welder at the factory.

However, some employees suspect that the fire started from the chemicals used in the manufacture of mattresses before it spread through the factory premises.

0 #1 Lakwena 2021-01-29 12:23
Including Software Viruses, just like the pharmaceutical industries are behind diseases outbreaks like e.g., the current Covid-19 case; sometimes unexplained and/or repeated fire incidences in factories are mischievously syndicated by insurance companies, who indirectly through industrial fire outbreaks, coerce reluctant companies into insuring their investments.

In other words, it is concealed modern cannibalism.