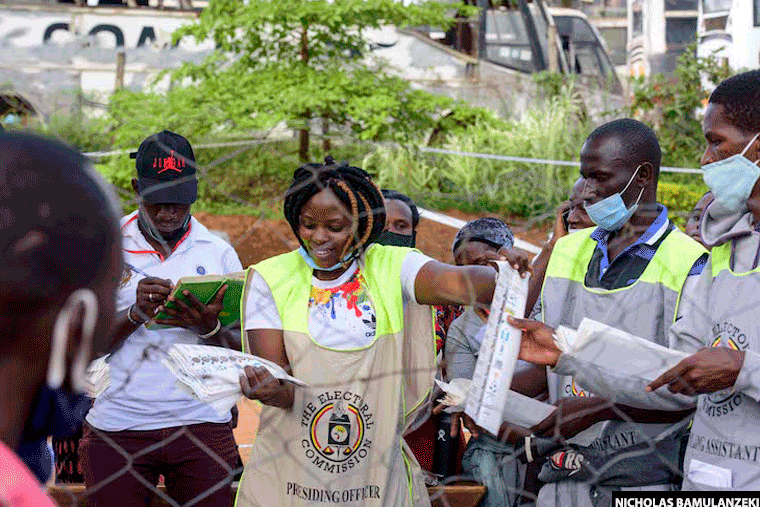 Global outrage at the storming of the US Capitol risks diverting attention from repression by Uganda’s president, Yoweri Museveni, the Nigerian playwright Wole Soyinka said on the eve of Uganda’s election.

Soyinka, a Nobel laureate and one of Africa’s most prominent literary figures, described Thursday’s January 14 election as “crucial for the African continent”, and called for the 76-year-old Museveni and other older African leaders to step aside for a younger generation.

The fierce challenge to Museveni’s 34-year rule by reggae singer-turned-politician Bobi Wine has inspired younger generations in Uganda and across the continent, Soyinka said.

“To me, he represents the spirit of Africa’s future,” Soyinka said of Wine, whose real name is Robert Kyagulanyi Ssentamu. “People of my generation should understand when it’s time for us to give way to new blood, new thinking, more attuned to contemporary society,” the 86-year-old said from his home in the city of Abeokuta, south-west Nigeria.

Addressing the riot by a mob of Donald Trump’s supporters in Washington DC last week, Soyinka said: “It is really sad that this absolutely unprecedented event has taken place in the States right now. My regret about that principally has to do with us on this continent. I know that one of the casualties will be the election in Uganda.

“Attention is going to be taken away, even the little attention it has received. When America stumbles, it is a big blow to democracy in other parts of the world. Dictators take courage from that. We must expect over the next year at least, even further steps backwards as a result of what has happened.”

Soyinka, a prominent pro-democracy activist and a political prisoner for almost two years during military rule in Nigeria in 1967, said democratic gains achieved in Africa after the end of apartheid in South Africa had receded in many African countries under leaders such as Museveni who once fought for those freedoms. Museveni came to power in the years after the removal of the brutal Ugandan dictator Idi Amin.

“It is this cause of human freedom that he is now betraying. He has become in effect the very thing he fought against,” Soyinka said.

“Museveni’s going to fight to the end, and he’s going to continue to fight dirty be-cause he believes power is his natural birthright.”

Many Ugandans have been drawn to Wine’s anti-establishment campaign message, which has come to represent the growing dissonance between elderly African autocrats and the youngest and fastest-growing populations in the world. The response by Museveni and his security agents has been brutal.

Wine, his campaign team and his supporters have been repeatedly attacked and arrested since he declared his candidacy in November 2020. Dozens have been killed.

“I consider it a crime against the future … for initiatives like his to be stymied, to be brutalised,” Soyinka said. The lack of an international response has emboldened repressive actions within Uganda, he said.

PLAY BY THE RULES

“The first contribution that the international community can make, especially the African community, is to serve notice to Museveni that he will be treated like a pariah if he engages in skullduggery over this election. That he’s got to play by the rules and he’s got to allow the opposition a voice,” he said.

Facebook and Twitter were among apps that became inaccessible on several network providers in the country. Facebook had a day earlier announced it had taken down a net-work of fake and duplicate accounts linked to the country’s information ministry.

Soyinka, who will release his first novel in 48 years later this year, has long been an outspoken critic of autocracy in Africa. Museveni, who promised democracy when he came to power in 1986 and enjoyed wide-spread support among leaders in the US and Europe in the 1990s, is a one-time ally.

During the fight to remove the Nigerian dictator Sani Abacha, “we had a long chat”, Soyinka said. “I was impressed by his commitment [but] I wasn’t impressed by his intelligence … In fact I remember when we were in Davos and we were on a podium and afterwards I met some of his people and I said: ‘Look, just tell your man not to talk about things he doesn’t understand.’ And you know what one of them said?

He said: ‘Look at you. You only had him for a few minutes. We have him all the time!’ “He’s a cunning man, he was a determined man, but he’s not necessarily the best thing going in Uganda.”

A recent resurgence of third-term bids and attempts to change constitutions has drawn mass criticism in Africa. “It’s the whole story of one step forward, several steps backward,” Soyinka said.

“Look at what’s happening elector-ally around the continent – Guinea, Ivory Coast. These people [are] changing the constitution to keep themselves in power and what do they do with it when they get power? The same old business, same old stagnation.”

Soyinka said: “Who would have thought, for instance, that someone like Ouattara, under whatever excuse, would change the constitution to allow himself to do that? Then you have Togo, running a dynastic regime,” he said, referring to President Faure Gnassingbé, in power in the tiny west African country since 2005 and who was appointed by his father, who had governed since 1967.

“A successful campaign by Bobi Wine will be seen as a morale-boost-ing event all around the continent,” he said. “When I see young people like Bobi Wine making the effort, I feel re-energised.”

For their lack of morality and understanding (intelligence); the two NRM stooges and irredeemable Humpty Dumpty, Wainainchi and Mama Nonsense are having fun. They think it is a complement for Ndiwulara Mputu Tibuhaburwa being turf.

When Soyinka says that Gen Tibuhaburwa is daft and full of lugezi-gezi (fakeful) the opposite of truthful.

In other words, someone with a fake country of origin, a fake birth (parentage) a fake family up-bring, fake names like Tibuhaburwa, a fake academic background/qualification, a fake intellectual and a fake president of the Republic of Uganda.

A bendit!
Quote | Report to administrator
0 #12 ukraine 2021-01-28 21:34
[quote name="Mama Mia"]Rubbish!!! If the future of Africa lies in illiterate and cannabis smoking Kabobi Swine then Africa is doomed.

I have never built a house that looks like that of Bobi Wine.

I always hear people abusing him that he smokes weed, takes alcohol and I ask myself; how many such people who smoke weed have such a beautiful mansion.

Even Museveni himself reached Bobi Wine's age when he was still living with his parents - Matembe
Quote | Report to administrator
+1 #13 ukraine 2021-01-28 21:43
Quoting Lakwena:

For their lack of morality and understanding (intelligence); the two NRM stooges and irredeemable Humpty Dumpty, Wainainchi and Mama Nonsense are having fun.

They think it is a complement for Ndiwulara Mputu Tibuhaburwa being turf.

They "won' but can not have a debate . they cant even allow a debate. !
Quote | Report to administrator
+1 #14 ukraine 2021-01-28 22:03
more important ex US presidents Clinton , Bush and Obama have said smoked weed. let alone current VP Harris .
Quote | Report to administrator
12
Refresh comments list
RSS feed for comments to this post
Add comment