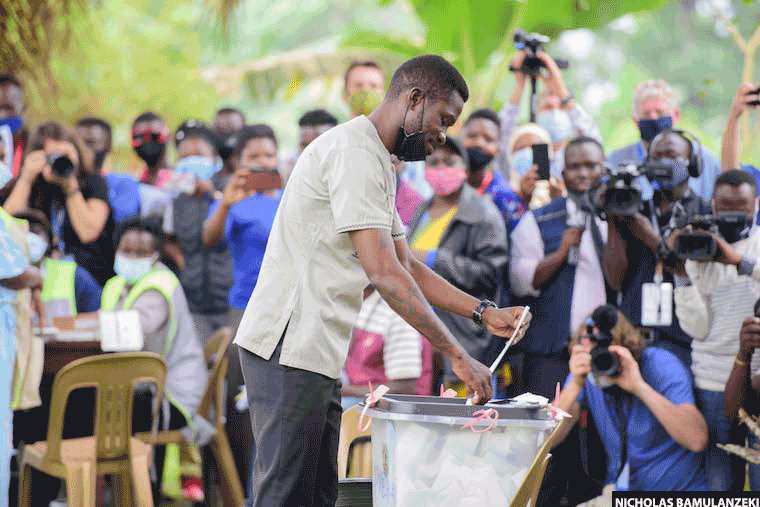 National Unity Platform (NUP) presidential candidate Robert Kyagulanyi aka Bobi Wine is yet to decide on the next course of action regarding the disputed January 14 election results.

The Electoral Commission declared Museveni as the winner of the presidential poll after allegedly garnering 59 per cent of the 10 million cast ballots against Kyagulanyi's 35 per cent. However, Kyagulanyi has since dismissed the declared election results as fake.

Speaking to the media for the first time in 11 days since the army and police besieged his home, Kyagulanyi said although there are strong arguments for going to court, he is almost certain that the court verdict will uphold Museveni’s 'fake' victory anyway. He says that they have overwhelming evidence which if presented to an ‘unbiased’ jury, would rule in his favour.

"While we have all the evidence, we told you that we are in discussions with colleagues on how to proceed about the court which we know that General Museveni appoints, he appoints the entire bench of the Supreme court and we have learnt from the past. You saw what came out of the decision that was arrived at in the 2011 Besigye petition and what came out of the Amama Mbabazi petition. Should we go to court, it will be another front to expose the regime but most importantly the court we believe in most will be the court of public opinion. We’ve believed always in people power," said Kyagulanyi.

Kyagulanyi who was meeting some of the 61 of his NUP party members who were elected as members of parliament, said according to their count, he is the legitimate winner of the presidential election.

Kyagulanyi said that there is still a discussion within their rank and file on whether they should go to court or not. One person with direct knowledge of the discussions told URN that Kyagulanyi personally believes in going to court to challenge the results.

He shares this opinion with the orthodox members of his party who think that the evidence they have is too compelling for any court to ignore. However, the firebrands of the party believe in civil disobedience as the best means to challenge Museveni, and our sources say these think going to court is nothing but a validation of Museveni’s victory.

“There is a tense discussion in the party on whether Kyagulanyi should go to court or not. For him, he believes if he builds a good case, court can annul the election. But he seems to be in the minority; majority of the people he listens to seem not to agree with that point of view,” said a source privy to the ongoing tug of war.

According to the 2017 amendment to article 104, a presidential candidate has up to 15 days after the declaration of results to challenge them in the Supreme court. If he's to challenge the results, Kyagulanyi has up to January 31 to do so. However, that day being a Sunday, this leaves him up to Friday, January 29 to file the petition.

On Monday the High court in Kampala ordered the immediate withdrawal of the police and soldiers who had pitched camp at Kyagulanyi’s home ever since January 13th, a day before the much anticipated general elections. In the dead of the night, the security that was surrounding the expansive property of Kyagulanyi were withdrawn and only one security personnel who normally trails Kyagulanyi in a private vehicle was visible.

However, as Kyagulanyi was addressing the press and NUP MPs, a police helicopter flying at very low levels kept on hovering over the Magere area and Kyagulanyi’s residence, temporary interrupting the meeting with its incessant noise.

‘They are cowards,” Kyagulanyi said.

This timid old man who has his future right behind him is going to do everything illegal, every shameful thing. Don't be shocked when they surround my home again...arrest me & keep in jail thinking that they will stop the revolution - Bobi Wine to NUP MPs #UGElections2021 pic.twitter.com/22lGYXu5Xz

...
What happened there? We either have plan b or we don't. The regime just like the electoral commission would have made sure cadre judges are in place in well in advance. Continue humiliating ur selves.

In other words Juwait Kali, a week before the election day, Chief Justice, Owiny Dolo declared that the impeachable (morally) Judiciary was ready for the aftermath of the rigged "erection".

Remember Juwait Kali, after UPC thru Jimmy Akena sold its birthright to Gen Tibuhaburwa, the appointments of OD as Chief Justice and treacherous Beatrice Anywar of this country/Acholi (all from Kitgum) was Mr. M7's political bribe to excite and sway voters in Acholi Sub-region/Northern Uganda.

But all the same Anywar paid the price of her treachery. Odonga Otto (Pader) was also dilly darling, expecting a Ministerial Post, but he lost his shirt and health.
Quote | Report to administrator
0 #12 Joe 2021-01-29 11:38
Dear Bobby, build your case systematically, before taking any other action.

A well presented body of evidence of cheating which you say is overwhelming, is a good foundation for your plan"B" whatever it is.

Watch out for demagogues who want to lead you to "rushed action" for they will probably not be there when you most need them.

My word to you as an elder is; be wary of people who stoke tribal fires, as Peter Gabriel once said, "you can put out a flame but not a wild fire".
Quote | Report to administrator
12
Refresh comments list
RSS feed for comments to this post
Add comment