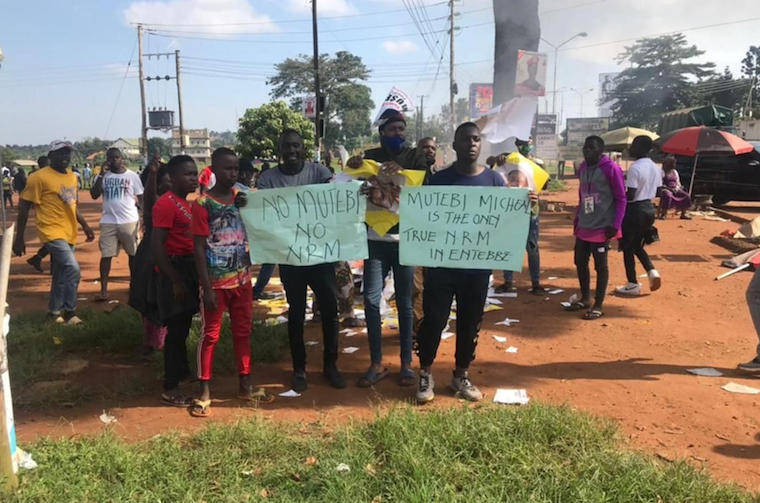 Some of the protestors

The ruling National Resistance Movement (NRM) chairman of Katabi-Kitubulu village in Entebbe, Eric Kyeyune has been shot dead this morning during a joint NRM-Democratic Party protest over alleged vote-rigging.

Kyeyune was allegedly shot dead by the presidential guards, Special Forces Command (SFC) while protesting with other voters in the same area over the declaration of independent candidate Fabrice Ruhinda as the winner of the Entebbe mayoral race.

Also shot with Kyeyune, and seriously injured was Godfrey Baguma, husband of Scholastica Baguma, the divisional seat contender who now says she has even lost interest in the race.

Protestors started convening at Entebbe Central Market as early as 7 am, demanding that the Wakiso Electoral Commission registrar and returning officer Tolbert Musinguzi announce that either NRM's Michael Mutebi Kabwama or DP's Vincent DePaul Kayanja winner of the Entebbe Municipality mayoral race instead of Rulinda.

Led by Mutebi, the protestors, both from the NRM and DP camps say their candidates were rigged out. Some of the protestors say soldiers while firing live bullets targeted Mutebi but Kyeyune who'd moved in front of him was hit instead.

According to the official results released by Electoral Commission on Tuesday morning, independent candidate Rulinda who polled 6,703 votes won the election and in the second position was NRM’s Mutebi with 6,342 votes.

Kayanja, in third place, got  5,576 votes, followed by Nassuna with 2,499 votes and Ssimbwa got 45 votes. Also, former Entebbe Municipality MP Kawuma got 521 votes and Muwonge scored 13 votes. The protestors, however, insisted that Rulinda was a distant third according to their tally sheets.

Uganda Red Cross Society volunteers thereafter took Kyeyune to Emmanuel health centre where he has been pronounced dead on arrival. Since the incident, military police and regular police were deployed but the protestors continued to burn NRM branded T-shirts and posters.

The joint protests come days after Mutebi also led a protest last week over the alleged intimidation by military officers who aren't expected to participate in partisan politics.

Emmanuel Dombo, the in-charge of publicity at the NRM secretariat told URN on Sunday that Mutebi had not informed the secretariat about his fears. He however said should Mutebi lose, it could be grounds for a  petition.

Central Region is tired and will not tolerate rigging extraaaa, so try that crap elsewhere!!!!!

WE TOO, my Dear. The solution requires GUTS. How I wish K'la was [anywhere] on a Nilotic land, where that is UNLIMITEDLY available!!!!!
Quote | Report to administrator
+2 #4 Juwait kali 2021-01-27 04:26
I hear you KASEDE, but because other regions are so far away the regime rigs as it pleases but the youth there have to step up on the platter like right now.

We cannot allow museveni to continue with the leadership of the country where police wear face masks to murder people in broad day light never!!!!!!
Quote | Report to administrator
0 #5 Lakwena 2021-01-27 10:08
In other words, when you keep a deadly cobra for a pet, it will one bite you and/or members of your family.

Under Gen Ndiwulira Tibuhaburwa, Uganda is a deadly country, in as far as deadly random violence is concerned. Not only deadly for the opposition, but also the NRM members.

E.g., the deadly and organized violence/murder can be exacted even to non complaint NRM members, like the late NRM activist and mobilizer, Zebra the Boxer, whose midnight execution was ordered from above. Eish kepis!
Quote | Report to administrator
Refresh comments list
RSS feed for comments to this post
Add comment