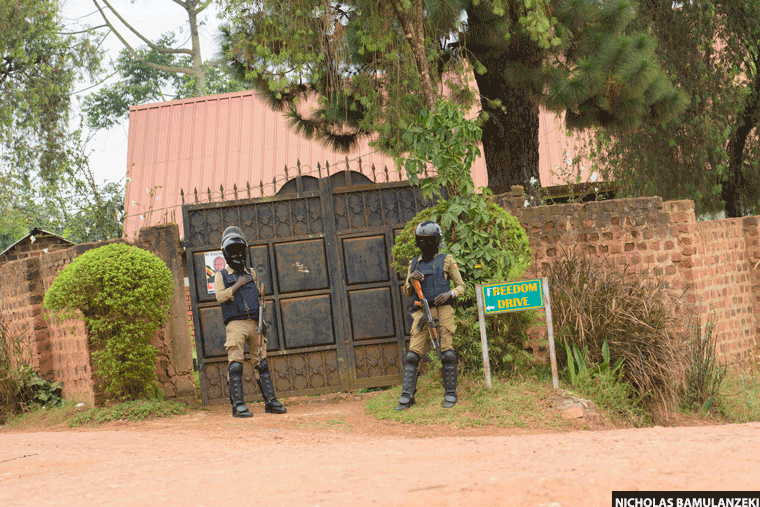 Police will vacate the home of National Unity Platform presidential candidate Robert Kyagulanyi but will maintain their surveillance 'to ensure he doesn’t break the law' according to police spokesperson, Fred Enanga.  Enanga says that even though they haven't yet received the court, they will withdraw from Kyagulanyi's home in Magere, Waksio district later today because they are a law-abiding institution.
“We have to ensure security is maintained since it is our prerogative to ensure we detect and prevent crime," police spokesperson Enanga said. "The surveillance would ensure Kyagulanyi doesn’t instigate violence among the public."
Hours after the High court ordered the army and police to immediately vacate Kyagulanyi's home, there is still heavy security deployment near and at Kyagulanyi's home. Kyagulanyi and his wife Barbara Itungo have been locked up inside their home since January 14 when Uganda took to the polls to elect their president and members of parliament.
According to the Electoral Commission, the incumbent, President Yoweri Museveni won the presidential race after polling 59 per cent of the ballots cast while Kyagulanyi garnered 35 per cent of the ballots. Kyagulanyi has since rejected the results and called on Ugandans who voted for change to reject Museveni as their president.
Roadblocks are still placed on all feeder roads leading to Kyagulanyi's home and there are still restrictions to all people who want to access the house. Only village locals are allowed past the roadblocks after presenting particulars as area residents.
Other motorists and journalists are still being turned away at the roadblocks with soldiers and police officers seen still patrolling the area in vehicles and on foot.

Edward Ssebagala, a diehard supporter of Kyagulanyi and a resident of Gayaza in Kasangati town council, Wakiso district said when they heard that court had directed security to vacate the home, they came hoping to see their 'president' but they were turned away by security.

Ssebagala hopes that the security agencies will respect the court order and their leader regains his freedom of movement and association.

0 #1 WADADA rogers 2021-01-25 23:45
I hope the word surveillance does not mean waiting outside the gate and blocking him from going to the market or to visit his relatives.
Quote | Report to administrator
0 #2 WADADA rogers 2021-01-25 23:50
When your name is enanga and you come from the north, you have to use your head enanga, please and please, be careful with the way you speak nosense with ease, one day you will cry with nowhere to hide, one day you will behave like Kibalama who now claims he was coached to say what he said.

You could also go to Kitigoma just after Mabira and look the home of Fadhul Ali who was one of the super guys during Amin, he spent a better part of his life in Luzira as a dejected and an isolated man.
Quote | Report to administrator
+1 #3 Sula 2021-01-26 08:15
1- Kyagulanyi has rejected the reults. he is not the first to reject the results of an election.

2-The civilizedd way is to allow him to challenge the results as per Constitution. refusing him to move about is not a solution.

3- Whether musevni likes or not it is not yet over.

4- Raila Odinga in the last election in Kenya poured over 1 M people in Nairobi ,went and swore himself in as President. Kenyatta never shot a single person and that is going to change the politics of Kenya. Otherwise, Kenya would be Somalia now.
Quote | Report to administrator
+1 #4 Sula 2021-01-26 08:20
1- Museveni needs to come to his senses.It was a favour from Ugandans.

He is not the best ,instead he has been a shame.People are not fed up. They want their country,whether he likes it or not

One wonders and pity those young men & women in uniform, how do they feel serving museveni's ego, greed and wickedness!

Do they ever contemplate why they do what they do in the name securing peace, but for who! I pray that they wake up and refuse to be used to terrorise Ugandans.
Quote | Report to administrator
0 #6 kabinda 2021-01-26 14:56
Still there doing what?You already helped steal the election.

Enanga, do you have toilets there or you are shamelessly surrounding the guys house with a stench of urine and rings of feces? what species of humans are you? Orangutans would do better than this.
Quote | Report to administrator
Refresh comments list
RSS feed for comments to this post
Add comment