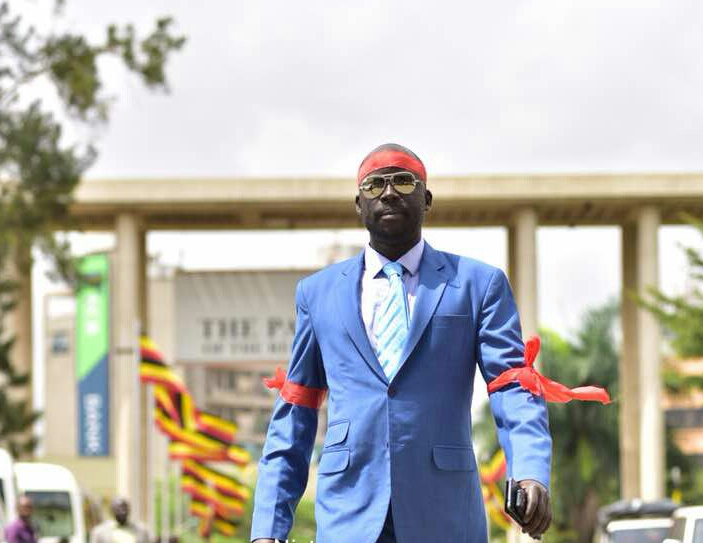 Otto was first hospitalized in Gulu Regional Referral hospital after collapsing while recording a statement at Pader Central police station concerning his escape from police custody on January 6, 2021.

The MP had been arrested by police from Awere trading centre for alleged failure to observe standard operating procedures instituted by the ministry of Health to curb the spread of Covid-19, and holding campaigns past the 6 pm deadline set by the Electoral Commission.

From Gulu hospital, Otto was transferred to St. Mary's Hospital Lacor also in Gulu before being transferred to Nakasero hospital in Kampala when his health condition further deteriorated.

"Hello. From Pader police station to Gulu Regional Referral hospital, then to Lacor hospital, then to Nakasero hospital now I have been referred to Nairobi this evening for more medical examination and treatment. I will be back when doctors say I am well. Pray for me. Thank you, Hon. Otto" he said in a message to URN.

Gilbert Olanya, the Acholi Parliamentary Group general secretary said today Sunday that Otto has been complaining of chest and internal organs pain and suspects to have been poisoned.

Otto lost his fifth term bid for the Aruu County parliamentary seat in the just-concluded parliamentary elections. He was defeated by independent candidate, Christopher Komakech who was declared the winner after garnering 9,327 votes against Otto’s 5,953 votes.

But, it's going to be impossible for M7 to depart as Ugandans have just renewed his mandat & assured his 40 years of rule!

But of course Ugandans can do as Libyans; UNITE immediately to revoke their vote & show M7 way out!

Even without National Leadership as it is & with the tribalistic system standing firm, Ugandans will then have to go streight for Independent Tribal States!

Then, from which tribal land will M7 fight back from then?

Until Ugandans decide to end M7's demoniac rule in UNITY, the demon is assured of 40 years & will destroy Ugandans to a point of no return!

Museveni emphasized it many times before last fake election that Uganda belongs to him & will never give it to any other, yet Ugandans went & legalise him & are ensuring he rules in peace!

So, how can Ugandans expect something different?

Dr Obote was so right laughing, insulting, ashaming Acholi saying; you have no leadership & without me, you wil be lost dogs!

What will leadership less Acholi do without Museveni who killed them, sent them in exile, made UN build refugee camps for them, reduced them to nothing?

Being nothing is what Acholi are good at!

Kony is waiting for Museveni to forgive & give him permission to come back to Acholiland as slave!

Africa is hostage to useless rulers! But Africans can wake & rise up to end this abuse, then ask UN to run the continent, while Africans who want to be leaders get real education in Administration, Governance, Respect & Love of their people!

For once, UN would be doing the right thing for Africa, instead of encouraging migration, while usless rulers destroy the continent!

Tunisia, Egypt have shown UNITY of a people can end dictatorship/bad rule, but NEVER brought good & real governance, because of lack of Education of those who want to replace dictators/useless rulers!

Ugandans have protected Museveni through fake elections for too long, but they can UNITE to revove the election, then ask UN to run the continent to give a beginning to a different start, as Kosovo had chance to!
Report to administrator
0 #14 Akot 2021-01-26 17:56
WADADA rogers, thanks.

Ugandans MUST UNITE to REVOKE the election result! Then as there is no National Leadership, ask UN to Administer the country while they decide what they want.

Why do Ugandans prefer living like rats without holes that belong to them, while migrant Museveni owns their rat holes & tax money & decides who gets?

Obote took good care of Mulago Hospital. He was even treated there when he was shot through the mouth.

Please acknowledge and complement appropriately even if you did not like Obote.

Dr Obote had his issues with Acholi/Buganda, because they defied him by being DP, yet, he never blocked them from campaigning, holding gathering!

Dr Obote build hospitals in districts without discrimination, even though he didn't equip them because of lack of money as then, Uganda depended only on its income & not on outside loans/donations!

Oh! If only Ugandans could remember Dr Obote singing them to UNITY, while Bagandans/Acholi DPs would simply campaign with words & Ugandans were not at tribal war, but just wanted to live as FREE people in their country!
Report to administrator
0 #16 Akot 2021-01-26 18:30
WADADA rogers, thanks.

Ugandans MUST bring down the tribalistic system & UNITE NOW, or the next 5 years will be the worst for them!

Ugandans MUST stop fighting one another, fighting for survival, while Musveni rules with smile, watching, enjoying them destroy themselves!

There will never be opposition leader to Museveni as long as the tribalistic system stands! But UNITY will block & end the demon's rule & Ugandans will go for the kind of governance they want after!

Any one still calling himself opposition leader & fighting the fake election resuslt is only ensuring Museveni rules in peace, while tribally divided ruled Ugandans fight one another!
Report to administrator
0 #17 Lakwena 2021-01-27 09:44
Pride comes before the fall goes the adage.

After brazenly telling Ugandans and whoever cared to listen that: from then on, he Odonga Otto will have nothing to do with FDC, except over his dead body; who ever thought OO would lose the erection and end up wherein he is now?

In other words, by natural consequences all traitors have the same fate: Consciously or unconsciously physical, social, economical and/or political suicide.

E.g., just like Judas Iscariot who handed over Jesus to his persecutors and executioners and committed suicide because of shame, look around how many of the FDC traitors survived their treachery?

Starting with Beti O Kamya, Prof Ogenga Latigo, Beatrice Anywar, Mugisha Muntu, Winnie Kiiza, etc., they have all lost their shirts and skirts. In other words, in the next 5 years they will lose their pennies as well their political base.
Report to administrator
12