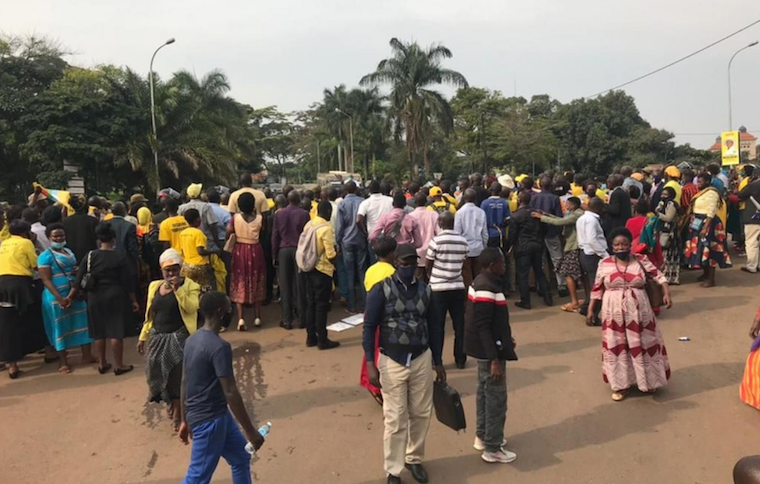 National Resistance Movement (NRM) candidates contesting for the mayoral and councillor seats have bypassed the party secretariat in Kampala and stormed the country's highly restricted State House in Entebbe, the residence of the national president, to demand 'facilitation cash' for their electoral activities.

The candidates, from Kiruhura, Mbarara, Jinja and Mbale arrived Friday by 7 am in Entebbe, camped at the Municipal offices until after 4 pm when they tried to gain access State House. President Yoweri Museveni, who arrived in Entebbe in the afternoon simply waved at them and proceeded to State House.

The Special Forces Command (SFC) officers at the entrance of State House blocked the rowdy group and asked them to write a list of their complainants and demands.

The candidates are demanding that their facilitation ranging from Shs 500,000 to Shs 3 million be paid to them in advance before next week's elections slated for Monday, January 25.

They say that the facilitation will help them pay polling agents and also conduct last-minute campaigns, more so now that they face very stiff competition from Robert Kyagulanyi's National Unity Platform (NUP). However last week's general election results announced by the Electoral Commission did not indicate any strong NUP presence in Kiruhura and Mbarara.

Museveni, while exiting State House later, briefly addressed the candidates and asked them to be patient. He added that he will ensure that the NRM secretariat handles their concerns expeditiously. Some of the candidates who stormed State House said that they fear for their money if it is to be handled by the party secretariat.

"Some of us have been allocated Shs 3 million but we know that we shall receive probably Shs 1.5 million because of dealers at the secretariat. When the party gives you Shs 500,000, that woman Lumumba [Kasule, NRM secretary general] gives you Shs 100,000," one said.

Many of the candidates turned aggressive when they learnt that the media was also present, "We don't want media, this is a private issue between us and the party chairman. We are tired of the media. Fuck the media, we can even beat you up" they said.

Emmanuel Dombo, the NRM's director for information and publicity, says the candidates should have first sought audience with the secretary general Kasule Lumumba and then the party chairman if they were still dissatisfied.

"But even this money is supposed to be sent to them a day to the election because it is meant for payment of polling agents, as some may divert this money of they receive it much earlier," Dombo added.

The facilitation is part of the Shs 31.2 billion the NRM plans to spend on its candidates' campaigns and other logistics such as transport, airtime, water for campaign agents and money to print posters. The facilitation has been earmarked for party flag bearers at parliamentary, district, city or municipality level.

+15 #1 kabinda 2021-01-23 15:31
This is now politics of primitivity and desperation .Abewo desperados think this is the way to build the future of Uganda? Facilitation for what?

Museveni's micromanagement style has truly brought chicks home to roost. Lets see how governing by handouts from statehouse can be sustainable .Pathetic idiots.!
Quote | Report to administrator
+4 #2 Akao 2021-01-23 18:18
I hope they bring covid to museveni. That's seems the only way we will get rid of him
Quote | Report to administrator
+2 #3 rubangakene 2021-01-23 18:34
Kabinda,
Who do you think created this "desperation", eh?

Kabinda,
Who do you think created this "desperation", eh?

You are right; the birds have indeed come home to roost or is it 'roast', I wonder'. It is a political nightmare of a circus if you ask me!

Yes, agree. It is not my wish to go that way, but that the drums for war (and possibly the horns too in the north and east) are rather loud and clear now.