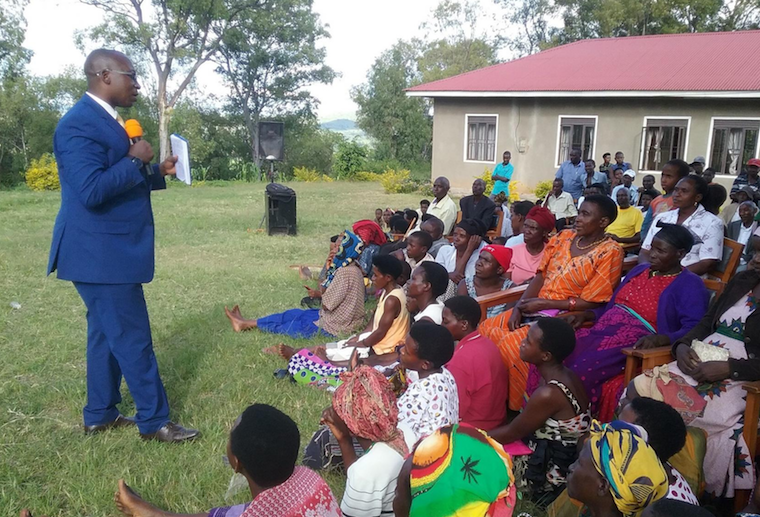 Rukiga county MP Herbert Kabafunzaki has threatened to withdraw his two ambulances as well as stop giving condolence money to families if he loses in the general election slated for Thursday this week.

Kabafunzaki also the former Labour, Employment and Industrial Relations state minister runs two ambulance registration numbers; UBA 466A and UAU 677X, which he procured in 2017 and 2020 respectively. He also contributes Shs 30,000 as condolence fees for every person that dies in the county.

The legislator surprised voters in Kamwezi sub-county on Monday when he revealed that he no longer has mercy for people who don’t support him. He earlier made similar threats in Rwamucucu sub-county a fortnight ago.

According to Kabafunzaki, he has only opted to help residents who support him politically because he has gained nothing in helping everybody. He revealed that even if he meets any person involved in an accident, he will just mind his business because the people of Rukiga have not realized how helpful he has been to them.

He also described as fools those who criticized him for declining to handover the card of the ambulance registration number UAU 677X to Rukiga district local government.

Kabafunzaki’s threats have drawn mixed reactions from voters. Oliver Kirungi, a resident of Maheru in Rwamucucu sub-county says that however much Kabafunzaki’s ambulances have been helpful, it should not be the only basis for him to compel people to vote for him. Kirungi says that people changed their views on Kabafunzanki, the moment he was implicated in a corruption scandal.

Frank Birungi, another voter from Rwamucucu sub-county instead supports Kabafunzaki saying that it is very wise to help a few people who love him than many who don’t want him. According to Birungi, voters detest Kabafunzanki simply because he was involved in a corruption scandal which he says shouldn’t be an issue since the matter is still in court.

Kabafunzaki started losing ground in April 2017 when he was arrested for allegedly soliciting a bribe of Shs 5 million from Muhammad Hamid, the proprietor of Aya Investments to clear him of allegations of sexual harassment. The matter is still in court. He was later dropped from his ministerial post.

Drake Twinomujuni, a resident of Mahura village in Nyakashebeya parish in Kashambya sub-county says Kabafunzaki has resorted to using threats after realizing that he has lost support. Twinomujuni says that it is too late for Kabafunzaki to deceive people of Rukiga that he holds value politically.

Agnes Success, another voter from Muhanga town council wonders how Kabafunzaki will identify people who voted for him and those who did not. Success also questions why Kabafunzaki is seeking support from people he calls fools.

Kabafunzaki, who is contesting for a second term as an independent candidate lost to Adson Kakuru, the presidential advisor in-charge of wetlands during the September 2020 NRM party primaries.

He shows himself to subscribe to politics of thuggery intrigue and opportunity. He needs to take his ambulance and park it at his house for personal use. IDIOT!
Report to administrator
+2 #2 Kalemera 2021-01-12 22:13
Quoting kabinda:

that is not seeking votes and trust to lead. That is holding your electorate at ransom. It is a disqualifying statement.

He shows himself to subscribe to politics of thuggery intrigue and opportunity. He needs to take his ambulance and park it at his house for personal use. IDIOT!

I don't care one bit for Kabafunzaki. But he's no different from any/most politicians, regardless of their party.

They only donate money because they hope it will build their profile, not because they care for their society. Once they get power, they repay themselves through corruption, grabbing property, etc. Desperate Kabafunzaki is only voicing this.
Report to administrator
+1 #3 rubangakene 2021-01-12 22:35
The circus has arrived in the village. The man is playing politics of the 60s.

I suppose he also promised them face masks.
Report to administrator
+3 #4 kuku wazabanga 2021-01-13 10:44
Kabafunzaki should leave politics and do business instead. In business you give your commodities to one who has paid.

If someone has no money to pay you do not give them your goods. Leadership does not work like that.

An Mp is supposed to work for the common good. Kabafunzaki has a shopkeeper's mind. He does not deserve any vote for MP. He is more of a dealer than a leader.
Report to administrator
0 #5 Eric L 2021-01-25 14:14
This for me is a taste on the integrity and intelligence of the people of Rukiga.

If this is the kind of person they can elect,then it tells a lot about who they are,desperate frauds.
Report to administrator