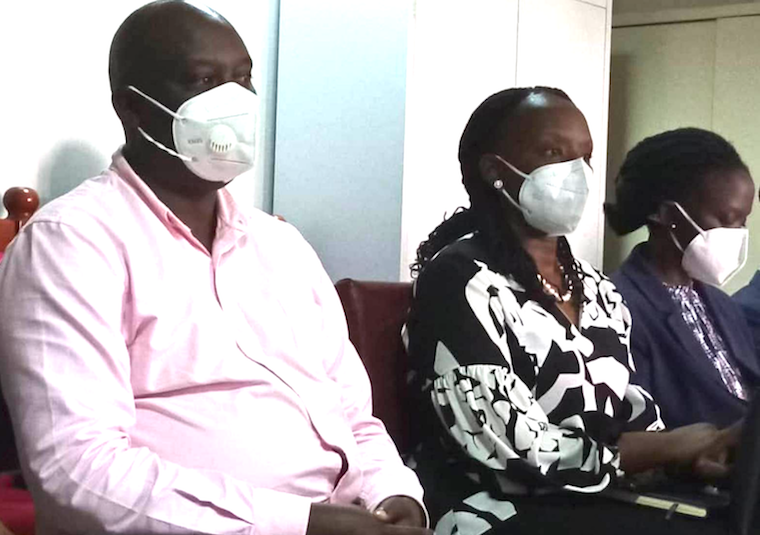 Sodo and Shartsi at court earlier

Cases of outright voter bribery have surfaced in Sembabule district ahead of the general elections scheduled for Thursday this week. Ugandans of 18 years and above go to the polls this Thursday to elect the president and members of parliament for the 2021-2026 term of office.

However, in Sembabule residents say cases of bribery have surfaced in the area with candidates or their agents reaching out to voters with cash handouts and other material items in exchange for their support.

Naziruh Ddamulira, a resident in Mabindo sub-county, says the practise is widespread in Mawogola North constituency where there is a tight race between President Museveni’s younger brother, Godfrey Aine Kaguta aka Sodo and Shartsi Musherure, the daughter to Foreign Affairs minister Sam Kahamba Kutesa.

Shartsi and Sodo both contested for the National Ruling Movement (NRM) flag ticket. The party election commission declared Sodo winner, but the results were contested before a tribunal and in court by Shartsi which both failed to rule on the matter. Both candidates were told to contest as independents.

Ddamulira accuses Sodo’s camp of running their campaigns on bribery instead of convincing the electorate on what they intend to do for them. He says the voters are paid depending on one’s negotiating power. He says besides the failure by residents to resist the temptation of taking bribes, police have failed to curtail the habit.

Fredrick Tumwine, the candidate for the Mujiwala sub-county male youth councillor’s seat confirms that the campaigns in the area have lately been highly monetized. He explains that they are also witnessing a number of campaign brokers in the area, whose main responsibility is to identify, negotiate prices and buy off supporters of the opposing political camps.

According to Tumwine, the parliamentary campaigns in many of the constituencies in the area have been reduced from ideas to how much a candidate can afford to attract support from gullible electorates. He alleges that besides voters, there are also reports of camps that attempt to bribe some candidate out of the race which is equally improper.

Ismael Wagaba, an independent candidate in Mawogola North constituency confirms that the problem is widespread to the extent of people forfeiting their voter location slips and national identification cards in exchange for bribes.

He says that the malpractice was carried from (NRM) primaries that were largely determined on bribery and voter intimidation.

"We move through downwards, we have found or I have found that these candidates have gone on paying their agents and even list down how much have you paid and who are you going to vote. Some of them write even their NINs [National Identification Numbers] and surrender them to the buying candidate. They tell them 'am going to give you Shs 20,000 or Shs 40,000 but let me first give you a deposit of Shs 20,000 but give me your national ID. On the polling day, we shall send our agent with your balance and your ID. People have given them in these elections. It has become more because in the past election it has been the underdog, the poor against the rich. Now we have the rich gangs on the side of the Museveni family versus the side of Mr. Kutesa’s family. They all say we have money, we have guns," Wagaba said.

However, while campaigning in Kiwuula trading centre on Sunday, Shartsi disassociated herself from any forms of illegal campaign practices, arguing that her support is largely attracted by the messages of hope she preaches during campaigns.

Sodo on other hand challenged the security authorities and the Electoral Commission to reign in over reports of malpractices that are likely to jeopardize the integrity of elections in the area.

Hannington Mugasira, the Sembabule district Electoral Commission returning officer has asked the residents to cooperate with his office by reporting the culprits for reprimand.

0 #1 Kasede 2021-01-11 16:52
That is too close to the "bushmen". WE CAN EXPECT THAT [BOTH] THE EC & POLICE WILL NOT [INDEPENDENTLY] HAVE THE GUTS TO DO ANYTHING ABOUT THAT, JUST AS IT WAS WITH THE CONTESTED PRIMARIES RESULT IN WHICH THE NRM ITSELF WAS TOO INTIMIDATED TO DECIDE EITHER WAY. [It would not be beyond the courts under this regime to declare that both candidates can represent the same constituency, would it?]
Quote | Report to administrator
0 #2 kabinda 2021-01-11 17:46
I am not sure how this blatant act of crime which is an everyday practice of Museveni is a screaming headline.
Quote | Report to administrator
0 #3 Juwait kali 2021-01-11 20:34
Kabinda i agree nothing makes sense all opposition representatives are being kidnapped, killed but we have to fight rather than surrender which will make matters worse in the future.
Quote | Report to administrator
0 #4 Kabayekka 2021-01-12 09:07
Of course Gerrymandering as a crime of democratic election worldwide is an acceptable practice in NRM democracy.

One cannot do anything about it really. Even if you are a professional and nice UPDF citizen!
Quote | Report to administrator
0 #5 Eric L 2021-01-12 09:58
Now thats the true and genuine NRM ideology.

They have mastered this from immediate post bush days,now they are professionals at the same.

The advance of this buy-out/off method is threats,coersion and bump-offs.
Quote | Report to administrator
0 #6 Odongkara 2021-01-12 11:29
Take and eat that is what the Bible says because it's your tax money being abused, so you're entitled to chew it without fear or favour, just eat!

But ask God for wisdom to vote wisely, "if any of you lacks wisdom, you should ask God, who gives generously to all without finding fault, and it will be given to you.
James" (James 1:5 NIV).
Quote | Report to administrator
Refresh comments list
RSS feed for comments to this post
Add comment