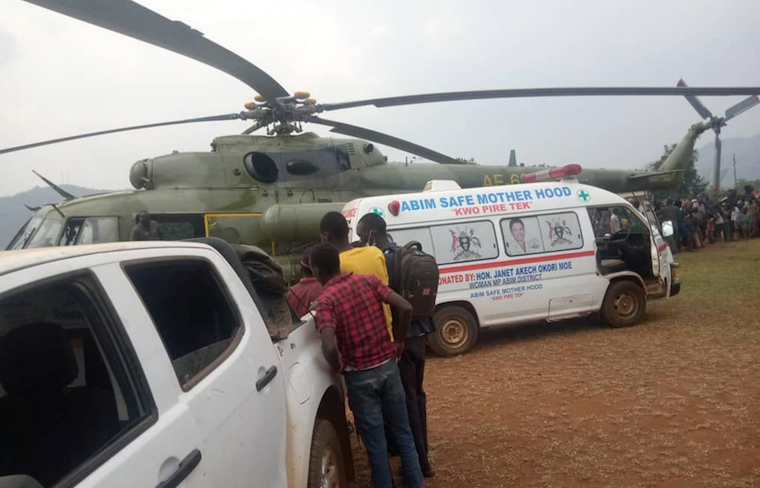 The army helicopter was used to evacuate the victims

Karamoja is mourning the death of eight footballers following a motor accident on Saturday in Abim district.

The footballers were travelling for a friendly match in Kotido district on Saturday but unfortunately, the truck they were using failed to engage gears while going uphill, making it to roll several times, killing eight players instantly.

Living Twasagye, the district police commander of Abim described the incident as sad. He said the accident happened at around 3 pm in a village called Angorom in Chamkok sub county has paralyzed government activities in the district.

"There were about 100 people who had boarded the truck and that included players and their friends but when the truck reached at Angorom, it failed to change gears forcing it to roll backwards, killing the people," Twasagye said.

According to Twasagye the police have already opened up general inquiry file of the accident but said preliminary investigations shows that the truck was overloaded and it was also in dangerous mechanical condition.

Samuel Mpimbaza Hashaka, the resident district commissioner said the incident has happened at a wrong time when the country is warming up for the general elections scheduled on Thursday.  He said those injured have been rushed with the army helicopter to Matany hospital for proper treatment.

"President Museveni sent the helicopter to airlift the injure players and they have already been taken to Matany hospital," he said.

0 #1 Lakwena 2021-01-12 08:24
In other words, in the 21st Century, such means of transport not even fit for transporting cattle (open rickety DMC truck) to transport human beings and the accident therewas, only happens in Uganda.

Why do you need to add that in a Ugandan newspaper on a story about Ugandans? Useless qualifier, if you ask me.
Report to administrator