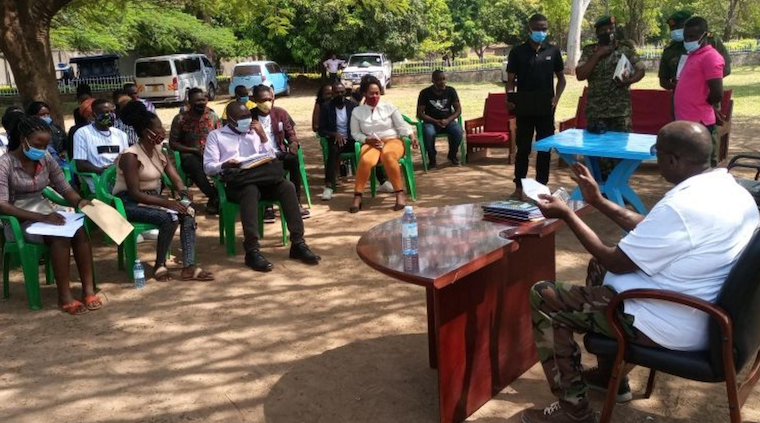 The 28 youths comprising both of male and female, reportedly travelled from Kampala City on Friday evening to meet Saleh to demand payment for online content that they had purportedly published in favour and support for President Museveni and the National Resistance Movement (NRM) party ahead of the 2021 general elections.

The journalists camped at Lumumba Square in the 4th Division army barracks in Gulu City as they waited to secure audience with Saleh who was holding a live relayed debate on the Capital FM's Capital Gang show.

Shortly after the show, Saleh headed to meet the youth who claimed that they were reporting on economic prosperity brought by the NRM government, local economic development led policies and the achievements of the Operation Wealth Creation (OWC) using their own finances.

Through their spokesman, Ronald Twehoyo who did not disclose how much they need, the youths demanded to be compensated for the expenses they have incurred to spread the good gospel and progress of the NRM party in Uganda.

The youths had verbal exchanges with Saleh and demanded for their fares, accommodation, feeding and payment for content produced several months ago. In his response, Saleh said that the youths have been fully constituted from the music entertainment industry into active politics and so required to dedicate themselves fully to the NRM party.

However, Saleh demanded that the purported journalists submit an invoice and previously done works before they could be paid the money they wanted, citing that their visit was unplanned for.

Saleh told the youths to sort out their issues with his IT manager only identified as Deo before he left in his official motorcade to an unknown destination, leaving the youths stranded at the 4th Division barracks as Brig Gen Flavia Byekwaso the army spokesperson pleaded with them to give Saleh more time to sort them out.

This country has become a rotten pile of crap. Hello!! "Economic prosperity brought by the NRM"? With this prosperity you need to stop licking boots.
Report to administrator
+9 #2 Tobi Maya 2021-01-10 16:11
Capital FM's Capital Gang show in Gulu was the most boring I've ever listened.

In fact Capital FM was clearly rented from 10 am to 2 pm to campaign for NRM. The studio was crowded only by NRM loudmouth fanatics in uniform and civilian.

Kasyate failed to moderate the show (you'd think he was hosting his usual ladies on Desert Island where he showers praises on them accompanied by fake loud laughter) and Saleh took over.

Then the usual chorus of lies and foolery about how every Ugandan has become very rich, thanks to Museveni ... I switched off.
Report to administrator
+2 #3 Zaitun 2021-01-10 18:29
Poverty stricken journalists vs a beefy, potential and staunch thief that can scarcely carry his own weight!!!!

Oh, my once respectable country that has turned to be "The cave of Ali Baba and his Forty Thieves!"

Who cursed us Ugandans to allow all these thriving thieves coming from all the way from Rwanda to reduce us to slavery as depicted by those so-called NRM journalists begging for money?

Yes, you write shit to please and support a ruffian, a die-hard killer and thief; but here you are begigging from what he has taken from your pockets!

Shame on you our so-called learned journalists! I am sure your children must be cursing you on seing these images.
Report to administrator
+2 #4 Jama 2021-01-11 08:49
Crooks trying to cheat a crook .
Report to administrator
+1 #5 Nakimuli Shari 2021-01-11 10:31
These journalists should have gone to NRM Secretariat for payment for writing content in favour and support for Museveni and NRM party ahead of the 2021 general elections.

So Saleh is alternative party treasurer for his brother's NRM project?

During capital gang he was denying that the Kaguta family is not sucking all the resources of the country for themselves and relatives.
Report to administrator
+2 #6 okia kesiro 2021-01-11 11:44
That is what they deserve. They should not be paid because they have been reporting lies for personal gain.saleh, teach them.
Report to administrator
+2 #7 Humless 2021-01-11 12:12
Clearly these are conmen stealing from nrm and from ugandans.

They should be taken to courts of law to explain their roles.
Report to administrator
+1 #8 Lakwena 2021-01-11 18:24
But on whose/what/which budget does Salim Saleh Operate, iin order to e.g.suggest/instruct the "... journalists submit an invoice and previously done works before they could be paid the money they wanted, ..."?

Although long time/once upon a time Gen Saleh and his step brother, our Problem of Africa, Author and Master of Violence; Gen Tibuhaburwa retired from the UPDF, wherefrom do these guys get the authority to continue putting on, sometimes incomplete UPDF uniform?

In other words the duo own the UPDF and therefore do whatever they want with the uniforms and arms. Yet they have gone the mile to raid, confiscate and/or murder NUP supporters who dared put on red berets and overalls; that have nothing to do with the military.

God where are you, over Ugandans human rights justice.and resources, which are being abused by Gen Tibuhaburwa, his step brother and other associated parasites (Kawukumi)?
Report to administrator
+1 #9 rubangakene 2021-01-11 19:45
He walked away. He could not laugh or cry.

He realised the situation has become so DESPERATE at the grassroots. He could hardly wait to to go and have a quiet word with his elder bother on the phone.
Report to administrator