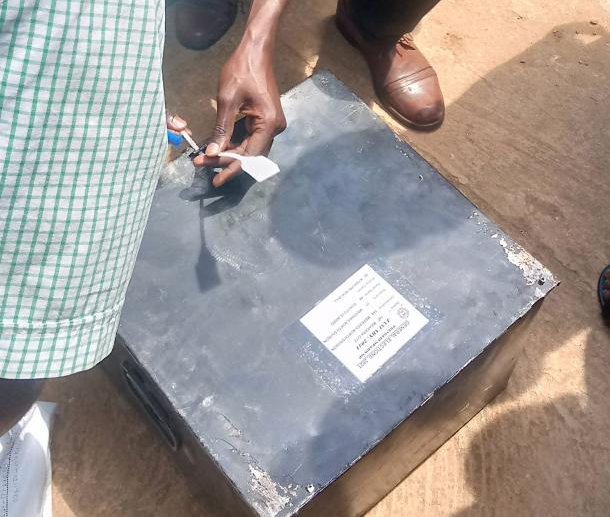 Some of the election ballots were delivered with broken seals

The Electoral Commission on Thursday delivered the materials for the presidential and parliamentary elections scheduled for January 14. The materials included ballot papers, polling register, declaration forms, the ink pad, indelible ink and pens among others.

However, the boxes had seals which were broken, raising suspicion amongst political party representatives and independent candidates. Each box was supposed to be sealed with two seals of different colours but more than 20 boxes had one seal or both seals broken.

Bright Muhumuza, a parliamentary candidate for Mbarara City North on National Unity Platform ticket said that the broken seals are suspicious and claimed that there were plans to rig the elections. He said that they will not sign the forms unless they have proof that the materials inside the boxes were not tampered with.

"And when we were opening, we found that some of the ballot boxes, their seals were broken. So we did not know exactly what was in the boxes and am telling you the plans to rig elections have started already and I don’t think we shall accept. I have asked my people not to accept because most of the seals were tampered with. Now they have invited us to witness, to witness what?" said Muhumuza.

Imamu Kagiiko, who represented Emmy Mbareebaki, the Mbarara City South parliamentary candidate said that the broken seals have left many unanswered questions especially on the number of materials delivered.

Violet Atuhurira, the returning officer Mbarara City, says that there is no cause for alarm. She says that the seals could have been destroyed while the materials were on transit. She, however, says that the broken seals were replaced in the presence of candidates and their representatives.

"We had issues of some broken seals which happens because of the way they are packed and the movements definitely some of those seals got broken. But the good thing is every box had two seals - the orange and white. You would find that one of the two is broken, so we kept on replacing the seals and we want to assure the public, we want to assure the voters and the candidates that these materials are going to be safe here. They are safe and they will go to the polling stations when they are sealed," Atuhurira said.

Manzi Munanura, a parliamentary candidate Mbarara City South, said he was disappointed with the EC for not informing the independent candidates to witness the delivery of the material. Mbarara City received 195 ballot boxes.

In Kanungu district, only one seal was found broken. The district returning officer Ferdinand Mulekezi said that the seals will be replaced in the presence of the candidates or their agents. The voting materials are for the 309 polling stations in 25 town councils and sub counties of the district.

If they accept them, that will be a gone case and a wastage of time. M7 is trying all means to come as a winner and put all who never voted for him in Jail.

This is the time we should all stand up and say no to unprotected materials.
Report to administrator
0 #2 Mbeho Achuc 2021-01-11 00:44
Quoting Rwatooro:

We all have to stand up and refuse materials with broken seals.

If they accept them, that will be a gone case and a wastage of time. M7 is trying all means to come as a winner and put all who never voted for him in Jail.

This is the time we should all stand up and say no to unprotected materials.

And no one ever ,will be found who did it !!
What a country of sleepy-heads !!!
Report to administrator