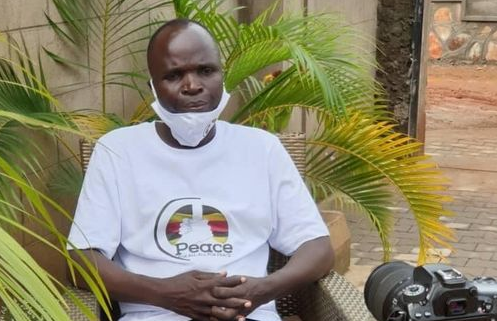 After a 2 hour interview at his home in Munyonyo, musician Ronald Mayinja has made off with The Observer news reporter, Yudaya Nangozi's mobile phone.
Mayinja first demanded that the audio recording be deleted, saying it was going to land him in trouble with the state. He took off and temporarily locked our reporter in his home, falsely claiming she'd trespassed into his home - never mind that he voluntarily agreed to the interview, directed our reporter into the home, sat and talked for 2 hours and 30 minutes.
He later changed his accusations, again falsely, claiming our reporter had taken photos of his naked children. He has since offered to buy our reporter a new mobile phone, saying he has permanently destroyed the old one together with its SD card and SIM card.
A case of phone theft SD: REF 29/7/1/2021 has been filed at Salama Road police station. Mayinja has been summoned to make a statement tomorrow at 10 am.
The Observer Media Ltd demands the immediate return of our reporter's mobile phone.

Like of recent and never before, they shamelessly and physically fight each other on the streets while on official duty sic enforcing the rule of law and order.
Report to administrator
0 #12 Wooden K. 2021-01-08 16:17
This report is incomplete.

The reason why Mayinja freaked out was he he told Yudaya Nangozi that " everyone knows that Bobi Wine is going to be the next president of Uganda " only to realize that this was recorded.

When he pleaded with her to delete it and failed , that was when the following , as reported, happened.

Some say that Mayinja needs mental help. But he is not the only one. Those who pay attention may have seen how Basajjabalaba behaved . The guy went bizarre.

Then there is Bajjo , its hard to tell what is going on in his head.

Even on higher level , one wonders if Beatrice Anywar , Beti Kamya and Florence Nakiwala are still what they were before they were injected with Papa Doc`s toxicants.

All these women do these days is to decorate predominantly themselves like bowerbirds.
Report to administrator
-1 #13 Kabayekka 2021-01-09 12:13
One thinks Mayinja is helplessly right. He made his music public.

He must not withdraw his statement infront of a beautiful lady journalist.
Report to administrator
0 #14 Nseka Mali 2021-01-11 10:36
And another black Ugandan thief!!

For how long will Ugandans put up with thieves ranging from those who take millions of dollars in bribes, downright theft of Uganda's loan money, to relief food and now mobile phones like Mayinja has done?????

Ugandans are at risk of being banned from some countries if nothing is done to the thieves!!!
Report to administrator
12