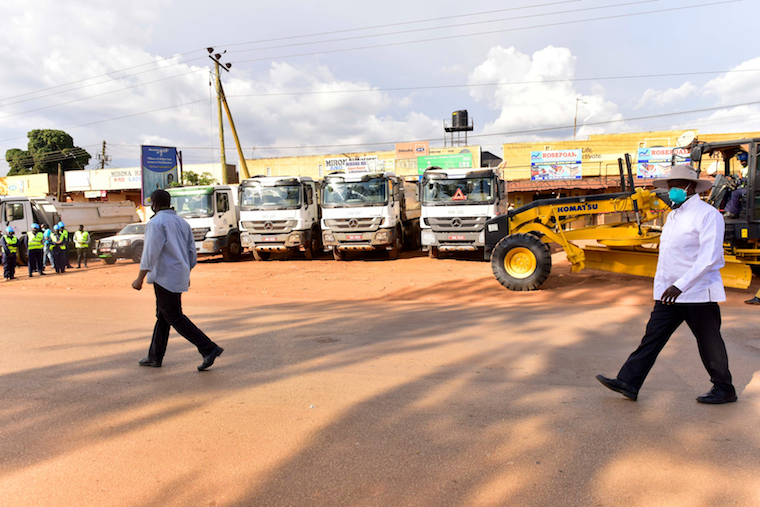 President Yoweri Kaguta Museveni has warned that his government has enough capacity to neutralise anybody who wants to destabilize Uganda during and after the January 14 general elections.

Speaking in Mityana district on where he had gone to attend a ground-breaking ceremony for the reconstruction works of Mityana-Mubende road and upgrading of Mityana town roads, Museveni called upon Ugandans to go out and vote for whoever they want to vote for without fear.

“I repeat, no one will destabilize Uganda, we shall not allow anybody to do that. Ugandans should go and vote in peace and decide your leaders because it's your constitutional right. Don’t fear anything, go and vote. If you want people to support you, convince them but don’t intimidate them,” said Museveni.

The president's comments come at a time when people are increasingly getting worried about a possible outbreak of election violence after next week’s elections.

On Wednesday, Robert Kyagulanyi Ssentamu, the National Unity Platform (NUP) presidential candidate sent his four children to the United States of America, claiming that they were a target for the regime. A section of commentators interpreted it as a warning shot of what might befall the country after the elections.

Speaking at the same function of launching the reconstruction work, the Bishop of Mityana Diocese, Rt. Rev James Bukomeko prayed for peace in the country during and after the elections.

“We pray for our country in this election season and COVID-19 pandemic that has left many scared of their lives,” said Bishop Bukomeko.

Even before the first ballot has been cast, more than 50 people have been killed and hundreds of others are still nursing wounds in hospitals after the election violence that followed the arrest of Kyagulanyi in November.

More than 1,000 mostly youths were also arrested and some have already been charged for allegedly participating in the chaos that lasted two days.

That is exactly what Uganda is; Museveni's private property that his family will inherite when he dies!
Report to administrator
0 #12 Akot 2021-01-09 20:50
Apollo, thanks.

What is more worrying is that Ugandans believe Museveni is immortal & will dictate/control every thing, so they won't be brought face to face with one another ever!

Ugandans, you do know that as long as you are alright with the tribalistic system, you are alone with Museveni, right?
Report to administrator
0 #13 Akot 2021-01-09 20:58
Rwatooro, understood, but,

Museveni will never hand over power peacefully as it's now his country & Ugandans are the migrants/refugees causing him trouble!

Who from which tribal land will Museveni hand over power to peacefully?

Is it not tribally divided & ruled Ugandans going to legalise Museveni through yet another fake election, instead of bringing down the tribalistic system & UNITING to block him?

Museveni needs the fake election, but do Ugandans need it?
Report to administrator
+3 #14 Henry Baisi 2021-01-10 12:23
Ugandans are brought up to "fear". As infants', we are taught to fear our parents, the authorities and god.

We must replace it with a culture of courage and confidence. We must find the courage and confidence to stand up to dictators just like Bobi Wine. As a people, we should follow that example to stand up to M7.....NOW.
Report to administrator
+2 #15 Zaitun 2021-01-10 17:49
Ugandans owe nothing to Museveni but, he owes us everything- destruction of the once peaceful country so that he plunders freely; bringing in foreigners to overpopulate the country at the exense of ugandans; his family members becoming billionaires in dollars at the expense of ugandans experiencing who can hardly afford a meal per day.

He owes an explination to Ugandans concerning the millions of innocent Ugandans just to crown himself the most blood-thirsty lion of frica!!!!
e are no longer impressed by your hollow words that mean nothing of value

Time is coming when you and your kindrends will regret why you were born and why you left your country to come and destroy Uganda!!!!!!
Report to administrator
+2 #16 kirya 2021-01-10 19:20
m7 you are doing it to Uganda torturing killing them in safe houses and looting the country dry.

Uganda is now your personal property the citizen have no rights as you turned them into beggars in their own land.
Report to administrator
12