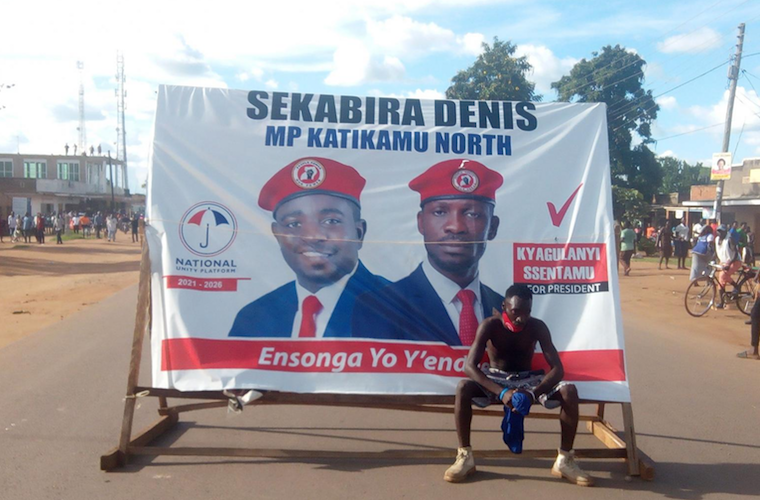 A Kyagulanyi supporter in Luweero

By flying out his four children, National Unity Platform presidential candidate Robert Kyagulanyi aka Bobi Wine has betrayed his so-called struggle and supporters who have sacrificed so much for him thus far, Foreign Affairs state minister Okello Oryem has said.

Kyagulanyi's nemesis Moses Ssali aka Bebe Cool, a sycophantic regime supporter posted on social media pictures of Kyagulanyi's four children at Entebbe airport and their itinerary details, sparking off a fierce debate over privacy breaches by the airport and airlines authorities, betrayal of other families and the constant risk opposition politicians and their families are exposed to.

Many have predicted election violence due to a determined opposition and electorate seeking to end incumbent President Museveni's 35-year in power. Museveni himself has severally warned of "crushing" and not allowing anybody to destabilise the country during and after the January 14 general elections. In November last year, over 60 people were killed when security shot at protestors who were demonstrating against Kyagulanyi's arrest in Luuka district.

Oryem says while it is not true that there are plans to harm Kyagulanyi and his family, the government will however not tolerate anything done outside the law. He adds that Kyagulanyi's true character has finally been exposed, where like the clever children's book character Mr. Hare, he has told Ugandans to throw their mother in the water, and yet for him he only threw a mortar and pestle.

Kyagulanyi, in a statement, said he has for long resisted calls from fellow opposition politicians including Mukono Municipality MP Betty Nambooze to take his family out of danger. He said his children for the last three years, have been living under constant fear most especially when grenades and other explosives were thrown at their bedroom and a surveillance drone flown at night over his home in Magere, Wakiso district. Kyagulanyi temporarily suspended campaigns in December last year when his convoy was directly fired at with multiple shots by the army during a trail in Jinja.

He also said some people in intelligence told him that the state had planned to kidnap his children or wife and use them as leverage to compel him to agree to certain conditions before or after elections. Read Kyagulanyi's full statement here.

This comes at a time when former Uganda boxing captain Isaac ‘Zebra Mando’ Ssenyange was shot dead nine times by 12 state security operatives last week after baulking out of plans to infiltrate Kyagulanyi's camp and deliberately start street fights to give chance to the army to 'intervene'.

Zebra feared that such a ploy would lead to the death of many innocent people. Kyagulanyi's head of personal security detail,  Eddie Mutwe and best friend, Nubian Li and other confidants are currently locked up in prison after they were remanded on allegations of assaulting police officers.

His personal driver, Yasin Kawuma was shot dead in August 2018 in Arua in northern Uganda during a parliamentary by-election. Last month, Kyagulanyi's personal bodyguard, Francis Senteza Kalibala aka Frank was knocked dead around Busega roundabout in Kampala allegedly by an army vehicle as Kyagulanyi and his team rushed journalist Ashraf Kasirye, who was in critical condition after being shot in the head in Masaka to get medication at Rubaga hospital.

A section of Kyagulanyi's supporters have reminded Museveni's supporters criticising his decision to fly out his family that Museveni too flew out his family first to Nairobi and then Sweden before he launched a 5-year guerilla war in which an estimated 500,000 people were killed despite the fact his family had not been threatened by the regime in power then and that Museveni even recruited children as known as kadogos as fighters.

Will just leave this here pic.twitter.com/Q4EW4E4k96

Government spokesperson Ofwono Opondo said that the National Resistance Movement government and its leadership has a long good track record of not harming or killing politicians, their families or its opponents.

“Remember Besigye and [David] Sejusa even fled Uganda claiming their were in danger. Besigye and Byanyima claimed that Besigye would be poisoned while in Luzira prison in 2006," Opondo said.

Opondo says that Kyagulanyi is lying about the risk his children were exposed to because he has been caught off guard yet he has been encouraging other people's relatives to get involved in violent riots and harm's way.

“To the contrary, it's Kyagulanyi who has been defiant throughout this election campaign including assaulting police officers on lawful duty and insulting whoever disagrees with him. NRM government and leadership has a long good track record of not harming or killing politicians, their families or opponents” Opondo added.

Meanwhile, Jacob Siminyu the Immigration spokesperson has refuted claims by Kyagulanyi that immigration officials had leaked the travel details of the children who are travelling to the USA. He says the people to answer are officials at Qatar Airlines and individuals who had access to those details.

Why is he fleeing even before he casts the ballot? And for some clowns here trying to despise patriotic Ugandans who share their opinions, I say shame on you. ...

Mama Nonsense, Kyagulanyi is not a coward like Gen Tibuhaburwa. Because you fanatically identify and defend our thug "Problem of Africa, Author and Master of Violence" Gen Mputu Tibuhaburwa; you have exposed yourself as one the million Ugandans he despises.

In other words, Gen Tibuhaburwa is popular among and easily relates and identifies with the useful idiots and fools, but whom he detests and despises because; they remind him of what he is made of.

Madam Small legs Alice Lakwena, we defeated you with your stones at Magamaga and you are still magamaga here? Jesus Christ of Nazaleth!!!
Report to administrator
-1 #32 Mama Mia 2021-01-08 15:19
Quoting rubangakene:

Just listen to the 'little twit'; when his father was "president", he was being sponsored in school in England by Asian businessmen who later abandoned them as soon as his father was overthrown.

He had to do "cheeyo" in Mcdonalds take-away restaurant. Think before you utter nonsense bwana tumbo!

Sasa wewe Rubangakene, you abuse mueshimiwa Oryem, what about you with a head which looks like a ntake loaf of bread and also snoring at night like a pig?

When did Museveni's children ever become anybody's business while he was fighting your father ,Tito traitor Okello?

And for the idiot Bebe whatever, those are minors you chose to endanger. Do you want pictures of your children and their whereabouts circulated in Uganda?

Ok, then walk the walk. Lets hear about your children in those terms and see how settled you will be. Again on Oryem...exactly how does Kyagulanyi's family concern of their safety translate to the concerns of a family in your village in Kitgum?

The statement reeks of stupidity. It should be shocking that a minister reasons here like a pig, but again how would one be shocked about any of Museveni's flock of cronies?

Who is unlawfully throwing Kyagulanyi in jail and abducting his body guards? And you expect him to have no fear about his children's safety? Okello, you are not smart at all.
Report to administrator
+1 #36 kabinda 2021-01-09 09:45
The way Opondo reasons, it is not surprising he was CAUGHT STEALING UNDERWEAR.

That Kyagulanyi assaults police officers could not be more idiotic a statement. Who is chasing the other..police or Kyagulanyi?

Even pigs know the answer to that. And you talk of NRM not harming opponents,etc.

Opondo,you must be wearing stolen earphones and blinders not to know the atrocities your corrupt regime is doing. Guess what your time will come to face the music .Its a matter of time.
Report to administrator
0 #37 Henry Baisi 2021-01-09 09:49
Okello Oryem, Bazilio OLara Okello, Tito Okello, Olara Otunnu are the idiots who brought us to where we are for those who do not know the history.

The sight of Okello Oryem reminds me of his idiotic father and my family butchered by his soldiers to usher in the Fundamental Change.
Report to administrator
0 #38 Kabayekka 2021-01-09 12:48
Indeed the Northners and it seems the Westerners are very warrior- like African tribesmen.

The vulnerable need to be protected!
Report to administrator
1234