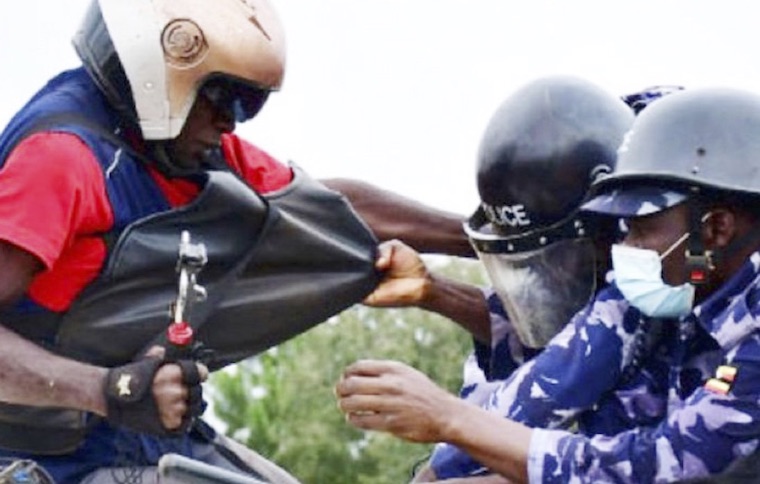 As campaigning for the forthcoming presidential elections enter a critical phase, several journalists are counting the cost of the campaign trail.

If one has not been intimidated or arrested, they have consumed of teargas while others have endured the wrath brutality from security operative to the point of near death. BAKER BATTE LULE chronicles the stern tests journalists have been through right from nomination of presidential candidates.

Ugandan journalism is undergoing a stern test in this election campaign period. weeks since the nomination of candidates on November 3, the journalism fraternity has been attacked severally, mostly by security agents.

Their crime is often exposing the brutality meted out on leading opposition figures, particularly Robert ‘Bobi Wine’ Kyagulanyi and Patrick Amuriat. A November 27 incident in Masaka left several journalists injured while Ashraf Kasirye, a Ghetto TV reporter, remains in intensive care after he was shot with a teargas canister to the head.

Derrick Wandera, a Daily Monitor journalist, says it is challenging to cover Bobi Wine’s campaign trail. He says every morning when he leaves home to go and report on the trail, he is not sure of whether he will return home in one shape.

“Most of the times we are on the side of the police in order not to be targeted for teargas and bullets which have come to characterize the campaign. But sometimes they turn against us for documenting their actions against Bobi Wine supporters,” he says.

“Some even call us activists simply because we are doing our job. I want to tell the security that we trained to be journalists; so, they should allow us to do our job as they do theirs. Journalism is not a crime.”

Ali Mivule, a reporter with NTV Uganda who was injured in the November 27 incident while he was covering a standoff between Bobi Wine and the police in Masaka, said it is unfair to make a blanket accusation that the security deliberately attacks journalists every day.

He, however, adds that there are times when they are deliberately attacked.

“Sometimes we are injured in the fracas as security tries to disperse Kyagulanyi supporters but in the case of Masaka, that officer called Abaine deliberately aimed at us for recording the footage,” he says.

For Jonan Atusingwize, a reporter with Pearl FM, every evening that he returns from the trail unhurt is miracle.

“I have covered campaigns before but I have never seen something like this. Sometimes the security fires teargas or bullets indiscriminately without regard to anybody. We thank God that we are still alive and unhurt,” he says.

However, government and security agencies have always complained about political activists who hide behind journalism to do political work. For instance, Kyagulanyi’s campaign is followed by a large pool of bloggers who stream live his campaign meetings.

“Sometimes, some of them purposely provoke security by getting involved in heated verbal or physical exchanges with police,” said a police officer on the campaign trail who prefers anonymity because he is not authorized to speak for the force.

“The police are also people like everyone and these confrontations have been the leading causes of chaos associated with the Bobi Wine campaign team,” he says.

“Teargas was used to quell the violence and journalists were regrettably caught up during the Masaka incident,” he says. “The police Media Crimes department is investigating all circumstances in which the journalists were injured and a report will be out soon.”

The African Centre for Media Excellence (ACME) has documented a dozen incidents of attacks on journalists doing their work and the most conspicuous aspect is that the brutality is getting worse as stakes rise.

“The increasingly brazen and arbitrary clampdown on independent journalism and civic space in the run-up to the general elections is a cause of serious concern,” reads part of the statement by Dr Peter Mwesige, the ACME executive director.

“These infringements on media and civic space do not augur well for peaceful elections and the general stability of the country. We demand that the government upholds and respects the roles and rights of all citizens and stakeholders in this election.”

To show their disgust at the treatment of security forces, journalists on Tuesday walked away from a security press briefing in protest to the beatings and shootings inflicted on members of the media covering election campaigns.

Meanwhile, it is worth noting that whereas journalists have witnessed an unprecedented attack; it is the public that has borne the biggest brunt of brutality. For instance, the chain of events from last weekend culminated with the death of a Bobi Wine bodyguard Frank Ssenteza in Busega, whom his supporters allege was crushed by an army truck.

Several others such as the head of his security Wilfred Kato Kubai, have been forced off the campaign trail while others like his bodyguard Norbert Ariho and Ahmad Kibirige have been arrested several times.

November 3: Vision Group journalist Ronald Kakooza was arrested while covering events at the Forum for Democratic Change headquarters in Najjanankumbi in a build-up to the nomination of the party’s candidate, Patrick Amuriat, who was also roughed up.

November 3: Journalists from different media houses covering a procession by Kyagulanyi’s supporters were pepper-sprayed in Nakawa en route to the nomination grounds in Kyambogo, Kampala.

November 5: Freelance journalist Moses Bwayo was shot in the face with a rubber bullet while filming NUP’s Kyagulanyi, who was heading to the party headquarters in Kamwokya.

November 12: NBS TV team led by reporter Daniel Lutaaya and cameraman Thomas Kitimbo was attacked by unknown people in Lira where they were covering the campaign of Kyagulanyi. Their property, including a laptop, camera chargers, and phones, was stolen while the branded vehicle they were travelling in was vandalised.

November 18: Ashraf Kasirye, a Radio One journalist and Ghetto Tv cameraman, was beaten and pepper-sprayed by police while he was covering the Bobi Wine arrest.

November 18: Sam Balikowa of City FM and Nile TV in Jinja arrested while covering the arrest of Bobi Wine

November 18: John Bosco Mwesigwa was sacked from his job at City FM on accusations of writing pro-opposition stories.

November 27: Government deports three CBC News journalists who were in the country to cover events leading up to the 2021 general election.

December 10: The Media Council of Uganda (MCU) directs all practising journalists in Uganda to register for accreditation or risk losing the right to cover the 2021 elections and other official events.

December 15: UCC asks Google to close at least 14 YouTube channels for allegedly mobilising riots that resulted in the death of more than 50 people and left several injured in November.

These are Bandits Who took to the Bush claiming to have Been rigged out Power By Late Obote!!

Today they Are WORSE than Those they used to Call Swines !!How can you Justify Torture and Killings without Trial of Innocent Civilians Calling them Rioters or Hooligans!!

Where are The Courts of LAW!! It is Only in Uganda that ONE is Termed Guilty before being arraigned before a Judge!!

Young Men and Women are being held Incommunicado in Military Barracks and Safe Houses being Tortured Mercilessly !!Prayers seem not to Help! Satan is at His Ease..Only Fire will Quench his Killing Thirst ..
Report to administrator
+2 #2 Juwait kali 2021-01-02 05:57
Really serious questions should be asked where we have been heading during the last 20 years or so.

Even money eaters/aka MPs should really take note. Everyone is going to be affected. At 75 years kasirye gwanga was seen as a threat?
Report to administrator
-2 #3 Akot 2021-01-02 18:00
Kalibbala, thanks, Happy New Year to you!

Ugandans MUST stop Museveni in UNITY & not let him lead them to yet another fake election no other than him will declare winner!

Ugandans should by now know that as long as they maintain the tribalistic systrem, developed world will watch in silence as non of their politicians will risk his post by supporting tribalists Ugandans!

Look at how USA Republican law makers have turned backs on D. Trump & choce to respect their democracy!

Ugandans MUST bring down the tribalistic system & this comes FIRST, if they want help from developed countries, ICC!

UK is Independent Country now & MUST revive the Commonwealth of Nations & FREE Uganda will be partner in business!
Report to administrator
-2 #4 Akot 2021-01-02 18:09
Juwait kali, thanks.

This is why Ugandans MUST NOT go for the next fake election that will only legalise Museveni!

All that is needed, if Ugandans really don't want Museveni any more, are;

- bringing down the tribalistic system, &

BLOCK Museveni & leave him on other option but to leave & be arrested immediately so that he doesn't live with stolem only peacefully as Amin did!

If Ugandans legalise Museveni for another 5 years, at the end, he will be too old to be brought to justice & get away with killing Ugandans, tribally dividing them & making them ensmies of one another with no chance of a future!

Museveni MUST be stopped before he dies & leave Ugandans in the tribalistic system!
Report to administrator
-2 #5 Akot 2021-01-02 18:29
No normal people would go for election organised, controlled, run by a demon ruler in power for 35 years!

No real opposition candidates wourd put a people at risk by going for fake elections run by a demon in post for 35 years!

But people just UNITE, come out to block the demon, as this is the only way that gives chance to help from developed world - UNITY for common purpose against common enemy!

Uganda so called opposition candidates MUST STOP leadin Ugandans into a trap with another fake election that will ensure Museveni's 40 years in power!

All Ugandans need are, saying NO to the tribalsitic system & UNITY!

Mps, tribal leaders are enjoying the inhuman show in silence, so which outsider will help Ugandans if they don't UNITE?
Report to administrator