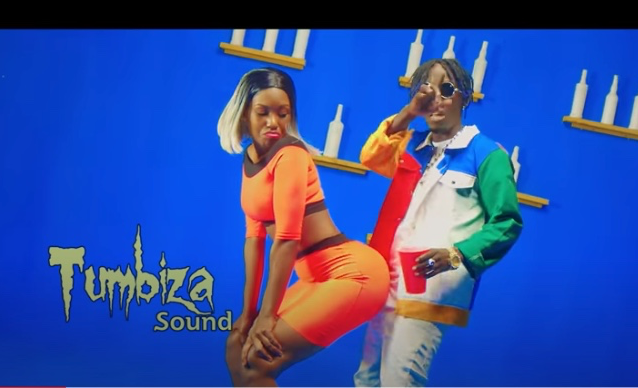 A screen grab of the Tumbiza song

The ministry of Health has asked the Uganda Communications Commission (UCC) to ban the broadcast of a popular song, Tumbiza Sound by Eric Opoka aka EeZzy.

In a letter addressed to the executive director of UCC, Irene Sewankambo, the ministry says the song be banned because it misinforms the public about COVID-19.

The song paints the picture that while some people are still in the lockdown, in other parts of the country life is back to normal because people have stopped adhering to the guidelines. In the song, Opoka promotes the idea of bars reopening and that revellers will use sanitizers, wear face masks and will social distance while in the bars to protect themselves.

The song further claims that partygoers are no longer scared of COVID-19 and in any case, the police is not there to enforce the standard operating guidelines because they have allies therein.

Dr Henry Mwebesa, the director-general of health services says that they want the song to be banned because it promotes complacency among members of the public.

"It has been noted with concern that there is a song being broadcasted on electronic and social media with messages contradicting the ministry of Health standard operating procedures on COVID-19. The message in the song has, in turn, caused misinformation among different audiences and subsequently creating complacency among the public," Mwebesa said.

The ministry now wants the song banned on all electronic and social media sites such as Youtube. The song which was released in September this year has over nearly 600,000 views on YouTube and more than 1,000 comments.

The ministry’s move to have the song banned comes at a time when the number of COVID-19 cases in the country is increasing. To date, the number of confirmed coronavirus cases stands at over 30,000 with more than 230 deaths.

A few days ago, the permanent secretary, Dr Diana Atwine and the minister of Health Dr Jane Ruth Aceng started a campaign asking people in towns not to travel to villages to curb the spread of COVID-19.

This week, doctors under the Uganda Medical Association have since re-echoed their message and have gone as far as asking the government to institute another lockdown to curb further spread of the virus.

+2 #1 WADADA rogers 2020-12-19 09:40
I dont know what is wrong with this country, leaders tend to focus attention on things that dont matter and leave those that are so pertinent.

So what if the song is talking about bars that are not yet open, why should the song bother any one as if it- the song is going to open bars to the general public.
Report to administrator
-4 #2 Wainanchi 2020-12-19 11:36
Without listening to the song and reading about Doggily dog satanic music by which he wants to disseminate music and stir SUBCULTURE which.

by his propagandists will stir negative feelings and emotions with listeners soevially the young ones since wording.and music are soevially coded and designed by Lucifer,s children, or children of Satan, are directed towards the young rebellious audience to boost anti-government,anti.

UPDF feelings and incite remorse and rebellion.BAN DESTRUCTIVE MUDIC NOW!!!!!
Report to administrator
0 #3 Mike larry 2020-12-19 11:38
Freedom of speech. If you're stupid enough to be influenced by a song or movie, then you deserve the consequences.

UCC once again will overreach their mandate. Where is Father Lokodo by the way? His silence is deafening.
Report to administrator
+1 #4 Akao 2020-12-19 16:55
Quoting WADADA rogers:

I dont know what is wrong with this country, leaders tend to focus attention on things that dont matter and leave those that are so pertinent..

I agree, because there is no leaders in Uganda, the one that arw put there are just filling the seat but with empty heads.

I thought the song was stating that there was no covid 19 or it was encouraging people not to use SOPs.
Report to administrator
0 #5 Zaitun 2020-12-19 19:57
Those in power got drowned in becoming rich to the disadvantage of innocent Ugandans as they were becoming masters of evil doing.

It is even unfortunate that our News Papers do not inform Ugandans when foreign papers write what is happening with our bogus leaders.

Are Ugandans aware that African leaders earned 17 billion dollars as handshake to import Covid19 virus to pave way for western occupation of the continent according to WHO secretary general?

Have you asked yourselves : How come there were almost no deaths in Africa during the first phase of Covid19 but why this time around?

Could our journalists have been bought by our leaders to let that information slip away as if nothing happened?

Wake up Ugandans. We have "TRAITORS" here who would like us believe everything is fine!
Nothing is fine and good in our Uganda of today!!!
We stand to become either SLAVES or LANDLESS people of tomorrow!!
Report to administrator
+1 #6 Juwait kali 2020-12-19 21:51
WANAINCHI nkusekeredde you are dreaming of bobi wine every second nawawooo.

They are other candidates in this selection you know. This song has nothing to do with him sir.

In any case pipo pour is hour pawa n hawa pawa his pple power. NEERA NEERA NEERA JOANA GIVE ME HOPE. NUP OYEEEE + KYAGULANYI.
Report to administrator
+2 #7 Kabinda 2020-12-20 15:13
When you call for a ban on anything, you must have evidence it is dangerous.

Do they have any data to suggest the song has done any of what they claim or are they simply speculating, or even merely unhappy with the lyrics?

Spineless clowns moaning the message of the song seem to forget Uganda is in a totalitarian regime lockdown for several years already.

What can you do in Uganda without General Museveni and his teargas police approval ?Stop pretending the song will do anything.

Kaguta said he cannot allow Besigye and others to take his Uganda,right?It is his. He plans to go to the grave with it. Relax.

The song is a mere exercise of satire. You want to police even art and the expression of human intuition or creativity? It will break no bones. How can you love oppression that much?
Report to administrator