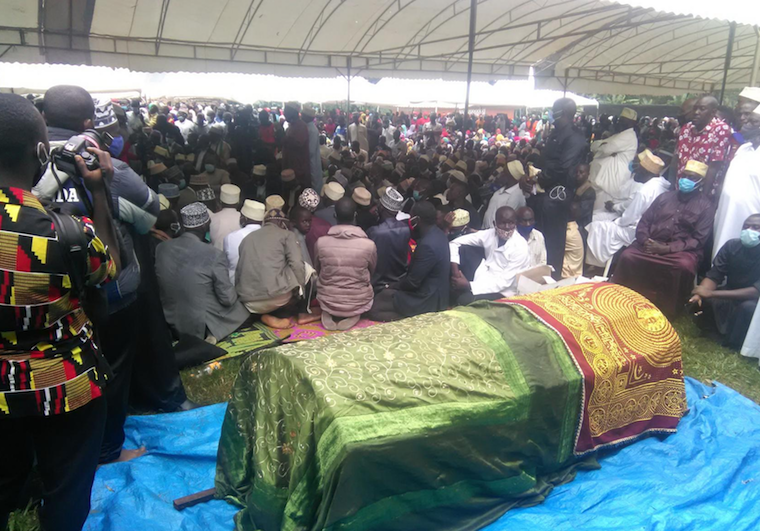 Mourners who turned up for the burial of fallen Sheik Nuhu Muzaata Batte blocked the minister of State for the Disabled and Elderly, Sarah Kanyike from addressing them.

Muzaata who passed away on Friday at the International Hospital Kampala (IHK) was buried today Saturday at Kigogwa village of Gombe division in Nansana municipality, Wakiso district. As soon as the master of ceremonies announced that minister Kanyike was the next on the agenda to address the mourners, they booed and heckled until when the MC announced that the former deputy mayor for Kampala City Council Authority (KCCA) had been scrapped off the speeches list.

Thousands of people who were later joined by National Unity Platform (NUP) presidential candidate Robert Kyagulanyi Ssentamu aka Bobi Wine braved the heavy downpour to send off Muzaata who was heading the religious affairs (Daawa) department at Kibuli Muslim headquarters.

Kyagulanyi said Muzaata's death still remains shrouded in mystery - further propagating social media speculations that he'd been poisoned.  Government footed all the medical bills amounting to over Shs 70m spent on Muzaata and offered another Shs 20m to help with the burial arrangements. Muzaata was praised by all the people who addressed the mourners referring to him as a trustworthy man who could not easily be swayed by bribes or threats.

Kawempe North MP Latif Sebaggala told the mourners that Muzaata was a good adviser to the Parliamentary Muslim Forum and among the things he was keen on; was the introduction of Islamic banking which he said was a fairer banking system because unlike the existing conventional banking system, it prohibits charging and paying interest.

Hassan Magoba a family member says that in addition to being a trustworthy person, Muzaata was good at uniting his family members and it will take longer to get his replacement. Magoba said Muzaata was always remorseful and quick to recognize his wrongs and ask for forgiveness. Ibrahim Musa Mayanja his former student says that Muzaata was not only a good teacher but also a good preacher whenever he took to the pulpit to preach about the Islamic faith.

+1 #1 WADADA rogers 2020-12-05 23:28
I think the Government should stop sending representatives to such functions as they have lost all popularity and many risk loosing their parliamentary seats due to associations with Museveni.
Report to administrator
+1 #2 Kabayekka 2020-12-06 07:50
Was this official going to stop the ceremony not to continue just because of COVID19?

Indeed the hecklers had a point as they wanted to bury their dead with a very big crowd!
Report to administrator
+1 #3 Ainebyana 2020-12-06 12:17
Sarah Kanyike stabbed Erias Lujwago in the back. Can she therefore be trusted by trustworthy people?!?!

I doubt it very very much so.
Report to administrator