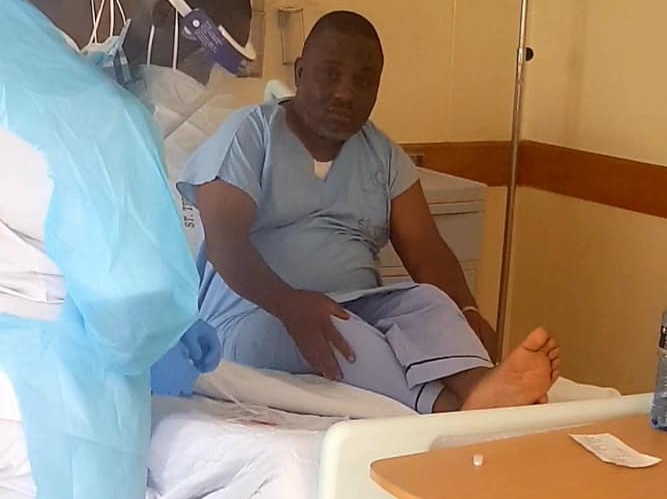 Contrary to rumours of his demise, Kampala lord mayor Erias Lukwago is in stable condition and has been discharged from hospital in Nairobi, Keny where he's been admitted for the last two weeks.

According to the deputy lord mayor Doreen Nyanjura, Lukwago was discharged today morning and is expected back in Uganda on Monday, December 7. Elvis Kintu Nsonyi, the lord mayor political assistant also dismissed rumors about Lukwago saying that he was recovering and in good state.

“I have just talked to the lord mayor, he is recovering and in good state, so treat any news being circulated as false and with the ultimate contempt it deserves,” said Kintu.

Lukwago was last month admitted at Nairobi hospital after being diagnosed with acute anaphylaxis which became persistent on treatment.

Anaphylaxis is a severe allergic reaction to some foods, insect stings, medications and others. It causes the immune system to overreact to the allergen by releasing chemicals and can cause one to go into shock, sudden blood pressure drop, and blockage in breath.

Three days ago, the office of the lord mayor issued a statement saying that Lukwago has registered tremendous improvement following an intensive and comprehensive medical management.

Lukwago’s discharge confirmation follows a report about two people who earlier on fainted at the burial of Sheik Nuhu Muzaata at Kigogwa village in Gombe division of Nansana municipality in Wakiso district following romours indicating that he had also passed on.

Ugandans are preparing to go for yet another fake election to legalise another 5 years for the same demon who destroyed them, owns their country & tax money!

Just bringing down the tribalistic system & UNITY are all Ugandans need to block & show Museveni way out!

Why constitutionalalise Museveni for another 5 years?

Have Ugandans already counted votes & know how many Museveni will get & how many +3 opposition candidates will!

Which opposition candidate will cry out "election was rigged" because it was him & not Museveni or the other opposing candidated, who won?

Why don't Ugandans see it's them keeping Museveni in post at all cost & to their complete destruction?
Report to administrator
0 #12 Akot 2020-12-06 17:26
Quoting Mutebi:

Either the facilities are not there (mind you we have New Mulago Hospital) or even our political elite do not trust our health system.
Very sad indeed.

Why are Ugandans going to yet legalise Museveni to ensure his 40 years in power, instead of ending his rule in UNITY, then go for the kind of governance they want?

Say, if Museveni drops dead, will Ugandans go along with his military son waiting/prepared to take the dad's place & the family business goes on?

Why do Ugandans act as if the country formed by their tribal lands began & should end with Museveni & family?
Report to administrator
0 #13 Lakwena 2020-12-06 17:28
Quoting Larry Mike:

@ Akoa. But we get immunized, everyone gets free quality primary and secondary education, a few highways have been constructed, we are middle class income, we have Mulago hospital, a very beautiful international airport, a very professional police force and national army. Honestly, what more do you want?

But Larry Mike, remember that a hungry puppy cannot play happily when the milk is in another puppy.

In other words, the International airport is only beautiful to those who use it.

And the police is only professional to those who command it, but brutal to those they thrush and teargas and;/or murder.
Report to administrator
0 #14 Akot 2020-12-06 17:47
Lakwena, thanks!

Not to forget that be'ing mayor of the Capital, Erias Lukwago is the only National Leader Ugandans have!

Can Ugandans imagine what the situation would be if Bobi Wine calls tribal leaders to stand down & to UNITY?

Would this not isolate those supporting Museveni & make it clear who is winner, without Ugandans killed for another fake election organised/controlled by Museveni?

Why are so called tribal leaders quiet, unconcerned about killings of Ugandans, is it because they are afraid of Museveni or what goes on is happening in foreign land & not in peaceful Uganda in which they are tribal leaders?

Just bringing down the tribalistic system & UNITY are all Ugandans need, if they want Museveni & family out, then go for the kind of governance they want!

Certainly it's not going for yet another fake election that will bring another as it will only legalise, officialise, constitutionalise Museveni!

+1 opposition candidates is blessing for Museveni as they further divide an already tribally divided & ruled Ugandans!

Which opposition candidate will come out to contest the rigged election & with how many voters around him?

Will tribal leaders come out to contest result of the fake election & which opposing candidates will they go for, when they are in posts given to them by Museveni, their chief?

While waiting for Ugandans to bring down the tribalistic system & UNITING; USA, EU, UK, UN, ICC... will continue to watch in silence!
Report to administrator
0 #16 Akao 2020-12-06 18:34
Many of you are just ignorant. You can treat that condition in Uganda.

But there are several reasons why someone like, say, Lukwago would go to a Kenyan hospital instead of Nakasero.[/quote

Kalemera, pardon my igronace, but there was a story recently on monitor based on intensive investigation about new mulago hospital.

Its just a structure with no resources, you can't run a hospital like that and expect to treat someone with severe anaphalaxis.

I work in a world class hospital, so i know what anapylaxsis is and how its treated
Report to administrator
0 #17 Akao 2020-12-06 18:46
Larry Mike, we need a functional system. Hospitals that have resources, education system that educate children equally.

Preventative health care that is not donor founded. Physical development that is based on equity through out the country.