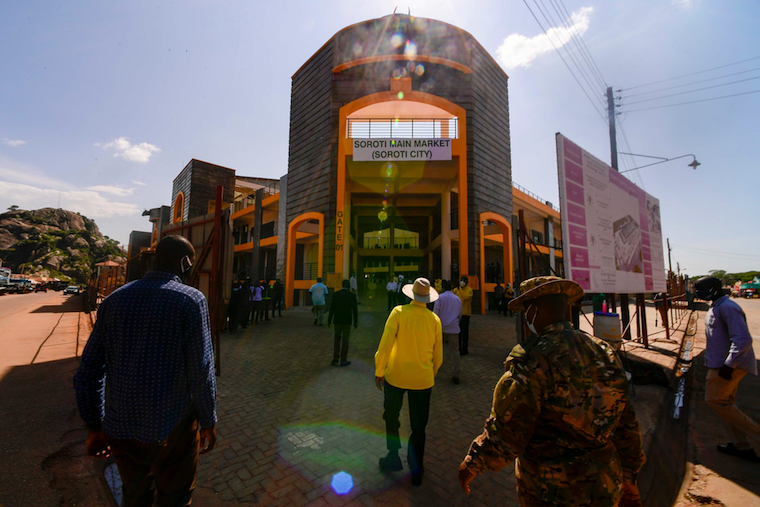 Incumbent presidential candidate Yoweri Museveni has spent much of his first 21 days on the campaign trail launching roads, markets and hotels.

On November 9, the incumbent officially kicked off his re-election campaign for a sixth term of office at Kawumu in the central district of Luweero and later moved to Lango West Nile and Acholi sub-region and trooped into Karamoja sub region on November 18 where he commissioned several infrastructure projects.

Museveni officially opened the newly constructed Hotel Africana in Moroto on November 20, the very first multi-billion hotel in the area. Museveni said the hotel will attract more tourists to the area and pledged a tax exemption for the hotel owner. The approximately Shs 29 billion hotel was constructed partly using a loan from Uganda Development Bank.

It has 70 rooms, two restaurants, board rooms, conference halls and a fully-fledged commercial kitchen. On November 21, the president commissioned the National Backbone Infrastructure (NBI) Phase IV Project in Moroto, which he said will connect Karamoja to the rest of the world through internet.

He said the project will reduce internet costs and ensure that all government services are online. The project was funded by the World Bank and set up by Huawei Technologies under the National Information Technology Authority-Ugandan (NITA-U). That same day, Museveni also commissioned the 150.3 kilometer newly tarmacked Soroti–Moroto road, fully funded by the Ugandan government.

He said the road will reduce travel time between Soroti and Moroto and spur development in Karamoja. He also broke ground for the upgrade of Soroti-Lokinyatara road. After commissioning all these projects in the Karamoja sub-region, Museveni taunted the opposition in a tweet, “I feel embarrassed on behalf of the opposition.

"I was in Karamoja sub-region, opened a good hotel, commissioned the road from Soroti to Moroto and the internet linking Moroto to New York by underground cable. I feel sorry that people are there talking but not appreciating facts.”

On November 21, Museveni and his campaign team trooped into Teso sub-region and while there, he commissioned the Soroti Main Market. The new market has 1,390 facilities including stalls and retail stores accommodating over 2,000 vendors. Constructed using a loan from the African Development Bank, the market building has banks, restaurants, medical facilities, child daycare space, underground water-harvesting facility, office space and is expected to create about 3,000 jobs for Soroti residents.

Sino Mbale industrial park sits on 619 acres and hosts over 80 factories and will employ 15,000 people directly. On November 26, Museveni pre- sided at the groundbreaking event for the upgrade of the 92 kilometer Muyembe-Nakapiririti road, which will link Uganda to Kenya, South Sudan and Ethiopia.

He said for the road to make meaning, they must emphasize regional integration largely to engage in lucrative trade and easy movement of goods and services from country to country.

But the question is;

Why are Ugandans not ending Museveni's rule, the man they were so kind to give shelter to, yet has tribally divided & will rule them for life?

Do Ugandans know what they will do when Museveni dies leaving them enemies of one another & without common goals as a people?

Complaining, blaming Museveni won't kick him out of office, right?

Museveni himself, in power since 1986, is at pains to articulate why he is still the answer. Instead, the stories and images out of Uganda are those of his rivals, their supporters, or bystanders, choking on tear gas, or bloodied, dying, or already dead, and their mutilated body parts strewn on roads.

The general impression is of a state of blood and terror reigning in Uganda. And a clash between forces of change and a blood thirsty despot for 34 years determined to kill and maim so as to cling to power.

The most disturbinging is that Ugandans are going to legalise Museveni through yet another fake election in which he alone, has right to campaign!

men, women, children choking on clouds of tear gas, or bloodied and dying on the dirt roads strewn with severed body parts and gun-totting men look on indifferently (in some cases standing over their victims as they bleed to death) only leads to one conclusion - that human life has no value in Museveni's Uganda.

Even more troubling is the fact that the gunmen killing the rest of Ugandans appear to be exclusively from Mr. Museveni's tribe and their western Uganda kinsmen.

The latter fact portends a dangerous future for the country especially after the Museveni years and how this may happen.

Tribal leaders have obligation, responsibility to say NO to the tribalistic system to give chance to UNITY, so that Ugandans don't kill one another when Museveni is no more!
Report to administrator
0 #14 Akot 2020-12-02 18:04
So, Museveni is the only real Ugandan who has right to campaign on every tribal land?

How do +1 opposition candidates expect to replace Museveni when they are not allowed to campaign?

Who controls every institution in Uganda & who controls votes counting & result?

Will opposing candidates cry out "election was rigged" & which of them will say he's the winner?

Ugandans is under military dictatorship & only being ONE PEOPLE, can bring change; UNITY & blocking Museveni! then his army/police will either have to; go with him to his tribal land or apoligyse & become Ugandans' secuity bodies!

Ugandans cannot afford to go for yet another fake election that will legalise Museveni & assure his 40 years in power!

How much will bringing down the tribalistic system & UNITY cost Ugandans, other than ensuring Museveni is out & them FREE to do as they wish?
Report to administrator
0 #15 Juwait kali 2020-12-02 21:00
MIKI why would a Government with such a strong army care?
Report to administrator
0 #16 Miki 2020-12-02 22:45
Juwait Kali, the most ominous development is that many angry, desperate Ugandans (more so the youth), are increasingly overcoming their fear of Museveni and his gun men.

A fearful citizenry is always the dictator's biggest weapon, and Museveni seems to be losing this faster than he is aging.

Many of these youth were uprooted from the land, got some schooling with no meaningful education or even skills, and find themselves in the shanty towns from where they face a dire existence, see/suffer injustice and humiliation from the rulers everyday, with yet many not seeing any benefit in accepting life under a Museveni checkered legal regime.

These angry people shone of their fears. They are ticking bombs waiting to explode any instant. The day that explosion will happen, even Museveni's much vaunted gunmen may not be able to put out the firestorm. all indications at that Uganda is teetering towards a very uncertain future.
Report to administrator
0 #17 Miki 2020-12-02 23:48
Juwait Kali, historians will be puzzled as to why Museveni opted for terror and murder when there are still other alternatives that don't consign him and his legacy to the league of Uganda's past 'swine regimes' he so reviled at one time.

Compared to all his rivals, still has a better chance of winning. He is the incumbent with all the advantages this bestows on him, has the only truly national political campaign albeit one oiled by graft and commandeered national resources at his disposal, and he has that corrupt electoral commission that pays fealty only to him.

Museveni also has a track-record to run on, although increasingly a tired one, he still has a sizeable portion of the population that still believe in him, and may be a few more advantages.

But for Museveni this a road not taken. The are many reasons why this is so. May be he is convinced that terrorizing and scaring off any opponents is the only way to ensure his planned succession choice. Certainly a miscalculation.
Report to administrator
+2 #18 Wainanchi 2020-12-03 22:53
Don't want to read hate and malice comments.

Main reason is that they never endorse or talk nicely about advanced and progress Uganda is making.

Most of haters comments is on destruction and negation of all good things.

Therefore ,the forum is open to blabla losers and haters who are just waisting our and their time
Again and again, I shout slogans of support to the the old and future president of the Republic of Uganda our Good and Noble Man Yoweri Kaguta Museveni.

Neera Neera Neera Mzee YKM.We the people if Uganda want you to continue to lead us and we reject any other candidates.Museveni oyeeeeeee!? NRM oyeeeeee.Uganda oyeeeeeee!!
Report to administrator
0 #19 Lakwena 2020-12-04 14:08
Quoting Miki:

Juwait Kali, historians will be puzzled as to why Museveni opted for terror and murder when there are still other alternatives that don't consign him and his legacy to the league of Uganda's past 'swine regimes' he so reviled at one time.

Compared to all his rivals, still has a better chance of winning. ...

Miki, Gen Tibuhaburwa is now raving like Biblical Saul when he lost favor with God and the people.

To Saul's surprise little known David the Ghetto kid around the block; armed only with a sling short, floored Goliath the Philistine's giant.

In other words Miki, since dictatorship is a crime; all dictators, their family members and cronies are materialists and thieves.
Report to administrator
0 #20 Lakwena 2020-12-04 14:12
The current "state terrorism" being exacted on the opposition/innocent Ugandans on the streets, especially that of 18-19th Nov 2020; is an act of desperation, to shock, mask and shoo off Ugandans from suddenly discovering the skeletons in the First Family's Closet.

E.g., when dictator Ferdinand Marco was deposed in 1986, his wife Imelda Marco had 1,000 pairs of shoes. For what? only the Devil can answer.

In other words, after 35 years as First Lady; it is anybody's guess e.g., how many straws hats and pairs of shoes, Janet Kataha Tibuhaburwa now has has.
Report to administrator
12