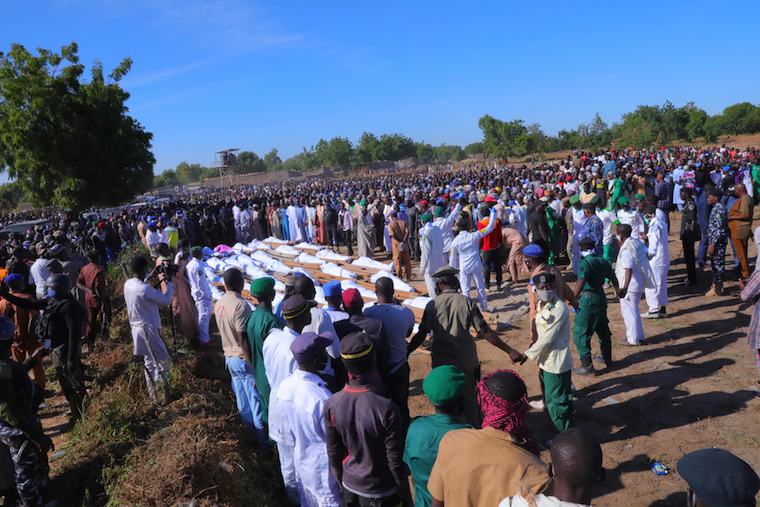 People attend a funeral for those killed by suspected Boko Haram militants in Zaabarmar, Nigeria, November 29, 2020

At least 110 people are feared dead in a weekend attack on farmers in the northeast part of Nigeria blamed on Islamic jihadists that are active in the area.

United Nations humanitarian coordinator for the African country, Edward Kallon, said in a statement he was "outraged and horrified by the gruesome attack against civilians" in the village of Koshobe near Borno State capital Maiduguri.

"At least 110 civilians were ruthlessly killed, and many others were wounded in this attack," Kallon said, adding that it was the most violent attack on innocent civilians this year. He called “for the perpetrators of this heinous and senseless act to be brought to justice."

Guterres extended “his deepest condolences to the families of the deceased and to the people of Nigeria,” Stéphane Dujarric said in the statement, wishing “a swift recovery to the injured and calls for the immediate and safe return of the abductees and those still reported missing.”

Guterres reaffirmed the UN commitment “to support the Government of Nigeria in its fight against terrorism and violent extremism and in its response to pressing humanitarian needs in the northeast of the country.”

Nigerian President Muhammadu Buhari issued statement condemning the killings, in which he also said that “the entire country is hurt by these senseless killings.” Buhari said the government had equipped the armed forces with everything needed “to take all necessary steps to protect the country’s population and its territory.”

Although, there is no group to have claimed the responsibility for the weekend massacre on Nigerian farmers, such attacks have been carried out in the past by Boko Haram or the Islamic State West Africa Province, which are both active in northeast Nigeria, where Islamic jihadists have killed at least 30,000 people.

0 #1 rubangakene 2020-12-01 13:56
When it happens in Nigeria, the UN becomes very "noisy" but when killings happen in Uganda at the hands of police, their silence is "deafening". Double standards.
Report to administrator