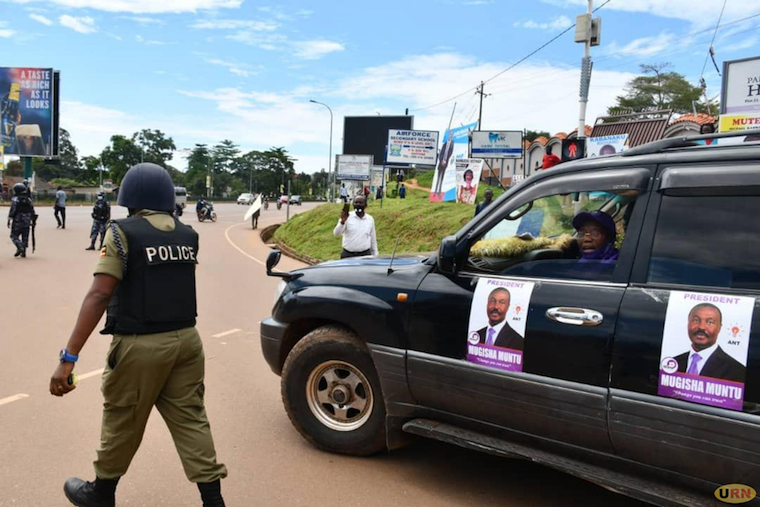 Muntu was expected to traverse Entebbe municipality, Busiro South and Makindye-Ssabagabo, and then proceed to Nansana and other parts of the district. However, when Muntu's convoy arrived at Katabi traffic lights, heading for Nakiwogo and other areas, police officers, led by Entebbe district police commander Michael Kasigire directed Muntu's convoy to turn to Katabi-Kitubulu playground. Muntu says the ruling government is blocking campaign meetings of President Yoweri Museveni's rivals out of fear.

"He [Museveni] does not want candidates to access people neither physically nor through media channels because if they had wanted to clamp down because of COVID, it would have been understandable if they opened channels where they would buy airtime on radio and TV and allow the other 10 candidates to access the population through TV, through radio. They have not provided a budget, they are clamping down, today we were supposed to go to Nakiwogo, to Kitoro and Kigungu but they cut off because they are open grounds because that is where the population centres are," said Muntu.

He also adds that the government is selectively enforcing the COVID-19 measures to block voters from accessing opposition candidates. Muntu asked the Electoral Commission to take action against the security personnel blocking their campaign meetings.

"So they cut you off, they put you in an isolated area, where people are doing their jobs, they are not going to be coming every time a candidate comes. They send you away from the population centres. Why? To deny people the information. It has nothing to do COVID. I really would like Gen Museveni to come, let him come with his security and all of us the 10 and we visit Kikuubo. Let him keep on pushing the argument of COVID, Kikuubo is like a rally on a daily basis, the only difference is that there is no platform, there is nobody holding a microphone speaking to the people. Kikuubo there are thousands there on a daily basis, I have not heard the regime going there to put measures to control the spread of COVID," added Muntu.

Some of the ANT candidates led by Wilberforce Seryazi who is contesting for the Entebbe municipality MP seat and John Ssimbwa, the ANT Entebbe municipal mayor candidate, said that they had mobilized people to attend Muntu's meetings. They are however not surprised that the meetings have been blocked.

Seryazi says the ANT leaders in Entebbe faced challenges to secure venues for Muntu's meetings ahead of his visit. Some NUP supporters who include Sylvia Namayanja and Milly Namuwaya who reside in Kitooro and Kigungu respectively are angry that Muntu's meetings were blocked.

They said the Electoral Commission should come out and declare their position on the matter of blocking presidential candidate rallies. Muntu later addressed the crowd that gathered at Katabi-Kitubulu playground for close to three hours and thereafter departed for mini rallies in Seguku, Masajja and Zana in Makindye-Ssabagabo municipality.

Mugisha muntu it's your fault you blindly put this old killer man.
Report to administrator
0 #2 rubangakene 2020-12-01 13:25
Too close in one's backyard for comfort? Can you imagine the "panic"; even your houseboys, shamba boys will hear about your legacies and lies.

Imagine the conversations/laughter at 'marua' and 'waragi' gatherings in the evenings that follow; "OWANGEE, KUMBE, HAKIAMUNGU! NOW WE KNOW!"
Report to administrator
0 #3 Lakwena 2020-12-01 17:40
In other words, Gen Muntu has not yet understood his former boss' Biology and the doctrine of "Covidism Ideology"; when he said:

"... I have not heard the regime going there (Kikuubo) to put measures to control the spread of COVID," added Muntu".

Unfortunately it is the "Regime" Muntu and the Tumukunde of this country risked their lives, saluted and installed Gen Tibuhaburwa a life and death president of the Republic of Uganda.
Report to administrator