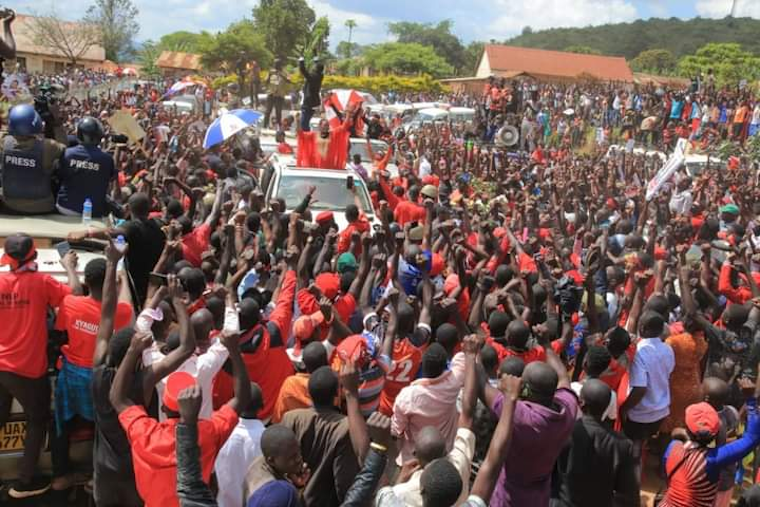 Kyagulanyi on Thursday spent the night in his car along the road in Migyera town council in Nakasongola after police blocked from accessing hotels in Nakasongola. It all started when upon reaching Migyera town at 9 pm, police officers and soldiers of Uganda People's Defense Forces (UPDF) commanded by the officer in charge of Migyera police station only identified as Byaruhanga blocked Kyagulanyi and his entourage from entering the town.

Kyagulanyi pleaded with security personnel to allow him to proceed to Masindi or Hoima to find accommodation but police refused, saying that it was now curfew time. Kyagulanyi and his team decided to spend the night in cars whereas others slept outside in cold.

This morning at around 7 am, the policemen commanded by Nakasongola DPC Namara besieged Kyagulanyi who was briefing his team and ordered him to vacate the area with immediate effect. Namara told Kyagulanyi that he is expected in Nakasongola on Saturday and he will have enough time to talk to people as scheduled.

But Kyagulanyi accused DPC Namara of being indisciplined and mistreating him to an extent that he forced him to sleep out in the cold and on the road.

“Don’t be rude to us, we are Ugandans," Kyagulanyi fumed at the DPC. "Stop treating me like a foreigner. Be an officer of the law, I slept in a car and am briefing my team. Don’t provoke us, be disciplined Namara."

Namara ordered Kyagulanyi to brief his team and leave quickly but she was instead booed. Kyagulanyi later told his team to refrain from engaging any police personnel because they want to provoke him to react angrily and then frame them as criminals. He directed his team to board their cars and proceed to Kyankwanzi where they would get breakfast along the way citing hostility in the town.

After the exchange, Kyagulanyi and his team later boarded their vehicles and proceeded to Kyankwanzi for campaigns. According to the campaign schedule, Kyagulanyi is expected to campaign in Nakasongola on Saturday. However, there is already tension across the area with security personnel already on the ground ahead of the campaigns.

The police confrontations with Kyagulanyi continued further on Friday after the NUP candidate was blocked from holding rallies within major town councils in the Greater Luweero districts. According to Electoral Commission campaign programme, NUP presidential candidate Robert Kyagulanyi Ssentamu is expected to campaign in Nakasongola, Luwero and Nakaseke districts on Saturday and preparations are already underway in the districts to welcome him.

But Brenda Nabukenya, the NUP coordinator for Luweero district reveals that they had planned to organize rallies within playgrounds located in major towns but police have since blocked the move.

Nabukenya explains that in Luweero town, they had organized a rally at Luweero Boys primary school, but police refused and instead directed them to shift to Ngogoro playground which is in Butuntumula sub-county. Some NUP supporters in the district who were holding drives mobilising supporters to attend tomorrow's rallies have been arrested.

Ivan Kyeyune, the NUP candidate for Nakasongola county says that Kyagulanyi has also been blocked from holding a rally at Nakasongola RC primary school in the town council and shifted to grounds which act as a cattle market located at Lwamutoogo village in Wabinyonyi sub-county, a sparsely populated area.

Kyeyune adds that several residents have been warned by security not to attend the rally. Kyeyune adds that the move is intended to ensure that Kyagulanyi doesn’t make inroads in what is considered as the ruling NRM party strongholds. Another planned rally in Migyera town was called off after police advised organisers to hold their campaign rally in Lwabyata sub-county which is sparsely populated.

Other expected rallies in Semuto and Kapeeka towns have also blocked. Kyagulanyi is expected to campaign for only three hours in each district and directed to stick to only the listed venues. Processions through villages also blocked. There already indications that roads heading to venues will be restricted to stop of the influx of supporters.

Tension is mounting in the town councils and several business owners have indicated that they won't open over fears that there could be clashes between supporters and police for blocking Kyagulanyi to access them. Paul Mukungu the LC III chairman of Luweero town has faulted police for creating unnecessary panic among the public. He pleaded with police not to fire teargas in towns because it was not necessary.

Isah Ssemwogerere, the Savannah Region police spokesperson advised NUP supporters to respect the coronavirus guidelines else they will be arrested. Ssemwogerere says that policemen and UPDF soldiers are already on ground to keep law and order. Nakasongola is a stronghold for NRM where President Yoweri Kaguta Museveni scored 84.46 per cent in 2016 elections whereas his main rival Kizza Besigye got only 13.79 per cent.

However, Kyagulanyi is making inroads over unfulfilled pledges of Museveni to the area. NRM officials backed by security officials are already demobilising residents not to attend Kyagulanyi rallies.

Our game changer Mr. Kyagulany, God Bless you with your family and the entire NUP supporters.

This is why Mr Kyagulany MUST ensure the tribalistic is brought down, then sing Ugndans to UNITY, if Museveni is to be gor rid, knowing developed world & UN won't continue to watch what goes on in the tribalistically divided & ruled Uganda insilence any more!

Do Ugandans want to be part of today world or not?
Report to administrator
0 #22 Miki 2020-11-29 18:09
Juwaiti Kali, Museveni's play book has been such that he broke up, and then remade all civic and government institutions in a way that serves him and him alone.

With such total control of government machinery and all other institutions there can only be personal opposition to him.

Individual opposition devoid of strong institutions and organization, or one where the opposition has already been thrown in a disarray, and is weak makes it nearly impossible regardless of who the individual is.

Museveni cannot be dislodged without strong external factors supplementing the scattered opposition at home. And there are no strong external factors working against Museveni at the moment. And he knows this.
Report to administrator
0 #23 Juwait kali 2020-11-30 00:06
Am lost for words MIKI. Opposition in disarray?? Have you seen him today calling police men and women who kill and teargas his opponents corrupt and useless.

Is that a man in control. When was the last time M7 visited the white House. Why are all leaders of strong nations stopping next door in Kenya and not UG.

And tell me who organises those huge crowds all over the country if the opposition is weak. Let me remind you that the Iranian revolution ousted someone who was being backed up with those external factors you have mentioned.
Report to administrator
0 #24 Juwait kali 2020-11-30 00:27
And mwaami MIKI the man you call god disagrees with you, and i quote " I will not allow criminals who are supported by foreign interests to ‘disturb Uganda"

Those were his words as part of his speech. If that is not strong external factors i don't know what it is.
Report to administrator
123