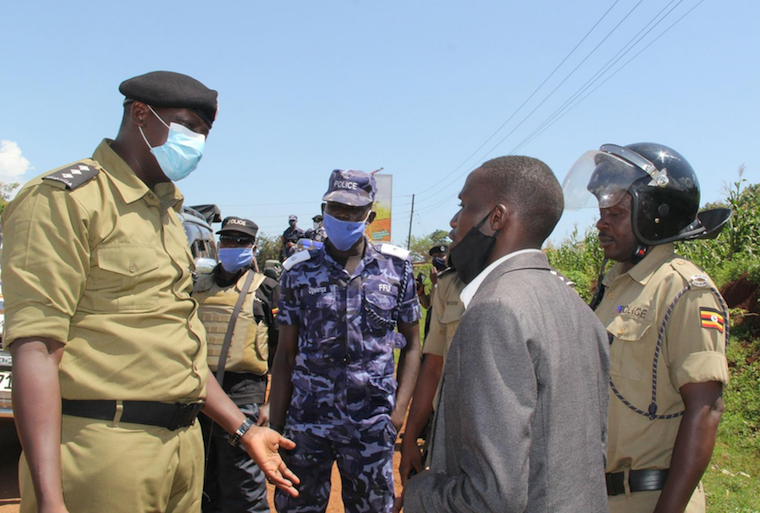 Independent presidential candidate, John Katumba spent the better part of Thursday in running battles with police after being blocked from addressing his supporters in Iganga and Jinja districts.

Katumba started with a procession along Iganga Main street. However, police intercepted his vehicle and blocked him from conducting his activities. He jumped out of his vehicle and fled to the market, forcing his Electoral Commission escorts and police officers to run after him.

Police led by Kenneth Muheirwe, the Iganga district police commander (DPC) managed to arrest Katumba before escorting him out of Iganga town. At around 1:30 pm, Katumba made his maiden visit to Jinja city with stopovers in Bugembe and Mailo Mbili where he addressed dozens of his supporters.

He later drove to Jinja central business area and again jumped out of his vehicle, however, police officers led by the in-charge of the Jinja city police station, Moses Kamomo arrested Katumba and directed him to return to his vehicle. Kamomo argued that Katumba was not supposed to hold campaigns in Jinja today.

“The EC program indicates that Katumba is supposed to campaign here on Friday and we were surprised to see him campaigning here,” he says.

Katumba however, claims that he was trying to book cheap hotel rooms for his entourage in Jinja city’s downtown areas of Obote Way and Spire road when police officers intercepted him.

"They threw me out of Igaga town where I was supposed to hold my campaign. I came to Jinja to have something to eat because Jinja is my next destination. However, even in Jinja, the moment they saw me, you saw what happened. Me, am of a view that we can't afford this situation having encountered it. If police is one-sided then I don’t know what to do because if it was another party it would be different. Even in Arua it was also a tug of war," said Katumba.

Katumba was forced out of Jinja town through the Nile Bridge and cautioned to follow his campaign schedules.

Poor guy, just look at him, he is like a dog barking at an elephant
Report to administrator