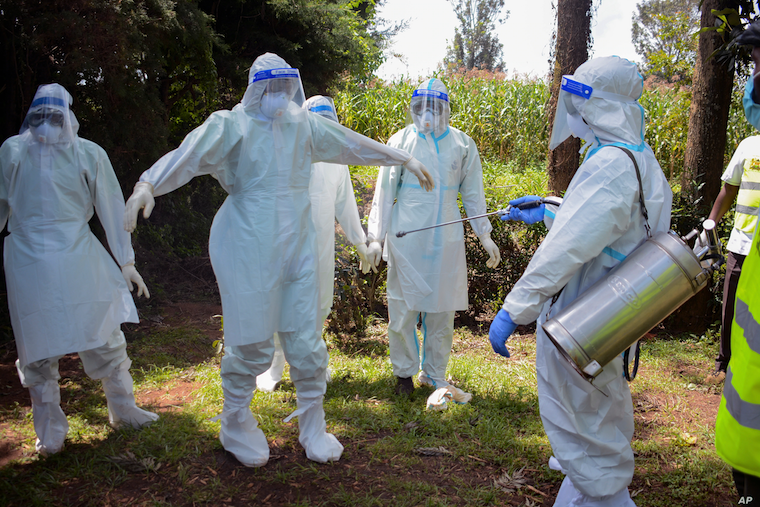 Kenyan doctors are threatening to go on strike next month unless the government addresses their concerns about safety, health insurance, and staffing needs to fight COVID-19. The threat comes after at least 10 doctors died from the virus this month.

Speaking to reporters in Nairobi Tuesday, the secretary-general of the Kenya Medical Practitioners and Dentists Union, Chibanzi Mwachonda, said his members plan to go on strike because the government is not giving them medical insurance.

“If these doctors are not covered, then this strike will kick off until the time that they will be covered,” Mwachonda said.

Kenya has lost 32 medical workers to COVID-19, at least 10 of them in the last two weeks. The deaths have angered medical workers. Andrew Watende lost his younger brother to the disease. His late brother, a doctor, worked at the University of Nairobi. After seven days in the hospital, he died.

“I think because of other comorbidities he was in the category of severe disease, he got the best attention he could but I think still because of comorbidities he developed hypoxia with saturation which were low. Then when they were trying to intubate he passed on,” Watende said.

Doctors also complain about not receiving adequate personal protective gear. The union says all their requests are met with silence. Recently, President Uhuru Kenyatta opened a new health facility with 100 beds for United Nations staffers and the diplomatic community.

Meanwhile, some Kenyans say they were turned away at health facilities and advised to take care of themselves at home. Mwachonda is calling on the government to employ at least 2,350 doctors and medical workers to attend to the sick in various hospitals across the country.

“There is an acute shortage of doctors in this country in each and every county and our demand that each county must employ at least 50 doctors to cover for COVID and for the other services. If this is not addressed equally, we shall be on strike come on the 6th of December,” Mwachonda said.

The Kenya Nurses Union has also issued a 14-day strike notice. The union is demanding compensation for the families of 18 nurses who died from COVID-19 and salaries for some nurses, who have not been paid for months.

The head of the National Assembly Health Committee, Sabina Chege, said Kenya cannot afford to see doctors not working during this challenging period.

“It’s not a unique situation where doctors are feeling that they are not taken care of by the government. At what point do you say it’s optimal or enough? It can never be enough but people can try, and we can’t manage everything. Let's look at what is the priority, what can we be able to do for now, what can wait for a month or two then we can have an agreement.  I don’t think the strike will solve anything. We’ll lose more life and nobody is safe,” Chege said.

Kenya has recorded 77,800 coronavirus cases and 1,400 deaths since March. A parliamentary committee will meet Wednesday with county governors and other officials to discuss ways to avert the strike.