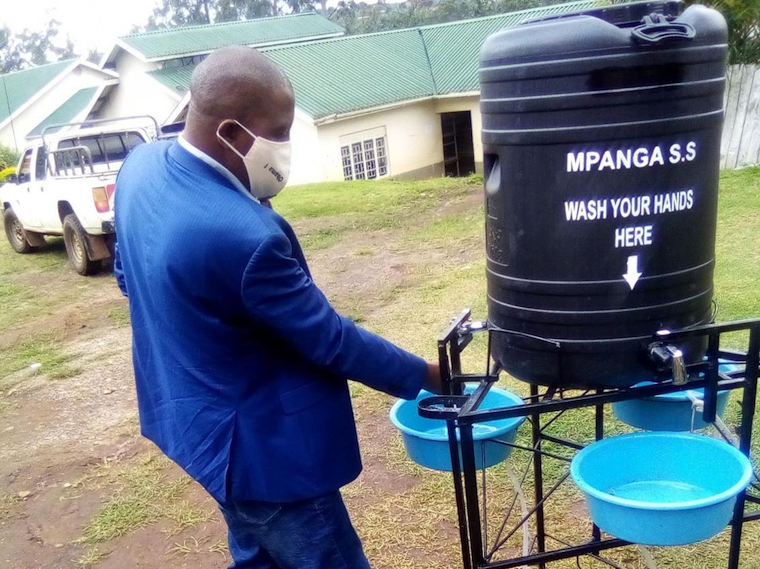 An inspector checking the functionality of washing facilities at a school

A section of parents wants government to reopen schools for all learners instead of purchasing radios for home-based electronic learning. In September, President Yoweri Museveni ordered for the reopening of schools but only for candidate classes and finalists. The schools had been closed for more than six months since March due to the coronavirus outbreak.

Museveni also said that the ministry of Education is going to ensure that the home-schooling programme is to ensure continued learning. The said learning will be through radio and television broadcast lessons on top of self-study materials that are going to be distributed.

He also said that plans are underway for government to provide at least 9 million radio sets to every household and 137,466 solar-powered television sets to villages. On Wednesday last week, parliament’s Budget committee declined to approve Shs 336.8 billion supplementary budget request by the government to purchase 9 million radio sets for Ugandan homes to facilitate the long-distance learning program. The MPs questioned the source of the money and the capacity of Ugandan factories to produce the radios.

"I have children, some are candidates and they have already gone back to school but I studied them. After May, if they could not concentrate on TV for lessons what about radios? It will be a waste of government money, taxpayers money actually and I would rather advise that let them study the situation and assess the health standards now that we even have some classes that already at school. If they find that there is a way we can cope with the pandemic, it would be better to reopen for the rest of the children who are still at home than going in for radios. It would be a wastage of time, they can’t concentrate on radios," said Senono.

Grace Nyendwoha another parent notes that schools should reopen because they don’t trust the government’s promise of providing radios. She says that up to date, her family has never received the promised free government face masks or food.

"Look at the masks, actually, me I have not been putting on a government mask, am just getting it now. I did not get any mask. So it is also going to be a challenge. Some people may get radios and others may not. Look at the [relief] food, there are those who got food and there are those who did not get food. How are they going to distribute these radios into homes? Are they sure that each and every home will get a radio? I don’t know whether the children are going to benefit. You might find that somehow the people who are going to get radios are those ones who are closer to the LCs or those related to the people who are giving out radios," said Nyendwoha.

Cyrus Ssebagala a parent also says that the government should instead use the funds meant for radios to ensure that schools put in place the required SOPs and let the learners return to school.

"It would not help because according to what I see, to spend that money by buying radios that is very difficult rather than opening schools it would have been fair to open schools for all children," Ssebagala said.

Harriet Nabweteme says that the lessons on the radios are not conducive for learners, especially in rural areas. She says that the schools should re-open to enable learners to interact physically with the teachers.

Govt save the next generation.
Report to administrator
0 #2 Wainanchi 2020-11-24 10:23
How can schools be opened when people are dying like flies from Covid 19?

Which parents are so dumb to cry and appeal such STUPIDO demands? Must be they are fools when they want their loved ones to get infected.

Better to have radios and stay indoors and listen to educational programs . Once radios have been donated special programs in all languages and dialects in Uganda need to be programmed like Zoom on RV or internet Parents need to work with their children in literacy and mathematics.For example how many of them know how much is 5 × 6?? Let's get.!!?
Report to administrator
0 #3 Wazza 2020-11-24 10:46
I think you are wasting time. They will procure the radios whether you need them or not.

Your needs are non of the mafia's business. The money is already earmarked for sharing. There is nothing much schools can do. Very sad!!
Report to administrator
0 #4 Larry Mike 2020-11-24 11:31
Yet another scheme. Where are the free masks? Why not use this money for the covid vaccine? Shameless scheme artists.
Report to administrator
0 #5 WADADA rogers 2020-11-24 22:07
ekyo kyebayita edobozi elyomwanguka, what is the use of a radio when there is no power, when poverty has taken away all the money that would be used to buy radios. No more lies
Report to administrator
0 #6 Larry Mike 2020-11-24 23:32
Middle income status and Ugandans can't afford to buy radios from money generated from operation wealth creation, mwena mugagawale, mwena musome???

With all the progress we surely don't need a supplementary budget of that magnitude for a friggin radio.
Report to administrator