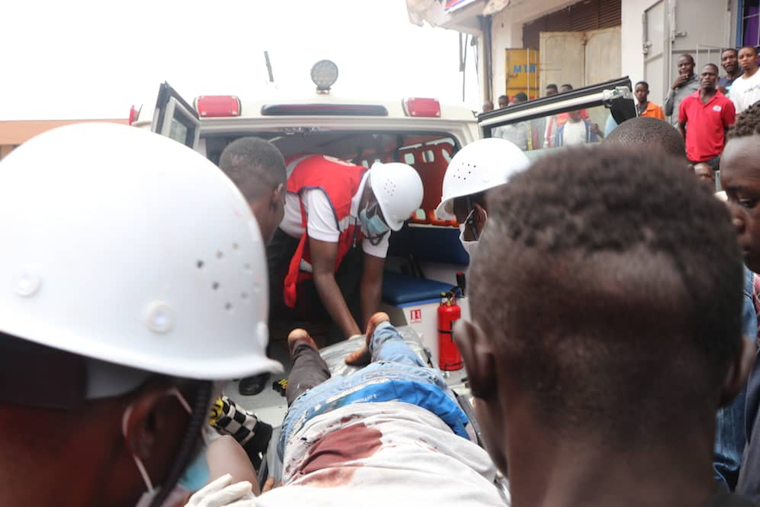 Victims who sustained gunshot injuries during this week's city protests in Kampala are seeking compensation from the government.

On Wednesday, protests broke out in many parts of Kampala and the rest of the country following the arrest of National Unity Platform presidential candidate Robert Kyagulanyi Ssentamu alias Bobi Wine. Police and the army used tear gas and live bullets to quell the protests leading to the death of more than 50 people and over 100 injured.

Peter Oguyi, a boda boda rider in Kisenyi, says that he was hit shot in the leg near Kisenyi health centre. He explains that he was first admitted at the health centre before he was referred to Mulago hospital, where he has now spent four days. Oguyi now wants the government to compensate him. He says that the motorcycle he drove was acquired through a loan.

"An army vehicle drove from Lubiri towards us while shooting and they parked near Hass petrol station. I was standing behind a container when a bullet hit me. They shot it through the container. I felt a slight pain and decided to go upstairs [Kisenyi health centr]. The doctors noticed that I was oozing out blood," said Oguyi.

Leopold Nyakahuma, who deals in spare parts in Kiseka market, where the riots started from, narrates that when the chaos erupted, he closed his shop and boarded a boda boda taxi to go home but his journey was cut short when a police officer shot at the boda boda rider. According to Nyakahuma, when the boda boda rider was shot at, he lost control and they both fell off the motorcycle.

"They ordered my boda boda rider to stop but he panicked and refused to stop and that is when somebody on a police patrol vehicle shot him and he fell down. Obviously, when the rider fell down I also fell down. Because I was scared I got up to run but got shot in the left leg first but I was still able to continue running. He then shot my right leg and that is when I got completely immobilized. He then carried me and dumped on the police pickup and pepper-sprayed in the face before driving me to Wandegeya police station. On seeing me in such a condition, the OC ordered them to take me to the hospital. They then brought me here in Mulago casualty ward. I have a family to look after, government has got to compensate us. I was not involved in the protests. They shot and killed innocent people, I was not involved in anything and now I have to spend months on the sickbed," said Nyakahuma.

Musa Kasolo, a brother to one of the patients says that the government should take care of his brother’s five children.

"My brother Ssenkayi was shot from the parking lot and bullets were shot from the top. Government has to compensate him because he has five children and now he can’t work anymore," says Kasolo

While visiting the causality ward at Mulago hospital on Thursday, Dr Joyce Moriku Kaduchu, the state minister of Primary Health Care, said the government would pay the costs of treatment for the victims.

Year after year NRM people sheeply follows m7 as the only person who can contest for president or be head of NRM party.

Are you suggesting that out of millions of people including you are complete idiots that only one person can contest every year and rest are just his sheep?
Report to administrator
12