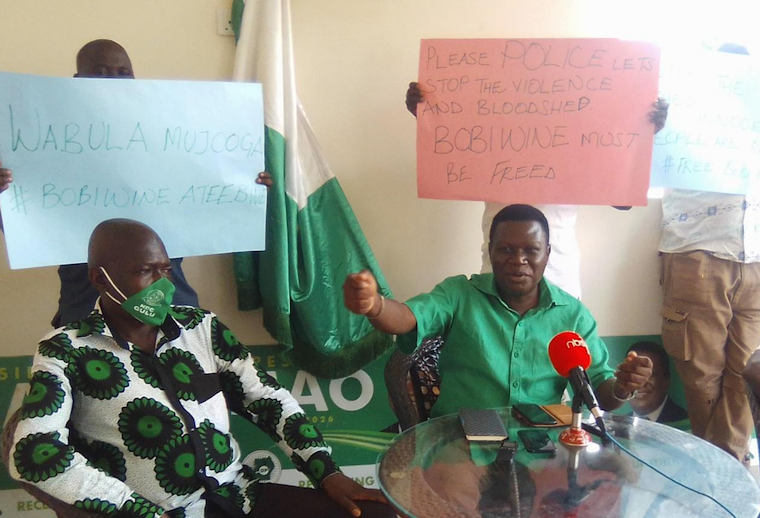 Kyagulanyi who was arrested yesterday morning from Luuka district headquarters is yet to be released or charged in courts of law although police indicated that he was arrested for allegedly flouting coronavirus disease standard operating procedures (SOPs).

Security violently responded to the protests by firing teargas and live ammunition which led to the death of at least 19 people within just Kampala and over 68 injured and nursing bullet wounds.

Mao says he cannot continue traversing the country soliciting for votes amidst the ongoing bloodshed. Mao who was scheduled to campaign in Hoima and Kikuube districts on Thursday, says all his rallies have been suspended until further notice.

He made it clear that the ongoing tension in the country is a clear manifestation that Ugandans are tired of the current National Ruling Movement (NRM) government headed by President Yoweri Kaguta Museveni and therefore calls for a peaceful transition of power.

He says the killing of innocent Ugandans by security operatives must strongly be condemned adding that the police and other security agencies should stop being partisan in politics. Mao has advised the police to ensure by all means that they stop the violence by not surrendering their constitutional duty to armed civilians who he says are currently taking charge and recklessly shooting at innocent Ugandans.

The DP party president has further tasked the Electoral Commission to suspend the 2021 general elections saying where the country has reached, the outcomes of the elections are not going to give a levelled ground to Ugandans.

Mao pledged that if he resumes campaigns and is elected president, his government would establish a public university in Bunyoro subregion.

He says it is very absurd that the NRM government that has been in power for the last 35 years has failed to establish a public university in Bunyoro yet it is the region where Museveni gets a lot of votes. He too pledged to ensure that Bunyoro gets a special revenue sharing on Oil following the discovery of the resource in the region.

When that level is reached, then this government will see the sun only for a short while. The clever ones have to start packing. Time to go.
Report to administrator
+1 #2 Akao 2020-11-19 21:47
Now they should boycot the useless election.

And everyone should come togather and demand Museveni to leave just like a lot of countries have gotten rid of their dictators
Report to administrator
+1 #3 Larry Mike 2020-11-20 11:27
Is Mao really running for president? I see Mao like I see fake pastors.

Whether he suspends or doesn't suspend his campaigns, he lacks any substantial following. In fact, all candidates should rally behind their only hope. That hope is Kyagulanyi.
Report to administrator
0 #4 Lakwena 2020-11-20 13:09
I want to disagree with Mao and his campaign on Public University in every District/county in Uganda. This is because a university is not a polytechnic.

E.g., when Makerere University was the only university, but there were polytechnical colleges throughout the 4 corners of this country, there was no such a thing as unemployment.

By the fact that there are now more so call universities, than poly technical colleges, which have been neglected and/or abandoned by Mr. Tibahaburwa regime for the last 35 years; it is self-evident, there is a bewildering widespread unemployment in the country.
Report to administrator
0 #5 Lakwena 2020-11-20 13:22
Like a concealed sabotage, the so many universities in Uganda, is the cause of the current unemployment. And not the solution: Too many heads without bodies (too many Chiefs but no Indians)

In other words, because of lugezi-gezi, reactionary and unexamined anti colonial sentiments, many of our current politicians and/or technocrats; either forgot or didn't understand the value of, and simple principles of "Development Studies" in the famous book: "Africa Learns About Europe", by: H W Richmond Hawes (1961).
Report to administrator
0 #6 Lakwena 2020-11-20 13:42
Quoting Ainebyana:

These are not election campaigns. The government is killing its innocent people.

When that level is reached, then this government will see the sun only for a short while. The clever ones have to start packing. Time to go.

In other words Ainebyana, before it is too late. Janet Kataha Tibahaburwa should start packing her bags and Gen Tibahaburwa's suitcases and busheera stainless steel mugs.

Otherwise, after Muhoozi has fled town without a shirt on; many Ugandans are looking forward to see Gen Tibahaburwa being chased with brooms (not guns) and caught up with, when one of his legs is stuck in one of KCCA manhole covers.

Eish, no sympathy: they have invited it.
Report to administrator
0 #7 WADADA rogers 2020-11-20 21:41
if we were living in an organised country and Legally speaking, M7 should have handed over power to VIce President but knowing that Sekandi is a white elephant, M7 continues as President and candidate at the same time.

Ordinarily, the powers of a sitting President who wishes to contest for another term should be cut down such that he is equal to the other candidates in the race. Now i hear he is going to address the nation, as who? You cant make the rules at the same time remain a player in the game
Report to administrator
0 #8 Lakwena 2020-11-21 13:13
Quoting WADADA rogers:

if we were living in an organised country and Legally speaking, M7 should have handed over power to VIce President but knowing that Sekandi ...

Ordinarily, the powers of a sitting President who wishes to contest for another term should be cut ...

Wadada, in other countries like South Korea; the president is immediately prosecuted for any slighted infraction of of the law e.g. corruption and sent to jail.

Because of such a law, apparently all South Korean Presidents, including the 1st Female, Park Geun-hye, who visited Ge, Tibahaburwa; was in Dec 2016 impeached and now serving a total of 37 years behind bars.
Report to administrator
0 #9 Lakwena 2020-11-21 13:18
She was even sentenced to an additional 2 years in jail, for interfering with internal party primaries, like what we saw Tibahaburwa did in the NRM primaries.

In other words, after the only Problem Africa, Gen Tibahaburwa is ejected from our State House, the constitution must be amended and forbid the incumbent immunity from prosecution and removal from office.

Otherwise, even kings anointed by Popes and/or prophets used to be beheaded for exploitation, committing abomination and crimes against humanity.
Report to administrator